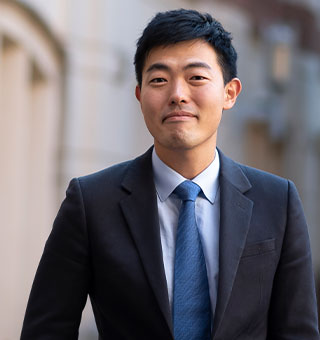 Will Moon, JD, is an associate professor of law at the University of Maryland Francis King Carey School of Law.

Moon’s teaching and research interests include contracts, corporate law, and private international law. His current research focuses on corporate charter competition, documenting the rise of offshore jurisdictions competing in the emerging international market for corporate law. Recent published works include “Delaware’s Global Competitiveness” in the Iowa Law Review and “Delaware’s New Competition” in the Northwestern University Law Review. His other scholarship has been published in student-edited law reviews, including the Michigan Law Review and the Vanderbilt Law Review, and in peer-reviewed journals, including the European Journal of Law and Economics and the Journal of International Economic Law. In 2021, Moon was voted Professor of the Year by Maryland Carey Law’s Black Law Students Association. Moon is a member of the Diversity Advisory Council (DAC) and is committed to promoting diversity and inclusion in his law school teaching.

Moon served as an acting assistant professor in the Lawyering Program at New York University School of Law from 2016 to 2018, when he joined Maryland Carey Law. Prior to entering academia, Moon worked as a litigation associate at Boies, Schiller & Flexner, LLP in New York City, where he specialized in cross-border commercial disputes. From 2013-14, Moon served as a law clerk to Judge Joseph A. Greenaway Jr. of the United States Court of Appeals for the 3rd Circuit. Moon holds a JD from the Yale Law School, where he served as a senior editor of the Yale Law Journal and a Coker Fellow. He received a BBA from the Stephen M. Ross School of Business at the University of Michigan, where he was the founding editor-in-chief of the Michigan Journal of Business.