Each year, UMB commemorates the legacy of the Rev. Dr. Martin Luther King Jr. by recognizing individual or group achievement of faculty, staff, and students whose work epitomize the ideals, life, and work of Dr. King.

This celebration reinforces UMB’s commitment to diversity, equity, and inclusion by honoring those whose personal or professional work demonstrates extraordinary and sustained dedication to these ideals. An inspiring keynote message is delivered by a distinguished leader or scholar in the field of diversity, equity, and inclusion. The program also highlights the oratorical and scientific skills of students attending West Baltimore public schools.

Brown, a research scientist, educator, equity scientist, and urban Afrofuturist who is the keynote speaker Feb. 8 at the University of Maryland, Baltimore’s (UMB) Rev. Dr. Martin Luther King Jr. and Black History Month Celebration, was examining a map of Baltimore’s racial geography when he drew circles around parts of the city.

“As soon as I did that, I looked at the pattern of green dots, which represented African Americans, and that pattern in East Baltimore and West Baltimore looked like the wings of the butterfly,” said Brown, who also noticed the middle was an “L” shape of white neighborhoods. “It seemed very apparent to me that this was a pattern I could refer to if I want to talk about how Baltimore is very segregated.”

He was further inspired by rapper Kendrick Lamar’s album To Pimp a Butterfly.

“I thought about his title, which signified for me how something beautiful can be exploited, damaged, and harmed. So I coined the phrase in that moment, ‘Black Butterfly.’ With that thought in mind, here’s something beautiful: Black neighborhoods that are being harmed and exploited by different policies and practices like redlining, subpriming, hyperpolicing, and hypersegregation.”

Brown, who works for the new Center for Urban Health Equity at Morgan State University, published his first book, “The Black Butterfly: The Harmful Politics of Race and Space in America,” in 2021. The book examines Baltimore’s history of segregation; the policies, practices, and systems that caused it; and its impact on the health and well-being of the city’s Black residents.

In it, he writes that “racial equity starts with a reckoning.”

“A reckoning entails starting with an accounting and historical analysis that says, ‘Here’s what was done,’ ” he said. “Then there’s an acknowledgment that ‘Yes, we did this, and now we have an obligation to repair and commence that process.’ ”

Brown says he wants readers to walk away from his book with an understanding of his five steps for a racial equity process: a deep historical understanding of the trauma inflicted; identifying and stopping all forms of trauma; making decision-making participatory and democratic; ensuring community ownership and wealth-generating stake in all programs; and making corrective budget allocations to heal the damage of the historical trauma.

“Equity should not be this fuzzy-wuzzy, feel-good concept,” said Brown, who was honored in 2018 with a Bold Thinker award by Open Society Institute-Baltimore for sparking critical discourse regarding Baltimore’s racial segregation. “Diversity, equity, and inclusion shouldn’t be a check-the-box exercise. It involves real work with the deep understanding of making decision-making participatory and then making sure that budgets are reallocated to help heal and repair the damage that was done.”

For his Feb. 8 virtual speech at UMB, Brown intends to talk about King’s principles and how they can be used to address inequalities and inequity in Baltimore. He will highlight one of the central issues that King fought for: fair housing.

Brown said that legacy is still being felt today as Black communities have been affected disproportionately by the COVID-19 pandemic.

“The ZIP codes that were being hit are in the butterfly; the majority of the people that were dying were in the butterfly,” said Brown, adding that COVID-19 also greatly affects rural areas. “Places that had lower levels of resources are where people were the most exposed and experienced the greatest burden due to COVID-19.”

He pointed out that Baltimore’s legacy as the first city to pass a residential racial zoning law in 1910 still resonates with other hypersegregated cities that followed Baltimore’s lead.

“COVID has impacted other cities, which are also hypersegregated in large part due to the example that Baltimore set,” Brown said. “This virus is not only having an impact on our city, it also has an impact on the nation. And that’s a part of that reckoning that has to be really wrestled with.”

“The irony is that 100 years later, you have a pandemic that is impacting communities in part that were racially segregated based on the field of public health itself,” Brown said. “And that cycle, that circle, that reckoning also has to be recognized.”

A Connection with King

Brown, whose mother is a minister/pastor and whose grandfather was a Baptist pastor, said he felt a kinship with King because of their similar backgrounds.

“I was very influenced and enthralled by his social justice, or the social gospel, because I’m a product of the Black church,” he said.

He said his favorite King speech is “The Other America” in which King says there are two Americas — one white and one Black — and that America “has failed to hear that the promises of freedom and justice have not been met.”

“He’s speaking to the anger, the frustration. He says, ‘A riot is the language of the unheard.’ He’s speaking much more about here’s the root of our civil unease, our civil disorder, our urban uprising. That’s where you get this powerful sociological analysis,” Brown said.

In his position at Morgan State, Brown is working on the Black Butterfly Rising Initiative, which builds on the information in his book. The project includes developing a history exhibit about Baltimore and creating a website called the Black Butterfly Data and Impact Hub, where users could look at statistics such as bank lending, rent and mortgage burden, and crime.

He is also working with colleagues at the University of Chicago on a mapping project examining America’s legacy of apartheid.

“I want to have national maps that highlight what happened to Black people or Black neighborhoods so that researchers and others can begin to have a much greater appreciation of how Black spaces and Black communities have been impacted,” he said.

“It’s saying, ‘Here are practical steps you can take; policies, practices, systems, and budgets that you can employ; approaches you can take to improve Black neighborhoods, Black spaces, Black communities,’ ” Brown said. “That’s the overall vision of what the Black Butterfly Rising Initiative is all about.” 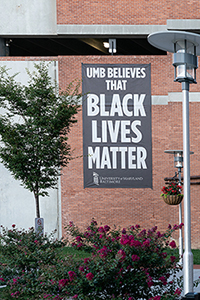 The “UMB Believes That Black Lives Matter” banner that was hanging on the Health Sciences and Human Services Library (HSHSL) since the summer of 2020 has been moved to a new location. 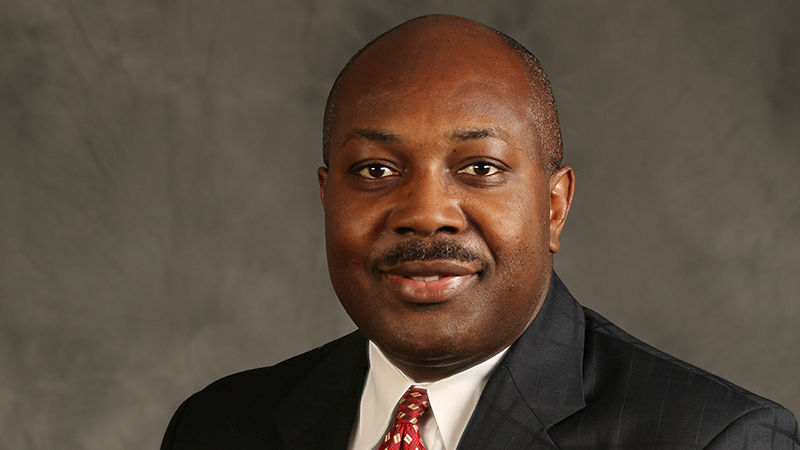 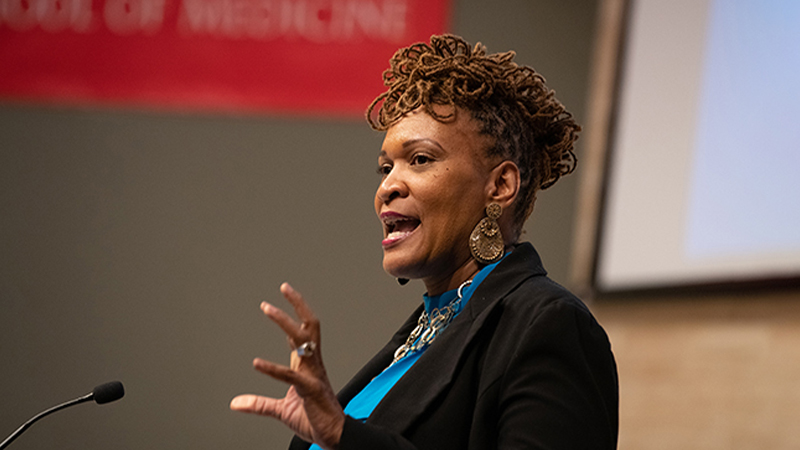 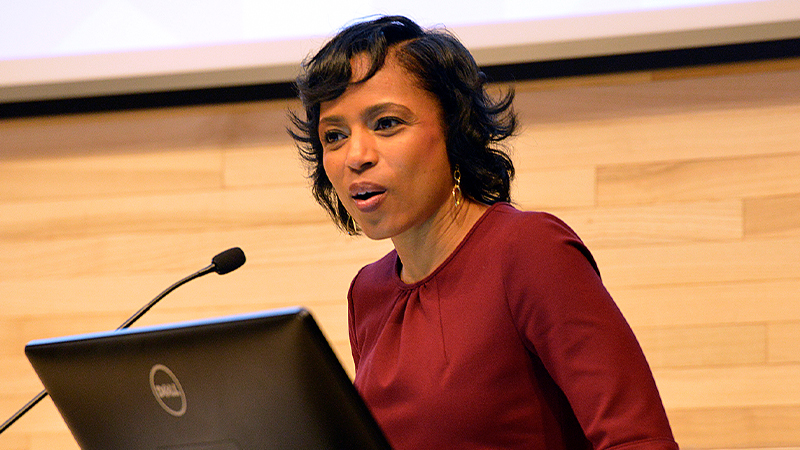 Don't see the speaker you're looking for? Check out the MLK/BHM Celebration Speaker Archives.