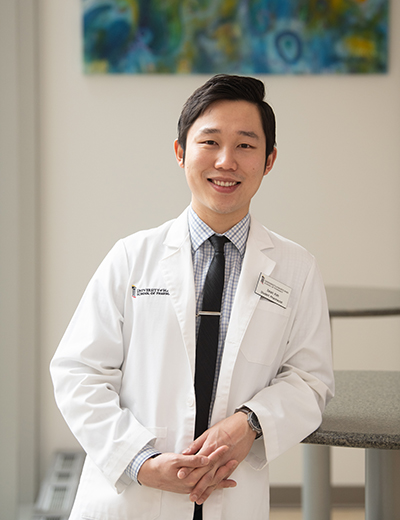 When Sean Kim arrived in Atlanta as a 16-year-old foreign exchange student in 2007, he was placed with host families who instilled in him the values of inclusiveness, engagement, and leadership. Fifteen years later, as a University of Maryland School of Pharmacy (UMSOP) student, Kim lives those values every day.

“When I came to the United States from South Korea, I was fortunate to meet two loving host families who raised me as a part of their families and taught me about intercultural competence,” said Kim, who is pursuing a Doctor of Pharmacy degree as part of the Class of 2023. “They showed me the way to love different cultures without being biased, which had a great impact on me as a person.”

In less than three years on campus, Kim has been involved in a variety of extracurricular activities focused on leadership and diversity, equity, and inclusion (DEI) at UMSOP. He has served as the Class of 2023 president; Student Government Association secretary and president; co-chair of the Interfraternity Council; member of the school’s DEI Task Force; and student co-chair of the Maryland Pharmacy Coalition.

He also helped to plan the Korean-American Scientists and Engineers Association’s virtual 2021 Young Generation Technical and Leadership Conference and is a student ambassador in the UMSOP Career Navigation Program, helping to organize professional development events and career fairs for students.

On the University of Maryland, Baltimore (UMB) level, serving as a senator with the University Student Government Association (USGA), he worked with the USGA affiliate International Students Organization to petition for changes to international student visa requirements regarding COVID-19 implemented during the Trump administration. He also finds time to volunteer with the UMB Health Alliance, another USGA affiliate in which students work to reduce the gaps in health care access and services, social resources, and legal aid for West Baltimore residents.

These yeoman efforts have not gone unnoticed, and Kim has been rewarded with UMB’s 2022 Rev. Dr. Martin Luther King Jr. Award for Outstanding Student. When he learned of the honor, Kim said he was “ecstatic.”

“It’s hard for me to express how grateful I am to UMB and its Diversity Advisory Council for recognizing me with this award,” Kim said. “It is one of my highest achievements as a student at UMB. The award is given to advance efforts to spread Dr. King’s legacy, which is to foster diversity and inclusion. Winning this award makes me feel I am part of that legacy to carry his dream.”

“His approach to collaboration with the school’s leadership and to problem-solving is thoughtful, earnest, and professional,” she added. “He is an outstanding advocate for students and an important voice at the School of Pharmacy as we continue to manage the ongoing impact of the pandemic on our academic experience.”

Julie Jeong, who nominated Kim for the award, echoes Eddington’s remarks, saying her fellow Class of 2023 PharmD student is relentless in his support of students and continually seeks ways to keep his classmates connected. During the pandemic in his role as class president, Jeong says Kim held virtual office hours to hear students’ concerns and facilitated online meet-ups to foster communication between newer students and upperclassmen.

“Sean raises his classmates’ concerns vocally to the school’s academic leaders, and changes have been made to our learning environments,” Jeong said. “As an international student, Sean also has proven that anyone can become a leader as we take responsibility in our communities. He has encouraged other international students to stand up for their rights, and he has spoken with University System of Maryland leaders regarding difficulties that international students have coming from different backgrounds and the financial difficulties they face because they are not eligible for most scholarships.

“Sean never gets weary from dealing with so many issues, and he is an impartial leader,” Jeong added. “He doesn’t favor one particular group’s opinions and tries to listen to as many groups as he can in his leadership roles. His fairness and genuine heart resonate with everyone who meets him.”

After Kim graduated from high school in Atlanta, he attended Liberty University in Lynchburg, Va., and earned a bachelor’s degree in biology with a minor in chemistry. Interested in the field of pharmacy, he worked as a formulation scientist and pharmacy technician for companies in Lynchburg and Richmond, Va., from 2016 to 2019, before applying to attend UMSOP.

“I enjoyed working in the research and development field but decided to pursue further education so I could make a greater impact in the community where I belonged,” Kim said. “I was attracted to the University of Maryland School of Pharmacy because of the number of pathways, dual-degree programs, and unique courses that are available. I was most interested in the Pharmapreneurship program because it combines traditional pharmacy education with the skill sets and tools used by innovative entrepreneurs.”

To that end, in addition to all of his schoolwork and extracurriculars, Kim has collaborated with two other UMSOP students to launch Travel Rx LLC, a software company that is creating an app designed to simplify access to medication for travelers to East Asia.

“Travel Rx is a startup that emerged from a school project,” said Kim, who in 2021 received UMSOP’s Felix A. Khin-Maung-Gyi Memorial Scholarship for Pharmapreneurship, which provides a full year of tuition to a student who has demonstrated a commitment to entrepreneurship. “As part of our school’s Pharmapreneurism curriculum, we learn how to develop business ideas and perform customer discovery. After graduation, I hope to pursue an executive association management fellowship to advocate for the profession of pharmacy and continuously bring a positive impact to my community.

“When I arrived at the School of Pharmacy, I was happy to be back in academia and apply my passion for learning and being involved with our school and the greater UMB campus,” he added. “I have learned to work with diverse groups of people during my time here, and that has allowed me to grow as a leader and an individual.”

Back to 2022 MLK Diversity Award Winners