Janis Davis sat in the audience Saturday at the University of Maryland, Baltimore (UMB) and watched as her sixth-grade son officially became a UMB CURE Scholar by slipping on the program's signature white laboratory coat.

Michael Davis, a sixth-grader at Franklin Square Elementary/Middle School, wasn’t the first in the family to follow this route. A close relative, Katelyn Paige, was in the first group of students in the prestigious program – now eighth-graders – and she sat just a few rows behind him. 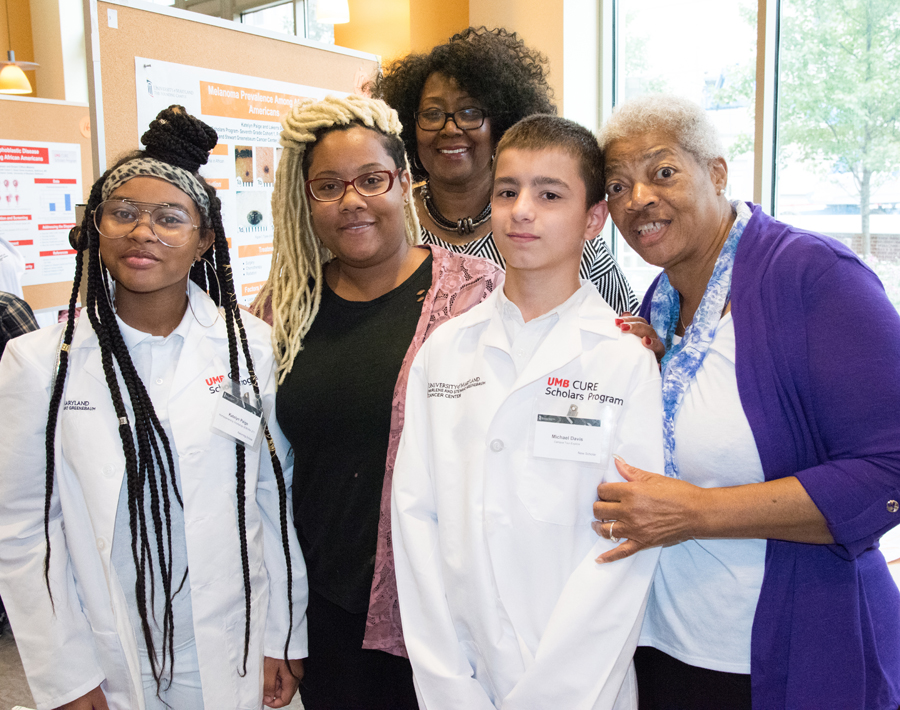 Third year UMB Scholar, Katelyn Paige, and her mother, Karin Soden, stand with Michael Davis, who was just inducted into the CURE Scholars Program, and his mother, Janis Davis, who is also Katelyn's great grandmother. Also pictured is Terry F. Patton, principal of Franklin Square Elementary/Middle, which Katelyn and Michael both attend.

The UMB CURE Scholars Program identifies promising middle school students and provides them with mentoring, workshops, and hands-on experience in laboratories. The goal of the program, supported by the National Cancer Institute’s Continuing Umbrella of Research Experiences (CURE), is to set the students on a path toward a career in the health sciences. This year, 26 new sixth-graders joined the 54 seventh- and eighth-grade scholars.

“It’s a great program,” Janis Davis said. “It gives the kids the opportunity to really see what they can do. They may have a vision, but think they can’t go there. This shows them that it can be done.”

UMB President Jay A. Perman, MD, said the University started the program because talent is universal, but opportunity is not.

“We’ve established that in these students we’ve got talent to spare, but now we have to make the opportunity,” he told the crowd of more than 200 students, family members, mentors, and dignitaries at Saturday’s event. “We have to dismantle the barriers that separate our young people from their potential and from their purpose. We have to give these students what they need to rise, because I’ve seen them rise, and it’s beautiful to watch.”

When entering middle school, Katelyn wanted to go to a private girls school, but now her mother, Karin Soden, sees it was a blessing she wasn’t accepted. The UMB CURE Program has “absolutely” made a difference in her life, Soden explained.

“She went from one of those who wanted to be a singer or a dancer to wanting to be an orthodontist or a pediatrician,” she said of Katelyn, who attends Franklin Square Elementary/Middle. “It changes their future thoughts and career choices.”

Katelyn says that her mentors have helped to guide her and have kept her on the right path.

“I can contact my mentor and she will study with me and make sure my grades are good and ask how I’m dong in school, and she takes us to fancy places,” Katelyn said.

U.S. Rep. Elijah E. Cummings, JD '76, a graduate of the University of Maryland Francis King Carey School of Law who helped launch the CURE Scholars Program at UMB in 2015, attended the ceremony and told the parents how important it is to expose children to these types of opportunities.

Cummings told the crowd, “Not only do we have to help them to dream, we have to show them the off ramp so they can get to the dream.”

Adrienne Kambouris, a second-year MD/PhD student at the University of Maryland School of Medicine, signed up to become a UMB CURE mentor last year.

“I’m from Baltimore. I grew up here and know that mentorship is so important,” she said. “It can open doors you didn’t even know existed.”

After the ceremony, the newly minted CURE Scholars attended a mentor mixer where they could meet the mentors and choose who will guide them through their years in the program. This year, 83 mentors joined the program for a total of 244 CURE mentors.

Charles Armstrong, who is doing research at the School of Pharmacy, heard about the CURE program and signed up to be a mentor for the first time this year.

“I’m originally from Montgomery County, but even with my privileged background, I was always dissuaded from science,” he said. “As an African-American, I want to make sure these students can get the chance.”

While the younger scholars were meeting mentors, the second- and third-year scholars were presenting their Cancer Health Disparities Research Posters to the visitors. The scholars spent the better part of last year researching various types of cancers, which they have become knowledgeable about. The CURE Scholars Program aims to address two major issues: race- and income-based cancer disparities as well as diversity in the cancer health workforce.

"This year's White Coat Ceremony was awesome. To actually witness 80 middle school scholars from West Baltimore with their white coats on — walking proud and tall knowing they are special and their futures are bright — made the day even more amazing,” Saunders said. “We are all excited to begin a new year filled with inspiring opportunities and unique experiences for our scholars."