In his role as the University of Maryland, Baltimore’s (UMB) second President’s Distinguished Scholar, Luke Cooper, JD, MBA, has a multipronged vision that includes steering more of UMB’s procurement budget to minority-owned businesses in West Baltimore and giving local children hope that they could be those business owners of the future.

On the second point, Cooper stands as an inspiring example of someone who rose from disadvantaged youth to distinguished achiever, first as a mergers and acquisitions lawyer and now as an entrepreneur and venture capitalist. During a “Welcome to UMB” reception May 2 at Forno Restaurant & Wine Bar, he told a crowd of 40 guests about how a short plane ride at age 12 started him on that upward trajectory. 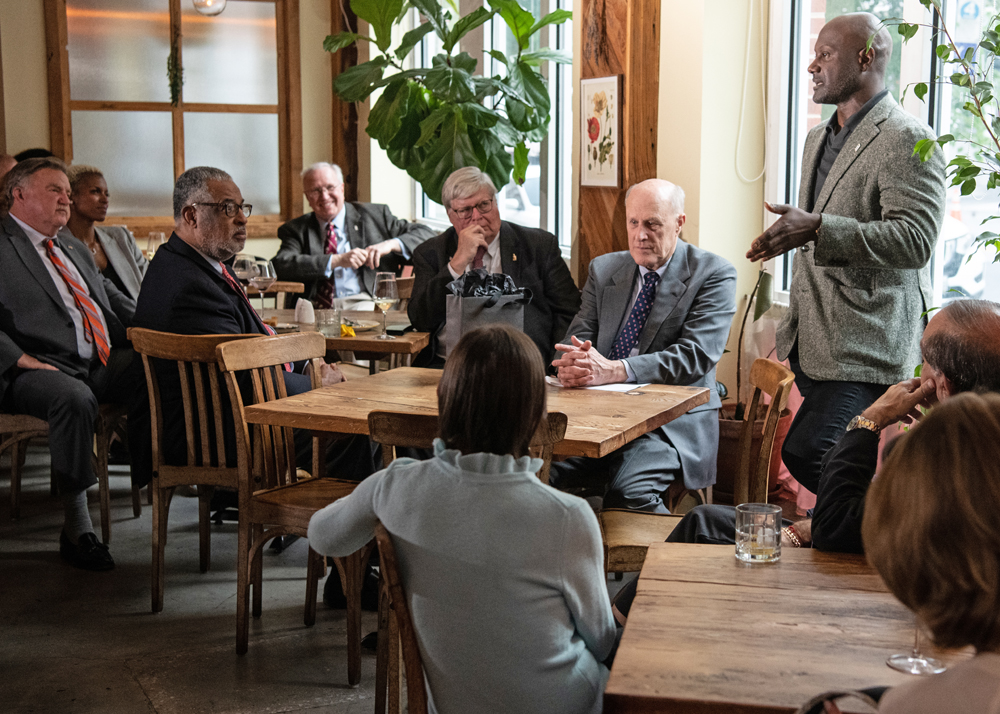 Luke Cooper speaks to UMB President Bruce Jarrell, vice president for research Gregory Ball, and others at a welcome reception May 2.

“I grew up in Bridgeport, Conn., which is a city about half the size of Baltimore but with about 150 percent of its problems,” said Cooper, who has lived in Baltimore for the past 20 years. “One Saturday morning, my mom said, ‘We’re going on a trip,’ and she took us over to Sikorsky Airport. We got in a tiny Cessna and flew over parts of Bridgeport. I could see the projects for the first time from that distance, and it created a distance in me, a distance from that reality.

“What it told me was that where I am is not who I am — that my life could take a different shape and a different direction than the one that I was given,” he added. “I hope through our efforts at UMB, we can demonstrate to the kids in West Baltimore that they can be so much more than their circumstance. And I think tech entrepreneurship is one of those paths for Black kids in this city.”

Cooper certainly knows all about tech entrepreneurship. In 2007, he sold his first company, CTS, a cybersecurity software firm, to defense contractor CACI. In 2020, he sold his company Fixt, an on-demand mobile device support and repair startup, to risk management company Assurant.

He is a partner at San Francisco-based Preface Ventures and the CEO of Latimer, a $250 million venture capital fund he founded in 2021 with the mission to elevate the experience of Black tech entrepreneurs; provide training curriculum and advisory services to founders who are Black, Indigenous, or People of Color; and facilitate strategic connections among investors, Fortune 1000 acquirers, and high-growth companies.

In February, UMB President Bruce E. Jarrell, MD, FACS, announced Cooper as UMB’s President’s Distinguished Scholar, succeeding Norman R. Augustine, MSE, the retired chair and CEO of Lockheed Martin Corp., who focused on topics such as crisis management, organizational effectiveness, and learning from success or failure. Jarrell saw Cooper, who was familiar with the University as a former member of the UMB Foundation (UMBF) Board of Trustees, as a perfect fit for the role of exploring how to leverage UMB’s financial assets with its community engagement efforts.

“I remember a UMBF board meeting awhile back, and Luke asked a question about our investment portfolio: How many Black-owned businesses were involved in the portfolio?” Jarrell said. “More importantly, he made the distinction between Black individuals working for a company versus a company that was owned by Black individuals.

“We have been talking for a long time about how to increase the amount of UMB involvement in small businesses and not-so-small businesses in West Baltimore. How do we figure out what obstacles are preventing us as an institution from doing more business with our neighbors? So the idea is to ask that question from the direction of an entrepreneur looking in, as opposed to an administrator looking out. This is what Luke will be doing as he focuses on wealth development in West Baltimore.”

On Cooper’s LinkedIn page, he says his UMB responsibilities include research, data analysis, speaking, and having dialogue with institutional leaders, students, and stakeholders to create economic empowerment throughout West Baltimore, leveraging technology and the University’s core values of equity and justice. His familiarity with UMB is a starting point, but he said he’s learning even more from conversations with University leaders.

“I want to first understand every aspect of the institution,” Cooper said. “I was fortunate to have been a UMBF trustee for the better part of two years, so that gave me a viewpoint, for sure. But it also gave me a bias, right? So I want to back away from that bias by talking to new people such as Dr. [Diane] Forbes Berthoud, the University’s new chief equity, diversity, and inclusion officer. I’ve talked to two of the school deans and the head of UMB’s Administration and Finance. And all of that has given me a greater perspective about UMB.

“On procurement, for example, there might be $45 million to $50 million in PCard [Corporate Purchase Card] usage that’s not tied to real economic development in Baltimore, because of the discretion of the PCard user,” he added. “And this is money that might miss the Black and brown people of our local communities. So I’m just working now to understand the people, the networks, and how the system works.”

Cooper also is approaching the President’s Distinguished Scholar role with his signature style, proudly proclaiming, “I’m a rabble-rouser. I tend to ruffle feathers and disrupt things wherever I go, because I want to make things better. I want to make the table that we are all sitting at a longer table, so that everybody can participate in the conversation that we’re having about UMB and its role in supporting economic empowerment in West Baltimore.”