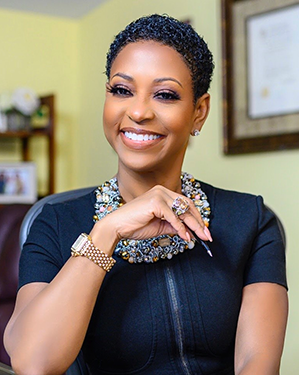 Gloria Mayfield Banks is a motivational success strategist who has consistently beaten the odds to achieve phenomenal success in her life and business. She overcame dyslexia, domestic violence, and a painful divorce to obtain a Master of Business Administration degree from Harvard University and become a top sales executive and a multimillionaire entrepreneur.

Banks began her professional career in the computer industry, first as a sales representative for IBM and later joining Stratus Computers as a manufacturing marketing manager. She went on to become assistant director of admissions at Harvard Business School, where she traveled nationally and internationally to recruit students.

In 1988, as a single mother of two faced with a difficult divorce, Banks began selling Mary Kay products to supplement her income. Within a year, she set company sales records, and within a few years, her business had grown to over $24 million in retail sales and a sales group of over 6,000 consultants. Her record-breaking ascent to elite executive national sales director, the highest sales position, was faster than anyone in the company’s 50-year history. Banks is one of only three women who currently hold this position in the United States.

Banks is best described as “energy in motion.” In addition to her position with Mary Kay, she is an internationally renowned motivational speaker and sales trainer, a communications consultant, and one of the founding partners of Charisma Factor, Inc., a corporate event planning company. Considered an expert in the fields of motivation, self-esteem, and sales training, Banks has trained people in China, Russia, Mexico, Canada, Germany, South Africa, United Kingdom, Australia, Kazakhstan, and Brazil. She often works with children, motivating them to get a jump-start in school and their personal lives. Banks is always on the go, traveling the country and speaking to hundreds of people at her special event workshops.

She presents her ideas and thoughts in a conversational style with confidence, yet her enthusiasm is contagious. One of her best-known workshops — “People-ality” — teaches the potency of people skills. Known for her high energy and inspirational teaching style, Banks presents her expertise in “What It Takes,” an online professional and personal development series for leaders and career professionals that provides expert insight and practical strategies to achieve greater success. Banks’ enthusiasm is contagious, and her message is strong: “Success is a choice that once committed to can be achieved!” A dynamic storyteller, Banks presents her ideas and thoughts in a conversational style and uses creative humor to impact her audience. She has demonstrated by example that through determination and hard work, any goal can be achieved.

Banks has shared her secrets of success with national media audiences, appearing on CNN with Soledad O’Brien, ABC-TV, and CNBC with Donny Deutsch on The Big Idea. She also has appeared in Fortune, Connect, Black Enterprise, Glamour, Working Woman, PINK, and Ebony magazines. Most recently, Banks was honored as an “Outstanding Leader in the Workplace” by the Baltimore-area YWCA. There is a Harvard Business School case study included in graduate-level textbooks and taught to many business students nationwide named “Gloria Hilliard Mayfield at Mary Kay Cosmetics.”

Banks is married to Ken Banks, who also is a business owner and self-made millionaire. He is the founder of Banks Contracting Company and Banks Development Group. He is no stranger to purposeful, visionary, and large-scale projects and has maintained his position as an award-winning industry leader in delivering mega-scale construction and development projects. As an active community leader, Banks has sat on many boards including the Johns Hopkins Bloomberg School of Public Health’s Health Advisory Board, the University of Maryland School of Medicine Board of Visitors, and the R Adams Cowley Shock Trauma Center Board of Visitors. The couple share four adult children and live in Maryland.

Back to Women's History Month 2022