YouthWorks at the University of Maryland, Baltimore is sponsored by the University and the Mayor’s Office of Employment Development (formally Hire One now called Private Sector Youth Works). The summer jobs program provides Baltimore students ages of 16 to 21 the opportunity to complete a five-week internship in various departments throughout the institution.

YouthWorks promotes exposure to careers and workplace culture while providing an educational experience that fosters personal responsibility. Our unique feature of pairing students and mentors one-on-one gives the student an enriched experience of working at a place of higher education.

The University of Maryland, Baltimore (UMB) has taken part in employing YouthWorks students for more than 28 years. UMB’s positions are subject to availability by department commitment across the institution. Past internships have been in the areas of administrative/clerical, public safety, Campus Life Services, the Writing Center, Human Resources, and others. Students will work in their respective departments Monday through Friday and will attend professional development seminars each Wednesday. Professional development seminar topics include but are not limited to the following:

YouthWorks gives teens and young adults in Baltimore real-world experiences that help develop essential skills such as proper dress and give exposure to career options and pathways, and the program prepares our future workforce for successful careers.

To learn more about the program:

We urge faculty and staff to identify opportunities with their departments where young people could gain job skills and a meaningful educational and mentoring experience. This program has been a win-win for the UMB and the program participants.

Departments that wish to have a summer youth worker should complete a job order form. 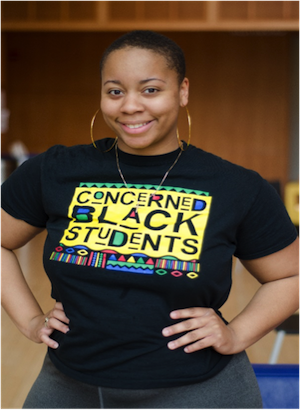 When looking for a job as a 14-year-old high school freshman, Alexandra Odom quickly realized that her options were few. Though she was eligible to work with a work permit, few employers were willing to hire someone so young. After learning about the YouthWorks program from her older sister, she was eager to apply. Her first position with the program took place the summer after her freshman year, in Chinquapin Park, where she contributed to a team of youth whose goal was to maintain and beautify the park.

Since her first YouthWorks position in the summer of 2009, Alexandra has spent six of the past seven summers in the program. With positions ranging from working in public parks to higher education, all of her YouthWorks positions have played a unique part in contributing to her goal to be a historian and professor of African-American history.

"The experience I gained as a YouthWorks student has been invaluable!" she says. "In my early years I was able to cultivate a strong work ethic and develop interpersonal skills necessary for success in a professional setting in a pretty low stakes environment."

As Odom transitioned to become a part of the HireOne sector of the program, she was able to use these skills in other positions that included working for local landscape architecture firm Mahan Rykiel and her current position at the University of Maryland, Baltimore.

This summer, as Alexandra prepares to begin her year as a Fullbright scholar and masters student at Queen Mary University of London, she is working as a writing consultant in the University's Writing Center.

"This job couldn't have come at a more perfect time," she says. "Not only am I able to be a peer tutor, which I LOVE, but my own writing is getting better, too."

As she ends her final summer in the program, Alexandra is proud to say that the YouthWorks program has been a huge contributor in her success as she continues on the journey to reaching her goals. 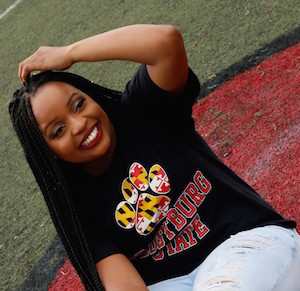 I am currently a graduating senior at Frostburg State University and I am from Baltimore.

I first heard about YouthWorks my freshmen year in high school. I began my first job in the summer of 2010 at a daycare center named God’s Little Angels. Beginning my sophomore year in college at Frostburg State University, I decided to reapply for YouthWorks since I was not able to find a job last summer and was not aware that there was a Hire One job readiness program that allowed students to be eligible for professional jobs.

I received a call from Ms. Camille Givens-Patterson and thus started my summer job at the University of Maryland, Baltimore PHSR and was blessed to receive a job that allowed me to work alongside Dr. Francoise Pradel in the Prescription Drug Monitoring Program. Being able to assist with this project actually made me want to get involved in research and look more into MD/PHD programs.

My mentor that summer was Dr. Nidhi Rawal, who is a physician in the gastrointestinal division at the University of Maryland Medical Center. That summer was a defining moment for me and pushed me closer to my aspirations of becoming a physician. The kindness that everyone showed me during my time at UMB made me want to attend school there and return next summer. My time at UMB wasn’t just a job to make money, but also somewhere I made meaningful connections.

Being a part of the PHSR faculty was a huge learning experience about myself. I learned the importance of being on time, professionalism, and the importance of asking questions. This May, I will be the first member of my family graduating with a BS degree in Health Science and graduating with honors. I also will be continuing my education in graduate school, which will prepare me for a MD/PHD program at medical school. I hope to choose a specialty that will coincide with my research career in the future.

YouthWorks: Building a Generation of Change-Makers in the news

September 23, 2020  |  UMB and UMMC team up to bring their annual summer YouthWorks Program to a virtual platform due to the COVID-19 pandemic.

YouthWorks Interns Get Simulation Education Primer in the news

July 24, 2019  |  This summer 78 students are participating in the Summer Bioscience Internship Program, one sector of the YouthWorks Program at UMB.

Perkins Makes Most of Last-Minute Chance

Jamesha Perkins nurses great hopes for the future, thanks to YouthWorks.

Once An HR Intern, Anderson Grows

Jana Anderson, an analyst in Human Resources, has come a long way since her YouthWorks days.

Help Along The Way

Kiana Harvey turns guest spot into a longtime role at the School of Pharmacy.