Eric Barksdale is a rising senior at Dunbar High School who can envision himself working in the health care field. A recent trip with fellow students in the University of Maryland, Baltimore’s (UMB) Summer Bioscience Internship Program (SBIP) put that vision into much clearer focus. 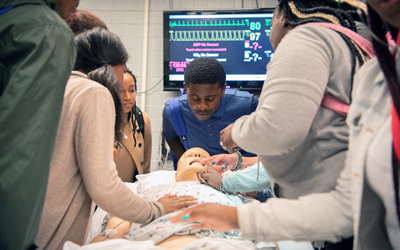 Eric Barksdale (center) and fellow SBIP interns examine Herman, a high-fidelity manikin, during the hands-on portion of their visit to the MASTRI Center.

Barksdale, who participates in Dunbar’s Pathways in Technology Early College High School (P-TECH) Program, was among the interns who visited the Maryland Advanced Simulation Training, Research and Innovation (MASTRI) Center at the University of Maryland Medical Center (UMMC) on July 8. The center is a collaboration between UMMC and the University of Maryland School of Medicine.

“This is a great experience,” Barksdale said after Part 2 of the visit, where he and the other students manipulated laparoscopic simulation machines that allow users to practice the type of hand-eye coordination skills needed to perform less-invasive surgical procedures. “Being able to do something hands-on is different from what we did the first three days of orientation, where we’re just watching and listening.

“Here, we could actually do it ourselves. Doing these simulations, it makes me want to do nursing. And treating a real patient in the future would be much more exciting.”

The hourlong visit was part of a four-day orientation for SBIP, a five-week paid internship program in which high school students 16 and older interested in health or research careers are placed with mentors in research labs around UMB or at sites such as UMMC and the R Adams Cowley Shock Trauma Center. Twenty-one students are participating in SBIP this summer.

SBIP is one prong of the YouthWorks Program at UMB, which is participating in the work-readiness initiative with the Mayor’s Office of Employment Development for the 29th year. This summer, 78 students are participating. The other sectors are the Community Engagement Center; private sector (administrative/office jobs); and the CURE Scholars Summer Program. The latter hosts students from UMB’s CURE initiative, which is supported by the National Cancer Institute’s Continuing Umbrella of Research Experiences (CURE) Program.

At the MASTRI Center, simulation educators Katie Gordon MSN, RN, CNE, and Kerry Murphy, DVM, took turns showing the interns how they train residents and health care practitioners to prepare for various medical emergencies and high-tech surgical procedures. Gordon led off the presentation by introducing Herman, a high-fidelity manikin used for training on such tasks as inserting a breathing tube, putting in a central IV line, and performing a lumbar puncture, where a needle is placed into the spine.

“In about 20 minutes, a bunch of doctors who just graduated from medical school are going to come here and learn how to intubate a patient,” Gordon said. “This is where they learn those type of skills. They’ll put the breathing tube into the patient, then put the bag and mask on. Then they’ll see if the lungs have expanded, and if so, they know they’ve done it correctly.

“That’s called task training. And all of these procedures will be happening here in simulation before they ever happen on anyone else. And it’s good to practice, right? That’s why we’re here.”

Gordon said Herman is but one of the MASTRI Center’s manikins, joining Sim Jr. (used for age 6-10 simulations), Noelle (a female giving birth), and two newborns, including a premature baby. She pointed out that Herman’s eyes blink, his pupils constrict and dilate, and he has a pulse and heart and lung sounds. The simulation educator, she says, can adjust these vital signs to fit certain medical scenarios as well as add fake blood and body fluids to the make-believe mix.

“Simulation is at the forefront of medical education,” Gordon said, pointing out that airplane pilots were pioneers in simulation training. “We have multidisciplinary simulations here every week. That means it’s not just nurses, it’s not just doctors — it’s two nurses and a physician, or an anesthesiologist, a respiratory therapist, and a pharmacist. All of them are coming to work around this patient, so that it’s the most realistic practice there could be.”

The SBIP students were allowed to poke, prod, and otherwise examine Herman, with some shining their cellphone lights into his eyes and others taking turns placing a stethoscope to hear his heartbeat.

“That was neat,” Barksdale said. “I love how responsive it is — it has all these different responses, like sweating, breathing, coughing. It was pretty cool to see that robot act like a human.”

Simone Wade, a rising senior at Dunbar who is interested in anesthesiology, said of Herman, “Checking his pulse, his eyes being dilated, that’s really interesting. Plus the simulation educators can be very creative, using stuff like fake blood just to make the situation more dramatic. So it’s all really cool.”

The tour moved to the adjacent room, where Murphy discussed the benefits of laparoscopic surgery — reduced hospital stays, quicker recovery time —and demonstrated how to use the simulation machine, which included left- and right-hand controllers. The interns were allowed to practice on the simulators, picking up a triangular block with one instrument’s claw, transferring it to the other instrument, and placing it on a peg.

“This is one of the very basic skills that surgery residents start to learn, and they practice how to use both hands,” Murphy said. “It also is going to help you stand upright and get in a good position where you’re balanced on both feet and your shoulders are back. If you are driving your whole body into it, that’s not very efficient and you can get injuries.”

Murphy also demonstrated a virtual reality machine that lets users practice the skills needed to remove a gallbladder, among other procedures, saying, “These are basically like high-tech video games on which you can practice your procedures.”

Malachi Bunch, another rising Dunbar senior, was impressed by both simulation exhibitions.

“The Herman presentation was fun, learning how it worked and how they control it,” he said. “The surgery simulators are a really good way to learn how to do something. Instead of just reading about it in a book, you are actually in there and doing something. That’s cool.”