Perkins Makes Most of Last-Minute Chance 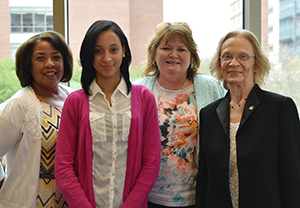 Jamesha Perkins thought she had missed out on getting a YouthWorks internship at UMB. She was a senior at Baltimore City College high school in 2011 and had filled out the application, but then there was silence.

It has proven to be a perfect fit. Perkins, who has aspirations to be a nurse, grew from that eight-week summer internship in the Department of Neurology to an “if/when” employee to, in May 2013, a permanent part-time office assistant in the department. She works Monday, Wednesday, and Friday and takes nursing classes at Baltimore City Community College (BCCC) on Tuesday and Thursday. Sometimes between semesters she works full time.

As an intern, Perkins began by doing general office duties — faxing, copying, filing, and running errands on campus. But says Dawn Flair, business operations specialist in the department, “within a short period of time, it was obvious that Jamesha was capable of so much more. Jamesha is extremely accurate with data entry and is great with Excel and PowerPoint. She quickly became part of our team and proved to be a very conscientious and valuable employee.”

Then 17, Perkins admits she had “good computer skills” from high school when she began her internship. Now her duties include assisting with Neurology’s volunteer program, tracking its faculty license renewals, handling follow-up for influenza vaccinations, and assisting with day two orientation, but she still remains a computer guru. “When something goes wrong with the laptop, they say ‘go ask Jamesha.’ I don’t know everything, but for the most part, I can help.”

UMB has participated for more than 25 years in YouthWorks, a hands-on, work readiness program coordinated by the Mayor’s Office of Employment. A lot of interns have come and gone. Camille Givens-Patterson, equal employment opportunity specialist in Human Resources, said it was quickly apparent that Perkins was a keeper.

“Jamesha was in the first group of young students I worked with through YouthWorks. Upon her initial interview, she came prepared with her resume and had a serious business handshake,” says Givens-Patterson, who has mentored Perkins along with Flair, Kathleen Slack, and others within the department. “I knew UMB was the right place for her. She had just graduated from high school and she was going to college. She is bright, professional, courteous, and knowledgeable. I know she is studying to be a nurse, but I told her she would make an excellent doctor!”

Perkins looks back on those YouthWorks days with fondness.

“I was fresh out of high school. I had never had a job before. But they didn’t treat me like I was a student worker, filling in,” says Perkins, who grew up in the Towson area. “They treated me like a new employee, introducing me around to everybody in the department. I felt like I fit in with the other professionals in the office. They did a great job helping me become familiar with each division within the department.”

She also liked the freedom she was given by her supervisor.

“Dawn is amazing,” Perkins says. “She’s been a boss. She’s been a friend. She’s been a confidant. She encourages me when I’m down. She teaches me all the ins and outs of human resources and payroll, but she isn’t standing over my shoulder. She trusts me to just get the job done.”

“I think that Jamesha is an inspiration to all young adults showing that hard work, determination, compassion, and education can help you reach all of your goals,” says Flair, who has been a YouthWorks mentor since 2010. “I have no doubt that Jamesha will make a wonderful nurse as she truly cares about people and wants to help them.”

First she has to finish her studies at BCCC (probably next year). Then she will start work as a nurse or go to nursing school. Or both. “If all my dreams come true, I will be a nurse at the University of Maryland Medical Center and [pursue a graduate degree] at the School of Nursing.”

Perkins’ younger brother, John, is working as a nursing assistant, a point of pride for her. “I feel like a mom when it comes to him, even though I’m turning 23 this year and he’s turning 20. Growing up, I’ve always been on his butt about school. He graduated, got his certification, and he’s working now at a retirement facility and doing so well. So I’m really happy about that.”

Perkins also is pleased with her own path. And if that last-minute YouthWorks opening hadn’t occurred? “Honestly, I probably wouldn’t be here because when they hire administrative assistants, they have some experience or a bachelor’s or associate’s degree,” Perkins says. “I really hope the YouthWorks program is endless. This was a great opportunity for me.”