Once An HR Intern, Anderson Grows 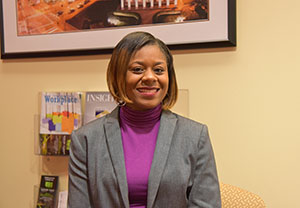 Being at the University of Maryland, Baltimore (UMB) has been a learning experience for Jana Anderson, an analyst in Human Resources. Not as a student, but as an employee.

Raised in West Baltimore, Anderson came to UMB as a high school sophomore at St. Frances Academy in 1998 as part of YouthWorks, a hands-on, work readiness program coordinated by the Mayor’s Office of Employment that UMB has participated in for 25 years. Aside from an eight-month span in 2014, Anderson has remained at UMB, collecting respect, accolades, and a profession along the way.

She was looking for spending money, not a career, when she arrived. “Two HR professionals from here came to my school and taught us how to write a resume and how to interview,” Anderson recalls. “I just remember how professional they were. It just seemed exciting to me.”

Plus there was the money, meager as it was. “I think we got $5 an hour,” Anderson says smiling. “I had never worked before. I was 16. I wanted to earn my own money, not just my dad’s allowance. Plus I was never interested in working at the mall or McDonalds.”

So young Jana came to UMB for eight weeks during the summer of 1998. She remembers her HR duties well. “Filing, filing, filing,” she says. “Back then, nothing was electronic. So we had a lot to file. I worked in the staffing department.”

She also made copies, answered the phone, and handled receptionist duties at the front desk, which she says was an education in itself. “You had all kinds of people coming off the street applying for jobs back then, they couldn’t do it online, and I had to learn how to deal with those different personalities. I learned how to remain calm, even though someone else may be upset.”

The teenager’s professionalism caught the eye of Juliet Dickerson, HR’s director of staffing and career services, who has been with the department since 1998. “Jana did everything you asked her to do, and then some,” Dickerson recalls. “She was pleasant, engaged, and mature beyond her years.”

So when Anderson’s 1998 stint ended, HR asked her back various times in 1999 and 2000. In May 2001 she became a part-time office clerk in HR while taking college classes and became a full-time employee in 2003. Why did she keep returning?

“It was the people,” says Anderson, who today ensures the accurate and timely processing of employee transactions as part of the HR Service Center. “I just remember working at HR and thinking they were the nicest people and I genuinely enjoyed working and learning various processes. I felt like they saw something in me and that’s why they asked me to come back. I’ve been a supervisor to several YouthWorks students so I know when they are excited about working and when they’re not. I was happy — no thrilled — to be here.”

And she learned a lot.

“I learned so much from the people here. How to dress in a professional setting. How to be professional and behave in certain ways. I picked up things from a lot of people here that they probably don’t even know that I picked up on, just being observant.”

People like Ronn Wade, her first YouthWorks mentor at the School of Medicine; the late Lois Reisig, her supervisor when Anderson moved to the School of Nursing in 2005 for nine years; Nursing’s Jenny Maddox; and HR colleagues like Dickerson, LaConya Hamilton, and Mary DiGiacinto, former staffing director.

“Mary ran a tight ship,” Anderson says. “She was very good on educating her whole team and even though I was 16, 17, 18, 19, 20 at the time, she would still give me the same professional articles she was giving her staff. That helped me stay abreast of what I needed to know to move up.”

Which she did before leaving UMB in April 2014 and returning to HR in December 2014. Now she vows “I will never leave again.”

Not that she is finished growing. Anderson earned her HR certification through the Society of Human Resource Management in 2012. She is now in her junior year at University of Maryland University College, pursuing a bachelor’s degree in HR management. Then she hopes to earn her MBA.

She has a 9-year-old son Brandon she raves about and she and her husband bought their first home in 2013, which is a good thing because Jana loves to host large family holiday celebrations. “This Christmas it was 15 to 20 people,” she says with a smile.

She is quick to credit UMB for her personal and professional success and her good fortune in coming as a YouthWorks intern in 1998.

So years from now, when Brandon is in high school, if he asks his mom for permission to join YouthWorks, what would Anderson say?

“I would highly recommend it for him. I definitely would,” she says. “It’s a great opportunity and it opens doors for you. The two months you’re working here, you’re learning so much!”

And sometimes the intern flourishes and gives back to the University as well.

“I think Jana is everything you hope for when you bring on a Youthworks student,” Dickerson says. “She didn’t just come to work. Even in high school she tried — and continues to — learn everything she could. Her success is very inspiring, because she works hard and cares deeply about UMB. As a result, her peers, supervisors, and colleagues are very fond of her and consider her an excellent team member. As a teenager and now as a young woman, I can’t ever remember hearing Jana tell someone she couldn’t do something.”

Anderson savors the compliments. “It’s just a blessing to be back here,” she says. “The culture here. The people. I’m very fortunate.” She now looks back and says “what started as a simple summer job has flourished into a career in HR for me.”