Help Along The Way 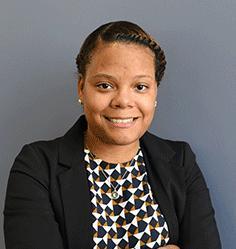 ‌Look out, high-ranking communications and IT people at UMB. Kiana Harvey aspires to take your job. And judging from what she’s done in the past eight years, don’t bet against the hard-working office clerk in the School of Pharmacy.

Harvey came to the Department of Pharmaceutical Health Services Research (PHSR) in 2007 as a 16-year-old high school student and has never left. After working three summers in the department through YouthWorks, a hands-on, work readiness program coordinated by the Mayor’s Office of Employment that the University of Maryland, Baltimore (UMB) has participated in for 25 years, Harvey was recruited to a contractual position with PHSR in 2012 after earning her associates degree at Baltimore City Community College in Liberty Heights.

Then she was hired as a full-time PHSR staff member in June 2014 after completing her bachelor’s degree in corporate communications at the University of Baltimore (UB). “They wouldn’t let me go,” Harvey says softly, flashing her ready smile. “They kept asking me back.”

That in itself qualifies as a success story, especially when you add in that Harvey is now “giving back” by mentoring other YouthWorks students and seeing her responsibilities steadily rise, handling travel expenses for the department, helping the school’s business office with data entry, and becoming “a software expert” as PHSR’s backup IT person.

But colleagues say there is another element to her story that makes it even more remarkable.

“Kiana has become a success in spite of her environment,” says Colleen Day, graduate program coordinator in PHSR. Adds Diane Kaufman, PHSR’s former administrative director, “Just the fact she graduated from college is a remarkable feat in itself.”

Harvey, who grew up in West Baltimore, showed her determination early, beginning to spend her summers on YouthWorks projects at the age of 14, assisting for two years at the Shiloh AME Church summer camp. She joined PHSR through YouthWorks for the next three summers, filing, making copies, distributing mail, reorganizing library materials — 37½ hours a week.

She said her early PHSR days in YouthWorks, her first ones working in an office, taught her essential skills she still uses today. “I learned how to be professional,” Harvey says. “I learned that you have to be on time. I also learned you have to take your work seriously.”

But wasn’t she tempted to spend summers like her high school friends, relaxing and maybe hanging out at the pool? “No. My summers were busy,” Harvey says in a serious tone. “When I graduated high school I started at Baltimore City Community College [BCCC] that summer. I was taking two courses. I would go to class and then I would come here to work.” 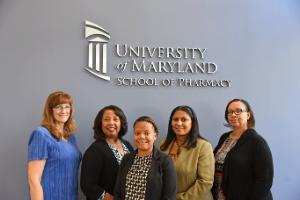 She augmented the small YouthWorks stipend by working at Starbucks at night. She kept her grades up and qualified for the Granville T. Woods Scholars Program at BCCC and for delegate and senatorial scholarships at UB to pay her college expenses. All the while on her path to becoming a self-sufficient independent person, she worked at the School of Pharmacy.

Why did she keep returning? “What I liked most about it was the department,” Harvey says with a smile. “That’s what kept me coming back. It was a pleasant environment. I enjoy working with the faculty, staff, and students.”

She leaned on mentors like HR’s Camille Givens-Patterson and Sheila Blackshear, and PHSR’s Kaufman, Day, and Karen Morales, her current supervisor and a supporter since 2007, who calls Harvey “a great ambassador for the YouthWorks program. We anticipated Kiana’s return every summer because we knew she would help us get caught up on our work assignments and she would do it with enthusiasm and accuracy.”

So when Harvey sought a communications internship to add to her resume, Day pointed her to the School of Pharmacy’s communications office. Harvey interned there in the spring of 2013, helping with Capsule, their alumni publication, and other duties.

“It was impressive how capably Kiana managed school, her work with PHSR, and her internship in our office,” says Becky Ceraul, assistant dean for communications and marketing at the school. “As our first intern, she was enthusiastic, engaged, and interested in each assignment we gave her.”

Now Harvey is in her third year of employment, but she is far from content. She aspires to get her master’s in information technology and a position in IT or communications. She also hopes to return to China after studying there for one month while at BCCC. She’s no longer the unpolished girl who came to UMB as a 16-year-old.

“Kiana has grown up before our eyes,” Kaufman says. “She has come so far. She is a trusted productive member of our department. She expands her duties as needs arise, learns new tasks quickly, and works with our faculty, students, and staff extremely well. I am extremely proud of her.”

When Kaufman’s words are read to her, Harvey beams in appreciation. She sees her success matter-of-factly. “I just felt education was my way out,” says Harvey, the first college graduate in her family. And she recalls the words of her teacher at Edmondson-Westside High School, who summed up Harvey’s story perfectly. “He once told me, ‘It’s not how you start the race, but how you finish.’ I’ve always kept that in my mind as inspiration.”