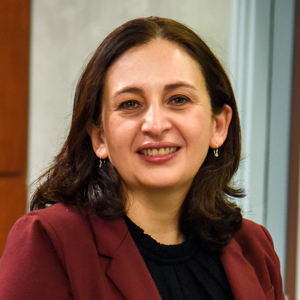 Patty Alvarez, PhD, serves as the assistant vice president of student affairs at the University of Maryland, Baltimore.

She has more than 20 years of professional experience working in student affairs and academic affairs at several universities, including the University of Dayton; Indiana University-Purdue University Indianapolis (IUPUI); the University of Maryland, College Park; and Cornell University. As associate dean of students and executive director of the Office of Multicultural Affairs at the University of Dayton (UD), Dr. Alvarez led diversity strategic planning efforts for the Division of Student Development, supported the academic success of racially and ethnically underrepresented students, developed intercultural education experiences for the campus, played a leadership role in developing and supporting a comprehensive student life component for the UD China Institute, and provided student support and crisis response to the campus community as a part of the Dean of Students Office. She also served as an adjunct faculty member in the Department of Counselor Education, where she taught multiple courses for graduate students enrolled in the higher education and college student personnel programs. In November 2017, she was recognized by the Southwestern Ohio Council for Higher Education with a Diversity and Inclusion Award.

Dr. Alvarez has used an inclusive excellence lens and approach to her work throughout her career. At IUPUI, she led a comprehensive student activities office that included student organizations, civic engagement, multicultural student engagement, fraternity and sorority life, campus programming, first-year programs, and student government. She also served as a coordinator in the office at IUPUI that she later went on to direct, Campus and Community Life, where she was responsible for cultural heritage month programming, a diversity and leadership program series, the Student Activities Programming Board, and campus-wide diversity education initiatives. At the University of Maryland, College Park, she taught undergraduate students enrolled in a living-learning community how to conduct research using community-based approaches. Dr. Alvarez served as the director of the Latino Living Center, a residential program house at Cornell. At Cornell, she also served as the residence hall director for the Pre-freshman Summer Program, a bridge program offered in collaboration with academic units for underrepresented students. Earlier in her career, she worked with Alaska Native youth through a position at the University of Alaska, Anchorage.

Dr. Alvarez earned a PhD in college student personnel from the University of Maryland in 2011.  She has a master’s degree in higher education and student affairs and a bachelor’s degree in criminal justice with minors in sociology and Spanish; both degrees were earned at Indiana University in Bloomington. She has served on the Diversity Advisory Council since September 2018.