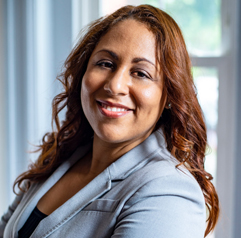 Rambob received her Doctor of Dental Surgery degree from the State University of Feira de Santana, Brazil in 1997. She then worked in private practice as a general dentist from 1997 to 2002. She completed a one-year program in advanced education in comprehensive dentistry at New York University College of Dentistry in 2007. She then pursued and completed a one-year residency program in advanced education in general dentistry at Howard University College of Dentistry in 2008. She completed training on mediation in 2017.

Rambob was the dental director at National Minority AIDS Education and Training Center from 2009-2010 and was the dental director at Health Care for the Homeless Maryland from 2010-2011. She has been a faculty member at the University of Maryland School of Dentistry (UMSOD) since 2009 and teaches behavioral sciences to second-year dental students. She was the UMSOD co-director for interprofessional education (IPE) initiatives from 2016-2018 and has been involved in several Universitywide IPE activities since 2014. She also has served in numerous committees across campus and is a member of the UMBrella Advisory Board, Diversity Advisory Council, and Faculty Senate.