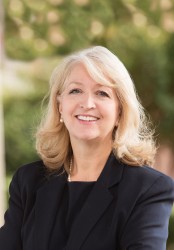 Monopoli is the Sol & Carlyn Hubert Professor of Law at the University of Maryland Carey School of Law, where she founded the Women, Leadership & Equality Program in 2003.

Monopoli received her BA, cum laude, from Yale College in 1980, and a JD from the University of Virginia School of Law in 1983. She teaches property, trusts, and estates and a seminar in gender in the legal profession. Monopoli has published three books and numerous articles in the Yale Law Journal, the University of Michigan Journal of Law Reform, and the Georgetown Journal of Gender and Law, among others. She is an elected member of the American Law Institute and an academic fellow of the American College of Trust and Estate Counsel. Monopoli has twice been selected as the Outstanding Professor of the Year at the School of Law and was named the University Teacher of the Year at the University of Maryland, Baltimore in 2013.