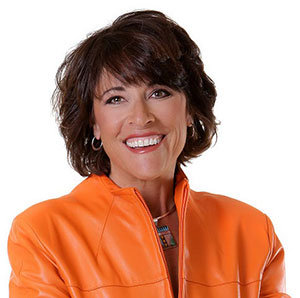 A four-time Pulitzer Prize-nominated investigative journailist, Germer has interviewed more than 300 of the most accomplished leaders of our time.

Put on your shoes. That’s the first step in building a satisfying life in which you reach your potential, Fawn Germer told a crowd at UMB on April 21.

‌Fawn Germer is an author, speaker, and business consultant. An expert on change and viability, Germer shows us how to turn the stress of a change-driven world into an opportunity to innovate and transform.

Germer is the best-selling author of eight books, including her newest, Reset, which will be published this spring. Reset shows us how to reboot our work-life balance to live a more meaningful, productive life without regrets.

More than anything, Germer is honest and real — so real that her audiences quickly connect with her as if she were speaking personally to each individual. She is an animated storyteller who uses compelling and entertaining stories to make the takeaway points that no one forgets.

A boss once told Germer that she’d never be more than she was at the time — a reporter — and she sure showed him. She is a four-time Pulitzer Prize-nominated investigative journalist and the author of eight books, including the Oprah Winfrey pick, Hard Won Wisdom.

Germer has interviewed more than 300 of the most accomplished leaders of our times, including Olympic athletes, CEOs, prime ministers, presidents, Academy Award winners, and many other trailblazers who shared with her the secrets of true success.

From them, she learned that success is born in risk and power comes from the self-awareness that disables our doubt and self-esteem issues.

Her first book was rejected by every major publisher in the United States, but Germer persevered until it was a bestseller. She wrote 29 letters to Oprah, and something broke through, with Oprah holding up Hard Won Wisdom and telling the world how “very inspiring” Germer’s work is.

Germer travels the globe with her message of viability, performance, and power. In recent months, she has given keynote speeches for Harvard, Cisco, Pfizer, Deloitte, Kraft, Coca-Cola, Kimberly Clark, Xerox, Bayer, AIG, PepsiCo, the NCAA, Marathon Petroleum, Hallmark, the Network of Executive Women, the UCLA Anderson School of Business, the Wharton School of Business, and many others.