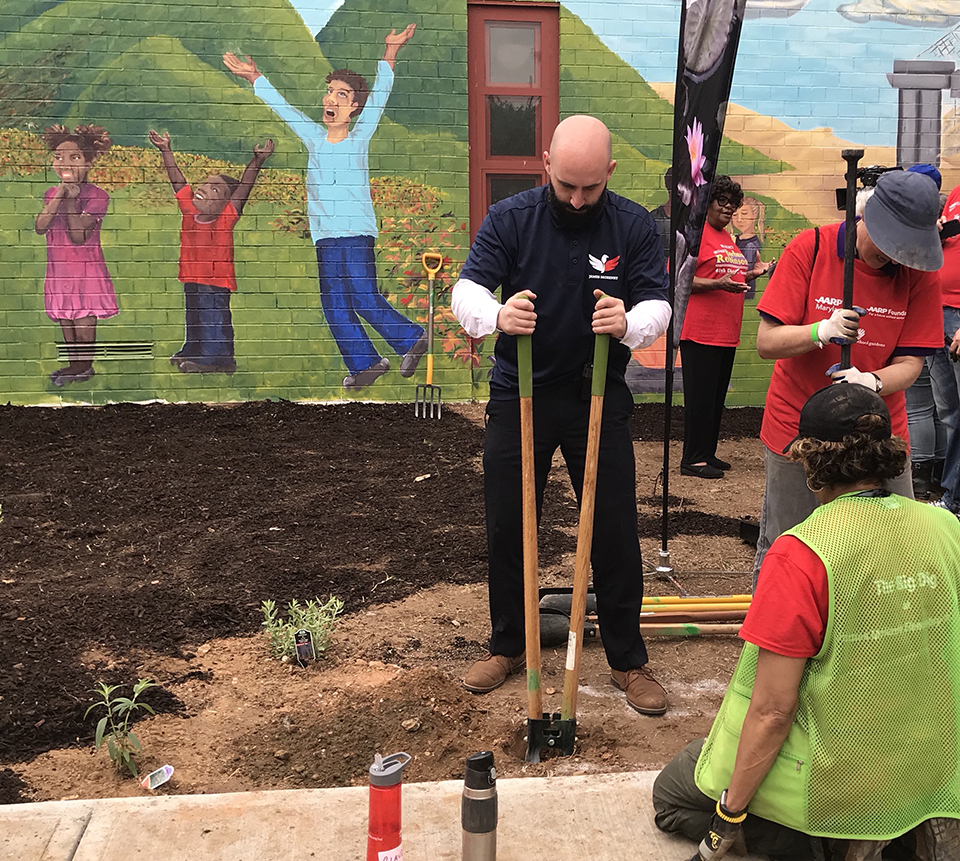 Last fall, fourth-grade students at James McHenry Elementary/Middle School helped local artist Candace Brush put the finishing touches on a hand-painted mural outside of their school. Upon its completion, principal Chris Turk said the mural reflects the spirit of the school and captures its power of positivity and optimism. Thanks to AARP Maryland and the nonprofit REAL School Gardens, those students now have an intergenerational outdoor community space next to that mural for the whole neighborhood to enjoy.

At the opening ceremony for the new outdoor space on May 10, in an event called the “Big Dig,” volunteers, including those from UMB’s Office of Community Engagement, completed the project and joined in the celebration. The mural project and the creation of the outdoor space illustrate how art can be integrated into community spaces in ways not previously imagined.

The mural at James McHenry was the second in a series of public murals planned in partnership with several area K-12 schools. The mural project was made possible by the University of Maryland, Baltimore’s (UMB) Council for the Arts & Culture, which sponsored the artwork, and Maryland First Lady Yumi Hogan, the council’s honorary chair.

The murals are designed and customized for each school by Brush, with input from students, parents, teachers, and administrators. On the day of the unveiling, a portion of the mural is left to be colored in by children from each school. The first mural project was held in 2016 at Southwest Baltimore Charter School, one of three West Baltimore schools that sends middle school students into UMB’s CURE Scholars Program. The Council for the Arts & Culture is working toward identifying the next location for the mural project, planned for fall 2018.

Nearly 100 volunteers of all ages and backgrounds participated in the “Big Dig” to construct the intergenerational community space at James McHenry. The result was an integrated neighborhood effort that will be enjoyed by many for years to come.