Fourth-graders at West Baltimore’s James McHenry Elementary/Middle School didn’t seem to notice the chill in the air when they put the finishing touches on a large mural outside of their school with the help of artist Candace Brush on Nov. 14.

The mural was sponsored by the University of Maryland, Baltimore’s (UMB) Council for the Arts & Culture, which works to enhance the quality of life at the University and in the larger community by promoting the use of public spaces for the visual and performing arts and to raise awareness of the links between the arts and the sciences. This is the second school to receive a mural. In November 2016, students at Southwest Baltimore Charter School helped Maryland first lady Yumi Hogan, who is honorary chair of UMB’s Council for the Arts & Culture, put the finishing touches on their mural. (Click for image gallery) 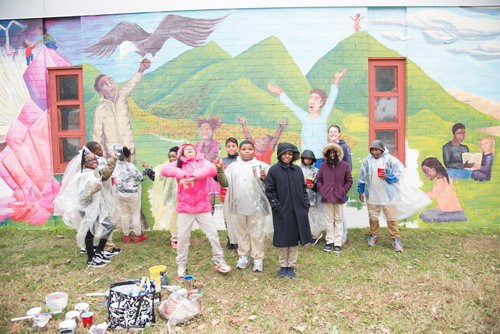 Fourth-graders from James McHenry Elementary/Middle School help paint a mural on their school thanks to UMB's Council for the Arts & Culture, which sponsored the artwork.

James McHenry Elementary/Middle was chosen for the mural because of its partnership with UMB and because it has recently been designated as a “turnaround school,” said Brian Sturdivant, MSW, executive director for strategic initiatives and community engagement for UMB’s Office of Community Engagement. The school has a new principal, many new teachers, and has received funding to make a difference in the school’s test scores, attendance, and outcomes.

Brush, who also helped with the Southwest Baltimore Charter mural, came up with three potential mural designs after learning a bit about James McHenry Elementary/Middle, she said. Teachers, parents, and students were given the opportunity to vote on the designs, according to Tina Moxley, president of the school’s parent teacher organization. The one selected was definitely the best, and she loved watching it come to life over the past few weeks, she said.

Several scenes are depicted in the mural; children reaching toward the earth, a rocket getting ready to launch, children playing in the grass watching a man set an eagle free, and a math classroom with equations on the board and the school’s “five promises” clearly visible – commitment to quality, honor and integrity, perseverance, no excuses, and contribution.

“When you look at this mural, it’s inspiring and it’s positive,” said Chris Turk, the school's principal. “This mural just captures the panorama of what you would want a whole child learning experience to look like.”

Brush began painting the mural in early October, and the children helped fill in the grass and floor tiles of the classroom at the Nov. 14 event.

“They are doing a great job,” she said of the students, some of whom also managed to paint themselves.

“Our school, at first, wasn’t this beautiful, so I’m trying to work with the school to see if we can make [it] a better place for children,” he said.

Meanwhile, Kylie Adkins, also in fourth grade, decided that it was more fun using her hands to paint the grass than a brush. Her favorite part of the mural was the little girl in the grass because they look like twins with very similar “puff balls” in their hair, she said.

Sturdivant, who helped facilitate the mural process and organize the kids, was pleased with the outcome.

“It is a great way to symbolize a new beginning for the school considering its new designation as a turnaround school,” he said. “I love how it incorporates the five promises.”