In a feast for the senses, the University of Maryland, Baltimore (UMB) held its fourth annual Neighborhood Spring Festival to encourage people to connect with their neighbors in West Baltimore. More than 300 attendees from the Poppleton community and beyond gathered beneath a huge tent on the lawn near the UMB Community Engagement Center (CEC) to enjoy the arrival of spring.

“It was a fabulous display of our community and University partnership,” said Ashley Valis, MSW, executive director of strategic initiatives and community engagement at UMB. “We had generations of residents dancing, singing, laughing, and meeting new friends. And that’s what it’s all about.” 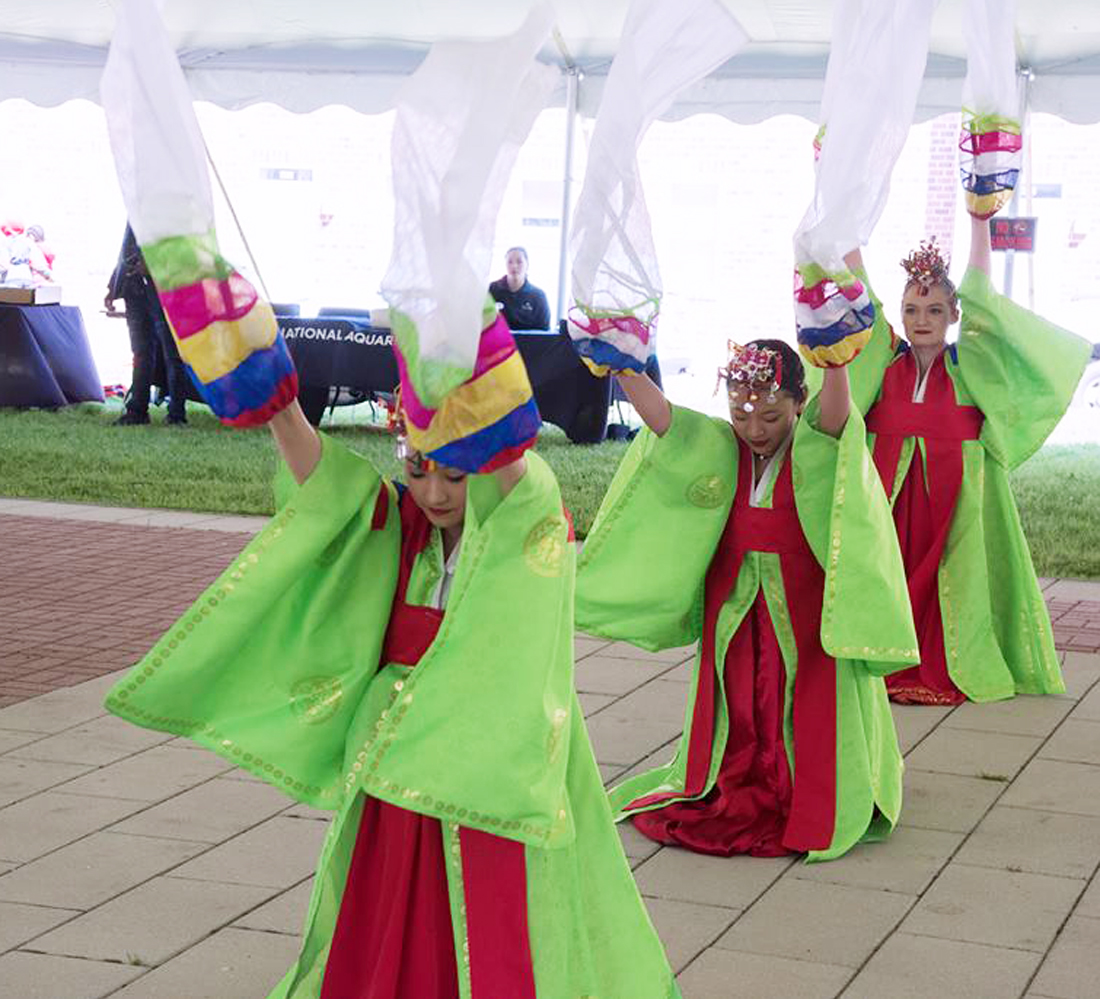 UMB President Jay A. Perman, MD, welcomed both newcomers and those who regularly participate in CEC activities, urging everyone to have fun and take advantage of public health aspects of the April 27 event.

The president’s co-host was Maryland First Lady Yumi Hogan, who is honorary chair of the UMB Council for the Arts & Culture. In what has become a tradition, she was joined by guests celebrating their Korean heritage. The first musical performance of the day was the Flower Crown Dance by the Hee Kyung Lee Korean Traditional Dance Team. Later, the group performed the Sword Dance. The Han Pan Korean American Cultural Center presented Samulnori percussion.

The entertainment was cross-cultural, with marching band appearances by La Banda del Pulgarcito and the Baltimore Christian Warriors. Line dancing by Spirit Feet prompted many in the crowd to put down their plates or finish off their ice cream cones so they could join in the fun.

On several occasions, applause swelled. One highlight was during the taekwondo demonstration by the Cadet Martial Arts & Fitness, when youngsters flipped into the air and snapped boards with their feet. Another was during the Samulnori percussion piece, when performers handed off their spinning plates to none other than Hogan and Perman, who were strategically seated nearby.

(View a video below and see a photo gallery on Facebook.)

Curtis Eaddy II, events and marketing manager of the Southwest Partnership, served as emcee. “It’s not just a spring fest,” he told the crowd, “but it’s a healthy spring fest.” He urged attendees to take advantage of resources such as vision and blood pressure screenings.

Inside the CEC, the Student Sight Savers Program of the University of Maryland School of Medicine (UMSOM) offered eye tests to children and adults. At a table under the tent, UMB students who belong to the interprofessional Health Alliance offered information. Ryan Dunlow, a second-year UMSOM student, and Trish Hays, a second-year student in UMSOM’s Department of Physical Therapy and Rehabilitation Science, said their fitness journals and first-aid kits were popular giveaways.

At the curb on Baltimore Street, the “UMMC on the Move” mobile health van welcomed festival-goers, checking vital signs and providing health facts such as the revised levels for a normal blood pressure. Community health worker Griselda Funn, based at the University of Maryland Medical Center Midtown Campus, is a member of the van’s team that makes routine stops at the CEC.

Speaking of arrivals to the van, she said: “It’s the first time for a few, but others are regulars.” As for Funn, this festival was a repeat. “This is my third time being here,” she said. “It’s really well-attended, and the performers are amazing. The resources for the community are things they really needed.”

Eaddy said residents of Southwest Partnership communities tell him how much they appreciate the combination of resources, food, fun, and entertainment at the annual event. “The UMB Spring Festival bridges the University’s campus and our neighborhood campus and provides multicultural experiences,” he said.

Having been raised in Poppleton, Eaddy said the opportunity to emcee such a vibrant event was a special honor. And it was no small feat given the many features that deserved attendees’ attention: free produce, vendors selling jewelry and other crafts, representatives of the Port Discovery Children’s Museum and the National Aquarium, face-painting, pony rides for children, and cavorting mascots. The UMB Police Department’s McGruff the Crime Dog, the Baltimore Ravens’ Poe, the Oriole Bird, and Splash, a Chesapeake Bay retriever wearing a life vest, all appeared. The latter promotes water safety for the Maryland Department of Natural Resources.

The Governor’s Office of Community Initiatives was among supporters of the festival.

During part of the day, sixth- through ninth-graders in the UMB CURE Scholars Program were able to participate. Copies of their research posters were on display, and several scholars and their mentors answered questions about health disparities. Later, a large group of scholars joined in the activities after competing in a STEM (Science, Technology, Engineering and Math) Expo at the University of Maryland BioPark.

For children at the festival, pony rides were a big draw. “The horse caught his eye,” Rodney Timpson said of his son, Solomon, 6. And what did the young rider think of his trip? “Kinda bumpy,” he replied.