Believing the country is facing a leadership vacuum, University of Maryland, Baltimore (UMB) President Jay A. Perman, MD, did his best to fill the void with his fourth annual State of the University Address on May 10.

“I chose the theme ‘How We Lead’ because I think we’ve seen a deficit of leadership in some quarters,” Perman said before a crowd of roughly 300 people in the School of Nursing Auditorium. “In this vacuum, people crave what they’re too often missing: ethical, enlightened, courageous, and compassionate leadership. I believe that’s exactly the kind of leadership UMB provides.” 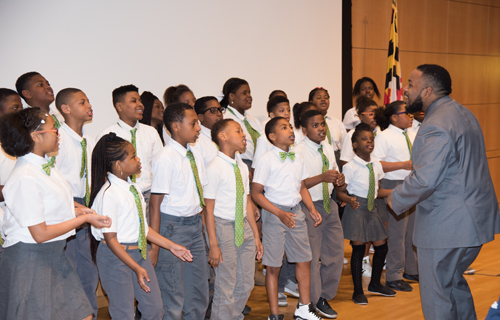 Students from Green Street Academy perform prior to the State of the University Address given by University of Maryland, Baltimore President Jay A. Perman, MD.

In some instances, Perman said, leadership requires adjusting to the times. Eighty-five percent of America’s college-going population is between 25 and 64 years old, many with full-time jobs. So UMB is beginning to offer more flexible courses, led by its Graduate School. Perman cited the Carey School of Law's online Master of Science in Law for professionals working in cybersecurity and homeland security. “Nursing, Pharmacy, and Social Work are engaging instructional designers to build highly accessible online courses," said Perman. "When I returned to UMB in 2010, not one of our students was enrolled in a program delivered entirely online. By 2020, we’ll have about 420 of these students.”

In addition to flexibility, today’s college students want to be meaningfully engaged in innovation and entrepreneurship. The brand new Student Innovation Center and a third cohort of Entrepreneurial Fellows, who work for a whole year on commercializing a faculty invention, will soon benefit from a renovated Lion Bros. Building in the University of Maryland BioPark, which will be home to UMB’s Center for Maryland Advanced Ventures, established last year through the University of Maryland Strategic Partnership with College Park.

Three startups, one headed by UMB PhD students Camilo Vanegas and Elizabeth Weingartner, already have taken up residence in the building. A proposed master's program in social entrepreneurship also will reside in the building. The program will engage students in applying design thinking and business principles to pernicious social problems, like city food deserts that contribute to grave health disparities.

“But this Lion Bros. Building isn’t only about university startups,” Perman said. “It’s about community, too. Our tenant mix in the building reflects our true intent: to enrich neighborhoods, not to displace neighbors. One of our tenants, Enterprise Homes, has helped create 14,000 affordable homes in Baltimore City. Another, Baltimore Community Lending, provides affordable housing loans in underserved city neighborhoods.”

Perman returned to the community theme often during his address, which began with a song by the Green Street Academy Sixth-Grade Chorus. The chorus includes nine members of the UMB CURE Scholars Program, a pipeline initiative that prepares West Baltimore middle school children for health care and research careers through hands-on workshops and mentorship.

“In addition to educating their children, what our neighbors want for themselves is simple: Jobs,” said Perman, who the week before joined University of Maryland Medical Center president and CEO Mohan Suntha, MD, MBA, for a community town hall at Carter Memorial Church of God In Christ.

UMB’s Community Engagement Center (CEC) is trying to help, guaranteeing that anyone from the local community who works with the CEC and is qualified for a UMB job will at least get an interview. Perman said UMB must figure out how to prioritize local hiring, when almost all of the University's jobs require a high school diploma, when almost all require computer skills, and when a surfeit of applications for each job means that any deficiencies in skills or experience can disadvantage some local job seekers.

“Fun activities,” like line dancing, Zumba, and community lunches, have proved especially popular at the CEC, which has logged more than 10,000 visits since it opened in 2015. “Building a community that feels safer, more connected, and more understood is important,” Perman said. “Is it hard to measure the efficacy of this kind of programming? Yes. But is it hard to feel the benefit? Not even a little bit.”

Baltimore isn’t the only place in Maryland where UMB is making an impact. Perman spoke of how UMB is expanding care in Prince George's County, through a grant that supports team-based care for those most at risk of being admitted or readmitted to the local hospital. He cited the School of Dentistry, which is replicating a partnership model with health care providers across the state to expand care to vulnerable populations.

“Our value — UMB’s value — is in our people and in the exceptional care they offer,” Perman said. “So if we can partner with functioning health care providers who can keep their buildings maintained, we’ll be there with our people to make sure patients get the high-quality care they deserve.”

Another team approach Perman mentioned was joining Johns Hopkins University in its application for a Clinical and Translational Science Award (CTSA) from the National Institutes of Health (NIH). CTSA awards focus on translating laboratory science into the drugs, devices, and treatments that extend and enrich people’s lives.

“UMB enriches this project through our people and resources, through our collection of schools — in health sciences, social work, and law — that Hopkins wants as collaborators because bringing our multidisciplinary expertise to bear increases the application’s competitiveness. It’s time that Baltimore’s two most powerful research institutions forge an alliance around science,” Perman said.

Any discussion of research must include dollars and Perman didn’t shy away from the topic. UMB has seen its research enterprise grow, with 2017 awards to-date 20 percent higher than they were at this time last year. Moving to UMB's budget overall, Perman assured the audience that the fiscal state of the University is strong. He talked about investing in special school-based projects that advance UMB's strategic priorities, in deferred maintenance for aging buildings, and in strengthing the Office of Philanthropy. Making tuition more affordable is essential, he said.

Perman thanked UMB’s faculty, staff, and students for their involvement in advocacy. During the legislative session, the University’s people testified for and against dozens of bills before the General Assembly and, in UMB’s first-ever Interprofessional Education Day in Annapolis, more than 20 students shared with lawmakers how IPE makes them better practitioners and why students across the University System need more opportunities to learn interprofessionally.

The General Assembly provided nearly $6 million in UMB's 2018 budget to help cover the Year 1 operating costs for Health Sciences Facility III, which is due to open in January. “The building adds 136,000 square feet for wet and dry labs and core facilities, and at full occupancy, it should generate more than $100 million in research revenues and stimulate $212 million in economic activity in Maryland,” Perman said.

Additionally, last month, UMB gathered together a group of research deans and vice presidents from College Park, Johns Hopkins, UMBC, and Morgan State. For the first time, this group went to D.C. together to lobby Maryland’s congressional delegation. Perman said he was “encouraged” by the 2017 spending bill passed by Congress last week that greenlights a $2 billion increase for NIH and a 5 percent increase in the federal research and development budget overall.

But Perman acknowledged that the University needs additional support. “We’re not likely to see a spike in state or federal money. The one elastic, accessible, cost-effective form of revenue-building is philanthropy,” he said, mentioning that UMB Chief Philanthropy Officer Tom Sullivan would be leading “a major, multi-hundred-million-dollar campaign” beginning this fall.

Perman said UMB's future will be driven by “big ideas.” In 2014, deans at UMB and at College Park came together to propose areas in which both universities could collaborate. Those proposals have since come to life as the Center for Sports Medicine, Health, and Human Performance and the SAFE Center for Human Trafficking Survivors. That "big ideas" exercise was repeated this year, with the deans generating proposals in neurodegenerative research, opioid abuse, effective policing practices, cybersecurity in health informatics, infectious disease detection and prevention, and many more.

Perman closed his address by saying, “I’m privileged every day to hear from the people of this city and state — from those in positions of great power to those in positions of great need — and they tell me that UMB is making change, that UMB is doing good, that UMB is leading in the ways that matter.” He added, “I regret only that you don’t hear those words as often as I do. But I am again this year privileged to tell the story of your work — of your leadership. And for that privilege, I thank you.”