Redevelopment of the historic Lion Brothers Building near the University of Maryland BioPark is a powerful sign of continuing revitalization in West Baltimore. The former factory at South Poppleton and Hollins streets is set to reopen in December, and already has lined up tenants for two-thirds of its 37,500 square feet of space.

At a ribbon-cutting ceremony on Aug. 17, University of Maryland, Baltimore (UMB) President Jay A. Perman, MD, thanked James L. Hughes, MBA, UMB's chief enterprise and economic development officer and president of the corporation that operates the BioPark, for his leadership in creating “a thriving innovation district.” Perman added that the University has been focusing on extending the benefits of the BioPark out into the community, to help create more jobs, opportunity, and vitality in West Baltimore. 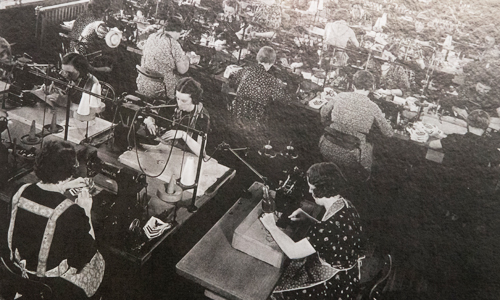 Established in 1899, the Lion Brothers Company originally manufactured a wide range of products including blouses, skirts, and sailor caps but later specialized to only make embroidered emblems.

Initially, tenants will include:

The University of Maryland, Baltimore County. UMBC’s Intermedia and Digital Arts graduate (MFA) program is currently at 1100 Wicomico St., but is looking for space that’s more connected to the community.

The total cost of the renovation will be $11.7 million. Some of the funding includes historic tax credits and a state grant. For more information, see this story in The Baltimore Sun.