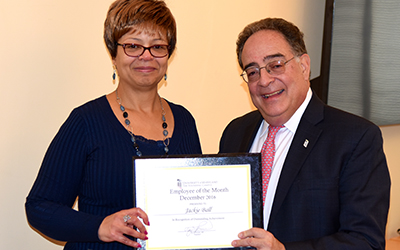 Jackie Ball, Human Resource Services (HRS) Center supervisor, was in a staff meeting with 30 HRS colleagues on Dec. 14. But her thoughts were elsewhere. She was focused on the new hires she had to process, and the pay and position changes that awaited her after the meeting.

Then an unannounced visitor entered the conference room: UMB President Jay A. Perman, MD. And when he told the group he was there to name Ball as UMB’s December Employee of the Month, she was completely caught off guard, and shed a few tears.

"Leave it to me to spoil the party," said Perman, touched by her reaction.

Ball, who has worked at UMB for almost 14 years, all in HR, has managed the HR Service Center since January 2008 and is a key partner with the Payroll Office and Center for Information Technology Services (CITS) to ensure employees are paid timely and accurately. During her tenure, she has had a lead role in some of HRS's largest projects, including the recent Fair Labor Standards Act (FLSA) reclassification.

"When we look for an Employee of the Month, we always ask to what extent that person represents the core values of the University," Perman said. "What was especially noteworthy about you, Jackie, was your collaborative nature. People say you’re always open to new ideas, you enjoy interacting with clients. Something else I noticed: I’m told you’re one of our University experts on hiring international employees, addressing their concerns, making them feel welcome. So for all those things, congratulations on your award!"

Ball, her composure restored, thanked the group. "I’m at a loss for words. I’m sitting there thinking I have all this work to do and now this, thank you! And it wasn’t just me. It’s not just what I do. I go to Ayanna [Thompson], Patti [Hoffman], Emily [Runser], Dave [Kloc], and Michelle [Graham] — it’s everybody. It’s everybody who helps me do my job and I’m hoping I’m helping you as well."

Matt Lasecki, SPHR, associate vice president for HRS, added: "Jackie, you do your job with humility and you do it with excellence. You really embody what we’re trying to do in Human Resources and the recognition is very well-deserved."

A few days after the ceremony, Ball still couldn’t believe it.

"We were processing the last payroll cycle for the year and I was still backed up from FLSA so I went to Juliet [Dickerson, HRS director of staffing and career services] and said ‘Can I not go to this?’ She said, 'No, Matt wants everybody there.' And when Dr. Perman walked in, I thought, 'Oh my. What is going on?'"

The FLSA work was particularly grueling. Ball worked on the federal reclassification for six weeks to meet the Nov. 27 implementation date. Then on Wednesday, Nov. 23, when many employees were home preparing their Thanksgiving feasts, HRS learned all FLSA actions across the state were being halted due to a federal injunction. Ball, the HRS leadership team, and their counterparts in CITS conducted conference calls from home to determine how best to undo the actions. Starting on the Monday after Thanksgiving, Ball began undoing all of the work. Some 600 records were touched and retouched, with 100 percent accuracy.

"Excited" to be Employee of the Month, and grateful for the extra $250 in her paycheck, Ball calls the award "a blessing."

Those she works with consider her the same, especially the international employees whom she helps in various ways. It could be paperwork from the Department of Homeland Security and U.S. Customs, or helping them apply for a Social Security card, or letting them know deadlines to renew their work authorization are approaching.

"I feel good about helping them," Ball says. "Sometimes they are right off the plane. They come here the next day and they are a little lost. So I put together a little packet for them with step-by-step instructions on things they need to do."

As Dickerson said in Ball’s nomination form, "Jackie is committed to accountability and her knowledge regarding her areas of responsibility is unprecedented."

Ball says the award was the perfect Christmas gift. "I mean who wouldn’t want an extra $250 close to the holiday?" she says with a smile. "But it’s not just that. It’s being recognized not only by your peers, but by your supervisor and other people you have a working relationship with. It made that whole difficult FLSA process worthwhile."