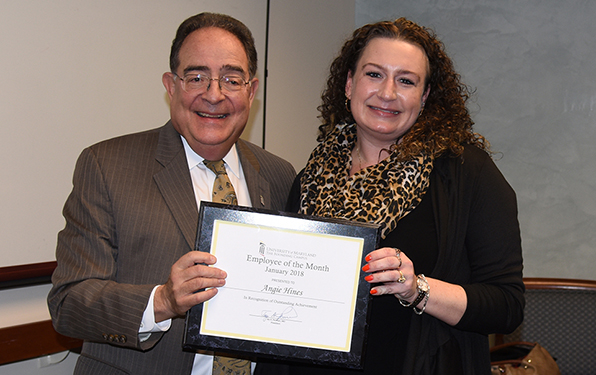 Angie Hines, senior academic services specialist in the Office of Academic Deans at the School of Nursing, says that she’s at the school so much, she’s thought of sleeping over some nights.

“I’m trying to get them to give me a bed,” joked Hines, who often works late and devotes hours on weekends and holiday breaks as well. "This way, I don’t even have to go home. I’m kidding, but I am here a lot. It’s part of the job. You have to be willing to dedicate the time.”

For that work ethic and her commitment to teamwork and efficiency, Hines was honored Jan. 31 as the UMB Employee of the Month. Dean Jane M. Kirschling, PhD, RN, FAAN, led a group of School of Nursing employees who attended the ceremony at the Saratoga Building, where UMB President Jay A. Perman, MD, surprised Hines with the award, a plaque, a letter of commendation, and a promise of $250 in her next paycheck.

“I want to tell you what your colleagues say about you,” Perman said. “They talk about you as championing an environment of teamwork. In fact, there are many comments about you being a team player. And you know how much I value that. To have employees who are all about teamwork is special, and you carry my message. I really appreciate you for that.”

“The term ‘all duties as assigned’ applies to my job,” Hines says. “And I also oversee the staff in the office — the work we do with the students, the programs, coordinating curriculum committee meetings, meeting with the students, talking about how to get certified to become a nurse, and all the steps in between.”

Hines says she has great respect for the four academic deans and considers herself one of the luckiest people on campus because “all of my bosses are amazing.” One of those bosses, Idzik, said the feeling is mutual, describing Hines’ impact on the School of Nursing as “immeasurable.”

“Angie is always going above and beyond the call of duty. She does whatever it takes to get the job done,” Idzik says. “She is not a 9-to-5 employee. When work ramps up, so does she. She is a team player and a leader. Not only does she lead the team in our office, but she has developed relationships with lead department staff to optimize practices throughout the school. She is a role model for efficiency.”

Hines’ commitment to efficiency can be seen in a program she helped to facilitate in which staff members are cross-trained on all job roles, so when someone is out sick or on vacation, the office continues to “run like a well-oiled machine,” according to Idzik.

“When I started here, we had coordinators sitting side by side who didn’t know each other’s programs,” Hines says. “If one of them was out of the office, no one could step in and assist their student if they showed up. As I got into my role, I wanted to learn more about the different programs, and we initiated that everyone needs to know something about all the programs. That way, the office doesn’t stop. It keeps functioning.”

Idzik said Hines also directed an automation initiative that has made the office nearly paperless by moving paper files to electronic files.

“She led the team to organize, scan, and save files in the database, along with working alongside the programmers to create digital filing parameters and saving profiles,” Idzik says. “Her ability to visualize and use forward thinking have been critical components in this automation. Decades of files were scanned and organized. Angie has pioneered many practices in the school and is a go-to person for automation.”

Asked where her commitment to efficiency comes from, Hines pointed to her father, a Marine.

“I grew up on a military base,” she says. “We don’t have time to slow down. We don’t have time to stop and think it out. You have to make sure you’re efficient and you’re on top of it. And then you need to make sure that you’re not only efficient, but you’re also effective in your efficiency. And if you’re not, you need to speak up and tell somebody.”

That attitude is much appreciated at the School of Nursing, says Idzik, who praised Hines’ take-charge personality. “Angie is known for saying it like it is, which can be a breath of fresh air in a world where we are often told that we have to do things one way because that’s how we’ve always done it,” Idzik says.

Hines, who is completing a bachelor’s degree in business administration this spring and will continue her studies into an MBA program at University of Maryland University College, admitted she can be blunt — “I’m very, very, very frank,” she says — but softened when talking about being honored as January Employee of the Month.

“It’s a very nice thing to do for staff members,” Hines says. “It’s nice to spend time with President Perman, so that’s very cool. And you get all this nice stuff like a plaque and a bonus. UMB is a great place to work. I’m very happy here. I’ve found that it’s very fulfilling. And you really have a lot of room to grow.”