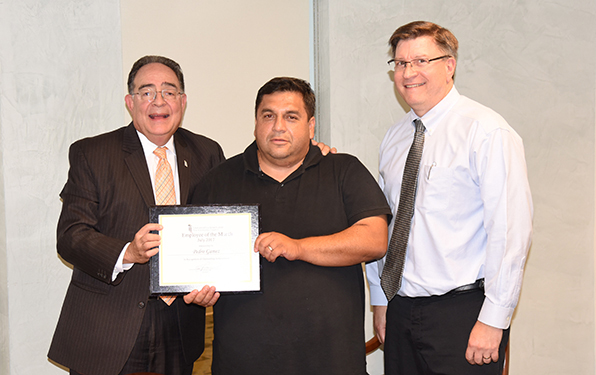 Pedro Gamez went two floors up in the Saratoga Building for what he thought was a staff picture with his Maryland Poison Center colleagues. But when University President Jay A. Perman, MD, entered the conference room on July 27 and asked for him by name, Gamez went into defense mode.

"Wasn’t me!" he exclaimed, getting a laugh from his co-workers.

"I don’t know why I have this effect on people," Perman joked. "You’re not in trouble but you did do something — something that makes us want to honor you as UMB’s Employee of the Month!"

"New car?" Gamez asked, causing his cheering co-workers to laugh some more. But despite Gamez’s jokes, it was his serious attitude and work ethic that won him the July honor.

As one of 55 poison centers across the United States, the Maryland Poison Center, part of the School of Pharmacy, receives approximately 44,000 calls per year, from the routine to the life-threatening. It is a 24-hour, seven-day-a-week operation, keeping Gamez, who has been a LAN (local area network) administrator at the center for four years, and his colleagues on their toes.

When the center, which is on the Saratoga Building’s 12th floor, needed new carpeting in May, it wasn’t an easy undertaking. It’s not like the work could be done nights or weekends. Gamez, who maintains the servers, computers, and phone systems of the center, prepared the call center's hardware to be moved during the install, and configured temporary work stations allowing staff to continue work as they moved from one location to another within the center for a week to accommodate the carpeting work.

Asked whether the carpeting guys hated him by the end of the week, Gamez replied, "The first day they did. I just kept asking them ‘how long is it going to take?’ because I wanted to move the portable system for the next day." Gamez also came in early, stayed late, and even helped move furniture.

It wasn’t the first time Gamez and senior IT specialist Larry Gonzales had been forced to make Poison Center communications more portable. When power went off in the Saratoga Building in July, during the unrest following Freddie Gray’s death and during several snowstorms, the center stayed operational even though the University was closed.

In his nomination form, Poison Center director Bruce Anderson, PharmD, DABAT, wrote "no caller to the service had any idea that there was anything out of the ordinary happening to the physical plant of the Maryland Poison Center," during the carpeting upgrade. "The service continued uninterrupted in large part because of Pedro’s efforts."

Even before the award, Gamez felt blessed to be working at UMB. "Before coming here, the job that I had went away," he said. "So it was a blessing to come here … my daughter goes to school [at College Park] for free and I’m continuing my education."

And now $250 wealthier, with a new plaque on his wall, Gamez is grateful — to his colleagues and to his "mentor" Gonzales.

Asked what the award meant to him, Gamez said, "I’m one of those quiet guys. I just come here and I’m happy. I’m just proud that I did a good job."

It wasn’t his first such award. Gamez won Employee of the Month in the Marine Corps decades ago. Now the challenges are different.

On the Fourth of July, he was about to take his three kids to the movies when the Poison Center called. "They lost internet and we couldn’t connect to the servers," Gamez recalled. "So I had to reroute the connections."

Ninety minutes later, his family went to see Despicable Me 3.

Which certainly doesn’t describe Gamez. As Perman said to him in closing on July 27 "we need more like you."

— Will Milch and Chris Zang