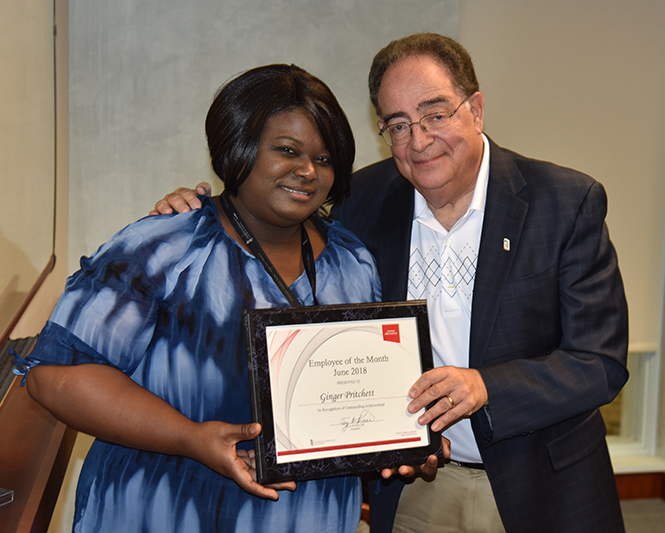 Life is good for Ginger Pritchett.

In two short years at the University of Maryland School of Nursing (UMSON), she has moved up from temporary employee to academic program specialist to registration coordinator in the Office of Student and Academic Services.

She also graduated with a bachelor’s degree in psychology from University of Maryland University College last December, is completing coursework for a certificate in sustainable urban communities and anticipates enrolling this fall in a master of public administration program.

Pritchett’s trajectory took another upward turn June 15, when she was recognized as the University of Maryland, Baltimore’s (UMB) Employee of the Month, singled out for her hard work, pleasant personality, and deep devotion to the School of Nursing, which she calls an “awesome place to work.”

A lot of people think she’s awesome, too, including UMB President Jay A. Perman, MD, who surprised Pritchett with the award in the President’s Conference Room at the Saratoga Building, where Pritchett and five UMSON colleagues were gathered for what she thought was a meeting to discuss UMB’s diversity and inclusion efforts.

“This meeting is to honor you,” Perman told Pritchett, who wiped tears from her eyes as he spoke. “Your supervisors and colleagues said it’s important to recognize you because of your work ethic and the difference you’ve made to the School of Nursing. You’ve taken on important new roles, and then you spend the time and effort to prepare someone else to take your former job.

“I also hear that you’re just wonderful with making all the students and new employees feel welcome. All of that means a lot to me. And it means a lot to the University.”

‘This Is Awesome and a Shock’

Perman gave Pritchett a plaque, a letter of commendation, and news that an extra $250 would be in her next paycheck, which the winner says will go toward buying books — “Or maybe a single book,” she said with a laugh — for her daughter in college.

“This is awesome and a shock at the same time,” Pritchett said. “You do a lot of things throughout your life, and you do them not to be recognized but just because you’re supposed to do it. So it’s just really great to be honored in this way.”

Perman’s tribute brought nods of approval and cheers from the group of co-workers, who clearly appreciate Pritchett’s contributions to UMSON’s Office of Student and Academic Services.

“Ginger is one of the hardest-working employees in the School of Nursing,” Cynthia Pumphrey, MS, assistant director, registration and clinical placements, said in nominating Pritchett. “She greets every student and every phone call with a smile and a pleasant disposition. Her achievements are numerous since coming onboard with the School of Nursing as a permanent employee.”

Among her duties, Pritchett coordinates the Bachelor of Science in Nursing (BSN) program from registration to graduation, oversees the school’s participation in the DAISY Foundation Awards each semester, and organizes the VIP section for commencement. She even lends her proofreading skills to the graduation cards and program. “She assures that every I is dotted and every T is crossed,” Pumphrey said.

As the DAISY Foundation Awards coordinator, Pritchett works as a liaison with the foundation, UMSON, and alumnus Cynthia Sweeney, MSN, BSN ’76, RN, the foundation’s executive director. The DAISY in Training Award honors BSN students who deliver clinical care in a compassionate way to patients and their families. “I like to make sure the program is running smoothly,” she says.

She does her part to make the Office of Student and Academic Services run smoothly, too, in particular, as Perman noted, by assisting in the training of her replacement as academic program specialist after being promoted to her current job last December.

“We couldn't have oriented the new hire without Ginger’s help, expertise, and organizational skills,” Pumphrey said. “Ginger had such detailed registration training/process material to share with the new employee and took a great deal of time out of her schedule, now straddling two roles, to make them feel welcome and bring them up to speed in record time.”

Pritchett offered thanks to Pumphrey, Lori Harris, MA, director of registration and clinical placement, and Larry Fillian, MEd, associate dean of student and academic services, saying they are “truly amazing” people to work with. In fact, she says her colleagues are the best thing about her job.

And she found it especially noteworthy to be recognized by Perman.

“Normally, we’re ushering Dr. Perman in for graduation and then ushering him out,” she said, “but it felt great to stand side by side with him and to hear him honor me and thank me for being an employee at UMB. I find that to be beyond humbling.”