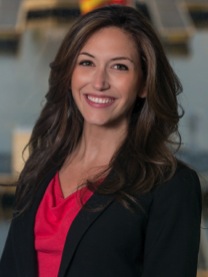 On March 3, 2015, Jessica Glazer, Department of Psychological and Brain Sciences at Johns Hopkins University and the founder & CEO of Glazer Talks, discussed the emergent field of positive psychology — the science of human potential — and shared techniques that help us become more fulfilled personally and professionally.

She also addressed the topic of positive communication, as we explore ways to express ourselves — authentically, successfully, and in a way that promotes improvement, growth, and understanding — in person, on the phone, and online.

Women Show Fortitude at UMBrella Launch ▾
The University’s new UMBrella initiative was formed with women’s empowerment in mind. But UMBrella’s launch on March 3 showed the University already has a determined group of women as with sleet in the air and ice on the sidewalks more than 130 trudged to the Southern Management Corporation Campus Center for the kickoff event.

The University’s new UMBrella initiative was formed with women’s empowerment in mind. But UMBrella’s launch on March 3 showed the University already has a determined group of women as with sleet in the air and ice on the sidewalks more than 130 trudged to the Southern Management Corporation Campus Center for the kickoff event.

UMBrella chair Jennifer B. Litchman, MA, chief communications officer and vice president and special assistant to the president, thanked her “heroes” for braving the elements after an earlier postponement and turned the program over to Jessica Glazer, MS, a lecturer in the Department of Psychological and Brain Sciences at Johns Hopkins University and founder and CEO of Glazer Talks.

“Societal messages to women — from both men and women — are mostly negative,” saidGlazer, who travels internationally espousing the principle of positive communication. “We need to imagine what we can be” by turning those negatives into positives.

The goal of the UMB Roundtable on Empowerment in Leadership and Leveraging Aspirations (UMBrella) is to help women achieve their potential, find their voices, and feel empowered. The UMBrella Group works to engage a community that supports the success of women, advances women into leadership roles at UMB, and champions women at all levels of its organization.

Glazer, a licensed psychotherapist, captivated the audience with her mix of memorable quotes, research data, and common sense analogies. “Positive psychology is not the negation of sadness,” she said. “Only two types of people don’t sometimes feel sad: the dead and the psychotic. We have to move beyond the neutral and find a positive balance in our lives.”

She said there are three levels of positive communication: societal communication; interpersonal communication; and self-talk. She surprised the crowd with the answer to “what percentage of the day are we communicating?” After guesses ranging from 30 to 70 percent, Glazer smiled and said “100 percent. We’re always communicating in some way,” whether it’s through our actions, our words (only 7 percent), or talking to ourselves.

She discussed “eudaimonia,” the joy one feels while striving toward one’s potential, and how “happy” people produce more and are 10 times more engaged in their work. “You are fortunate to have a group like this at UMB where you can support each other,” Glazer said. It’s easier to turn a negative mindset into a positive one “with this type of support structure.”

Apologizing to the handful of men in the audience, Glazer said “we’re starting with a disadvantage as women.” She cited studies where when male executives spoke up they were considered 10 percent more competent; when female executives spoke up they were considered 14 percent less competent. Another example compared identical case studies written by either “George” or “Georgia.” The female was viewed as “more power hungry, disingenuous, and less kind” than her male counterpart.

Gender stereotypes date back to school, said Glazer, where outspoken girls were “bossy” but comparable boys were “leaders.” Body language and non-verbal actions like making eye contact and nodding to show understanding were discussed. Perceived by some as negative female attributes, Glazer says they are essential for effective positive communication. Even something as seemingly benign as whether a test has a “select gender” box on it has ramifications, she said, with women doing poorer on tests after checking their gender than if they weren’t asked.

Glazer was optimistic that the status quo could change. “William James said, ‘The greatest discovery of my generation is that human beings can alter their lives.’ I sincerely believe that.”

Where does this change have to occur? Inside each one of us, she said, showing a picture of a kitten looking into a mirror and seeing a lion. Citing two quotes, “whether you think you can or think you can’t, you’re right” and “would you be best friends with someone who talked to you the way that you talk to you?” Glazer discussed how people are their own worst critics. “We’re tinted by negativity. We magnify the positive attributes of other people and minimize our own. We are too often unkind to ourselves.”

So before answering some questions, Glazer asked those assembled for the next few days to “sit up straight, take up more space, and be present. Not only because you can but because it will be good for you.”

About Jessica Glazer ▾
Glazer is the founder and CEO of Glazer Talks. She travels internationally as a keynote speaker and holds positive psychology-related seminars for corporate and academic clients. She presents on topics including leadership, positive communication, professional image, work-life balance, women in business, and putting the tenets and techniques of positive psychology into practice in personal and professional settings.

Glazer also is a lecturer in the Johns Hopkins University Department of Psychological and Brain Sciences. She teaches two large lecture courses, “Positive Psychology” and “Careers in Psychology.” Her class on positive psychology was rated by students as “one of the best courses at Hopkins.”

Her teaching career began at Harvard University, where she spent several years as a head teaching fellow for the psychology and English departments. While there, she taught for the largest psychology class in Harvard’s history, "Positive Psychology," and also taught such classes as "Psychology of Leadership," "Social Psychology," and "Wit & Humor." Glazer also was appointed as an undergraduate academic advisor, writing tutor, and psychology career advisor. One of the highest-rated teaching fellows during her time at Harvard, Glazer has the distinction of having won a teaching award for every class for which she taught.

Previously, she served as director of career programs and advising at the Johns Hopkins Carey Business School, where she was responsible for career advising and professional development at the Baltimore and D.C. Carey Business School campuses for 1,700 students and 18,000 alumni. Before her time at Hopkins, Glazer managed employer relationships for the consulting and health care industries at the Wharton School at the University of Pennsylvania.

Glazer holds an MS in counseling from the Johns Hopkins University School of Education and a BA in sociology from Brandeis University. She completed her graduate counseling internship at the Sheppard Pratt Center for Eating Disorders, where she provided individual and group counseling to adult and adolescent inpatients. She is a certified SDI Level 1 Facilitator, a Level 2 Facilitator for Gallup’s Strengths Finders Assessment, and a certified Myers-Briggs (MBTI) Practitioner.

Photos From the UMBrella Launch