When Robert K. Ernst, PhD, discusses his work at the University of Maryland, Baltimore (UMB) the word “exciting” comes up a lot. Often it’s modified with another word, like “super exciting” or “very exciting.” 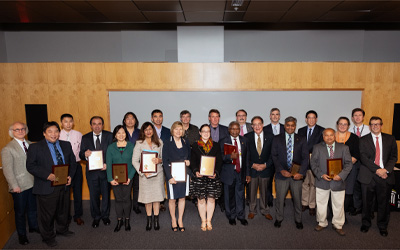 Leaders with some of the 48 researchers who received plaques for technology patents — UMB’s best year ever.

So when Ernst, professor and vice chair of the Department of Microbial Pathogenesis at the School of Dentistry, gave his 2019 UMB Entrepreneur of the Year Lecture on Oct. 23, his “exciting” enthusiasm was contagious. No matter that the Founders Week presentation was a sequel to his performance from two years before when he was UMB’s Researcher of the Year.

“The first time I was shocked; this time was a big surprise,” a smiling Ernst said to begin his half-hour presentation, “Pathogens, Patents, and Pataigin: Delivering Diagnostic Development,” in the crowded School of Dentistry auditorium.

His research focuses on the interplay between a bacterial pathogen and the host defense mechanisms. He has been awarded multiple National Institutes of Health (NIH) grants to develop a diagnostic test to more rapidly identify bacteria- and fungi-caused infections, and co-founded a company, Pataigin, aimed at developing a method to quickly and accurately identify disease-producing agents, or pathogens.

He shared the credit with many others. In fact, his first PowerPoint slide was titled “The Really Important People” and listed roughly 40 current and past collaborators. “I’m truly blessed to be surrounded by great people,” Ernst said.

One of them is David Goodlett, PhD, professor in the School of Pharmacy and visiting professor in the School of Dentistry, who in 2016 helped Ernst launch Pataigin (Gaelic for “pathogen”), a company that aims to commercialize technology to develop a “barcode” for each pathogen strain. A chemical analysis known as mass spectrometry would then identify the disease based on the barcode.

This barcode technology will allow clinicians to identify pathogens directly from blood, urine, or wounds without the need for cell culture. Not only will it offer superior performance compared to current diagnostic options, it also could save patients from potentially harsh therapies.

Pataigin has developed a test, called BACLIB, that quickly and inexpensively identifies bacteria and fungi causing infections, allowing clinicians to make decisions at the “point-of-care.” Ernst pointed out that BACLIB is fast and efficient; detects antimicrobial resistance; is sensitive and specific; with data conducive for libraries.

“We now have a platform, including a rapid extraction procedure, software library, and a way to analyze the barcode and report it back to physicians from beginning to end in 70 or 80 minutes — it’s really not very long,” he said. “And that’s what is really exciting.”

Ernst spent the end of his presentation on adjuvants, which he described as a component of a vaccine that aids, enhances, or sharpens immune response. “Research on this has been stagnant for a super long time,” he said. “There are only five approved adjuvants in America right now.”

Ernst hopes to change that. In October 2018, he was awarded a five-year, $6.4 million contract from the NIH’s National Institute of Allergy and Infectious Diseases to develop and test new adjuvants for use in future vaccines. Collaborating with the likes of Russ Middaugh, PhD, of the Macromolecular Vaccine Stabilization Center at the University of Kansas and Chris Jewell, PhD, at the University of Maryland, College Park has heightened his optimism.

“Russ used to work for Merck and formulated their commercial vaccines,” Ernst said, “and Chris is an amazing scientist who designs and produces the microneedles that we use. We originally used these microneedles to evaluate if a bacteria can cause disease by pressing it onto the ear of a mouse and seeing if it causes disease.” Ernst elaborated that they were working with Jewell to find ways to advance the design.

The event began with UMB President Jay A. Perman, MD, discussing some other superstars — 2012 UMB Entrepreneurs of the Year William Blattner, MD, and Robert Redfield, MD, who with Robert Gallo, MD, founded the Institute of Human Virology (IHV) at UMB. Perman saw firsthand what IHV’s work has brought in the fight against HIV/AIDS on a tour in Africa. “That’s why entrepreneurism is so powerful. The people we help; the people we save,” he said.

After Ernst’s remarks, Phil Robilotto, associate vice president of UMB’s Office of Technology Transfer, awarded plaques to the researchers who received a U.S. patent in the last fiscal year. In total, UMB received more than 200 patents in FY2019 — the University’s best year ever.

Read more about Ernst and the other Founders Week award winners.