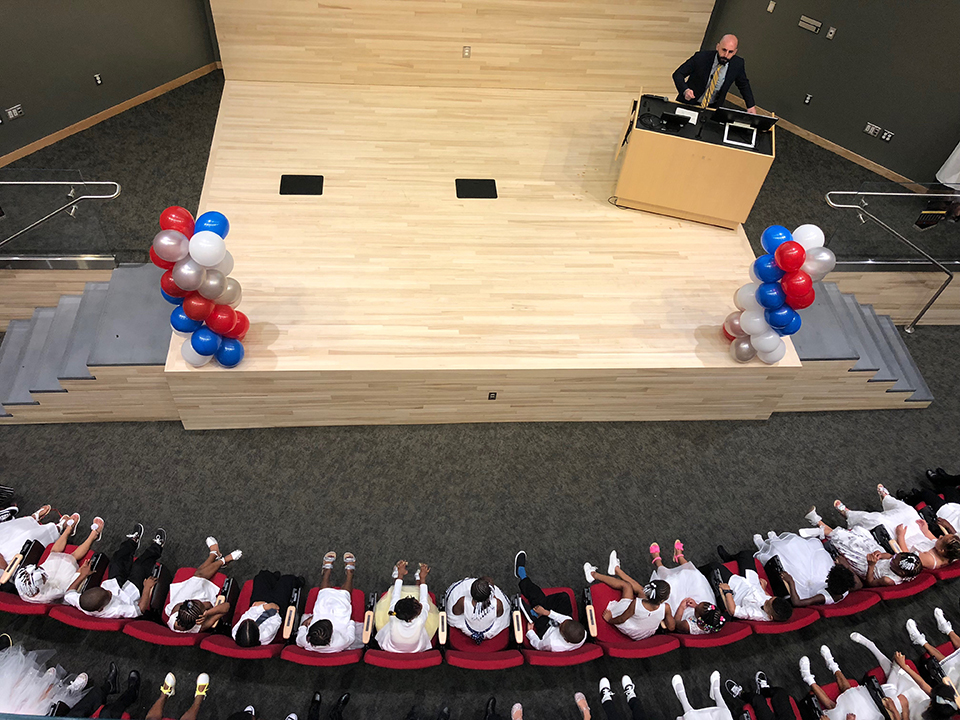 Four weeks after UMB’s commencement celebration, some of the institution’s closest K-12 partners and neighbors celebrated their graduation exercises on campus.

Ceremonies were held at the University of Maryland School of Medicine’s Leadership Hall, beginning with Southwest Baltimore Charter School on June 8 for its eighth-grade promotional ceremony, followed by James McHenry Elementary School’s kindergarten and pre-kindergarten ceremonies June 11, and culminating with George Washington Elementary for a fifth-grade graduation June 13.

Valedictorians addressed their classes, students reflected publicly on academic and social challenges they’ve overcome, family members cheered their loved ones and, most of all, UMB was able to play a role in the successes of its neighbors.

The University’s K-12 partners value the opportunity to culminate their academic year on the UMB campus, as eloquently expressed by Christophe Turk, principal at James McHenry Elementary/ Middle School, as he used part of his remarks to thank the University for allowing use of the space.

“Facilities matter. They send a message,” Turk said. “And this beautiful space sends a positive message worthy of our students and families. It says we value you. And we want only the best for our children.”

Please join UMB President Jay. A Perman, MD, and the Office of Community Engagement in congratulating the graduates of these and the University’s other neighboring K-12 schools and encouraging their continued commitment to education and achievement.