David C. Gray, JD, PhD, MA, says we are living in an age of surveillance, and if you don’t believe him, just look around.

“Everywhere you go, there is a surveillance camera,” Gray, the Jacob A. France Professor of Law at the Francis King Carey School of Law, said during his 2019 University of Maryland, Baltimore (UMB) Researcher of the Year Presentation on Oct. 22 in the school’s Moot Courtroom. “There are two cameras in this room, and if you step outside, there are three in the atrium. 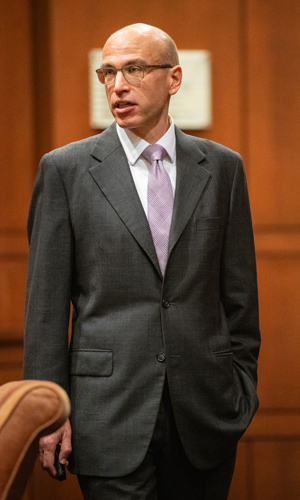 UMB Researcher of the Year David C. Gray delivers his presentation, “The Fourth Amendment in an Age of Surveillance.”

“All around Baltimore, there are surveillance cameras watching what you’re doing. And there’s this little Cessna airplane that flies above us all the time with 100-megapixel cameras that are able to surveil a 30-square-mile area.”

Gray also pointed to emerging technologies that give law enforcement agencies more tools to monitor citizens, such as GPS tracking on cellphones and fitness devices, radio-frequency identification tags on clothing, and facial recognition programs. And, he added, if you think the Fourth Amendment of the Constitution is about your right to privacy, think again. “It’s all about government power,” he said.

The interplay among surveillance, privacy, and government power was paramount during Gray’s presentation, as he took the audience of 100-plus on an intriguing and informative ride through the history of the Fourth Amendment, past and recent court cases, and how it’s all intertwined in an era when tracking and surveillance devices are, as he noted, omnipresent.

Gray’s lecture was titled “The Fourth Amendment in an Age of Surveillance,” which also is the title of his 2017 book that explored the law that guards against unreasonable searches and seizures by the government. He was introduced first by UMB President Jay A. Perman, MD, and then Carey School of Law Dean Donald B. Tobin, JD.

Perman noted that UMB’s Researcher of the Year honor typically has gone to faculty members from the University’s health professional schools but that it was past time to recognize legal scholarship.

“I often talk about our faculty creating the knowledge that saves us and sustains our health,” Perman said. “But it’s clear that Dr. Gray and his colleagues at the Carey School of Law create the knowledge that protects us, that safeguards our rights, that holds those in power to account, that defends our democracy and preserves our rule of law.”

Said Tobin: “Dr. Gray’s multidisciplinary expertise and methods allow him to advance an understanding of both theoretical and practical concepts. His work on the Fourth Amendment and surveillance bridges philosophical principles like freedom, liberty, autonomy, and governmental power. We also recognize Dr. Gray as not just a fantastic scholar, but also a fantastic teacher.”

Gray’s teaching skills were much in evidence during the talk, as he used PowerPoint slides, keen insight, and his trademark wit to enthrall the crowd. He detailed several 20th-century doctrines that emerged from court decisions and seemed to put certain surveillance technologies beyond the reach of Fourth Amendment regulation.

The Third Party Doctrine held that anytime you shared information with a third party, the Fourth Amendment did not protect you against that information being shared with the government. With the Public Observation Doctrine, individuals did not have a reasonable expectation of privacy in anything exposed to public view, even if it involved, as it did in one court case, the use of a helicopter to look through a house’s skylights. And the Standing Doctrine involved plaintiffs needing to prove that they had suffered a personal deprivation of their individual expectations of privacy in order to press a Fourth Amendment claim.

The latter doctrine came into play in 2013, when the Supreme Court dismissed Amnesty International’s lawsuit against James Clapper, the former U.S. director of national intelligence, and the federal government over the Section 702 surveillance program, which aimed to collect foreign intelligence from non-Americans located outside the United States.

“The ACLU and a number of human rights groups said, ‘This is going to violate our Fourth Amendment rights,’” Gray said. “And the court said, ‘How do you know? Has your reasonable expectation of privacy been violated?’ And those people said, ‘We don’t know because it’s a secret surveillance program.’ And the court said, ‘It’s not our problem. Until you know that your reasonable expectation of privacy has been violated, you have no standing.’”

However, Gray noted that two other Supreme Court decisions this decade have illustrated a shift in the court’s thinking on the Fourth Amendment and new surveillance technologies — Jones v. United States, and Carpenter v. United States. In the Jones case, the court found that law enforcement’s installation of a GPS tracking device on a suspect’s vehicle was a physical intrusion, and therefore an illegal search based on the Fourth Amendment.

So Gray and several law school colleagues wrote a series of articles and essays promoting what they described as a technology-centered approach to the Fourth Amendment.

“In our view, the Fourth Amendment should limit government access to means and methods that are capable of facilitating programs of broad and indiscriminate surveillance, the kinds of technologies that would allow for so-called ‘panvasive’ surveillance,” said Gray, whose work during this time period led to his 2017 book.

Using a theory of interpretation called “public meaning originalism” that was championed by the late Justice Antonin Scalia, Gray delved into the text of the Fourth Amendment and what it meant in historical context when the language was drafted and adopted. He concluded that the amendment was about government power, not privacy; that the rights were collective, not individual; and that those rights were to be protected by instituting remedies that constrain governmental behavior.

Then came the Carpenter case, where Gray, Carey Law colleagues, and professors from other law schools submitted an amicus brief to the Supreme Court arguing that if law enforcement agencies seek cellphone site location information (CSLI), that act should be considered a search governed by the Fourth Amendment. And the court agreed.

“What is the nature of the right that’s being protected?” Gray said. “Well, it’s guaranteeing a collective security against unreasonable searches and seizures, in particular the means and methods that would be capable of facilitating programs of broad, pervasive, and indiscriminate surveillance. And guess what? Cellphone site location information is one of those. And what does this all mean? If you want someone’s CSLI, then go and get a warrant.

“This is what we do at the Carey School of Law. As law professors, we see something in the world that doesn’t seem quite right or we see an injustice, and we go down into the stacks, we go deep into the law books, and we come back with solutions. We come back with new ideas, new concepts, new ways of looking at things, and new and concrete suggestions.”

Read more about Gray and the other Founders Week award winners.