McClain used a vivid cartoon drawing on the back of a box of Corn Pops as a tongue-in-cheek way to explain implicit bias to attendees of his Diversity Advisory Council Speaker Series presentation, “Seeing the Invisible: How Implicit Bias and Other Factors Can Impede Teaching, Learning, and the Delivery of Professional Services,” on Nov. 9.

The picture, designed to keep children occupied as they eat their cereal,  shows a busy scene at a shopping mall filled with animated corn pops. “The corn pops are having a blast,” McClain said. “These corn pops are skateboarding down the escalator, they’re swimming in the milk fountain, they’re having a really great time.” After a pause McClain continued, “Then there’s one corn pop doing manual labor. Everyone’s having fun, except for this one corn pop who’s sweeping the floor.”

McClain pointed to a screen projection of the image. Circled in red, among all the yellow corn pops is a brown one, with a hat tilted to one side, sweeping up with a broom. “This corn pop fits so many brown stereotypes,” said McClain as he pondered how the image made it to grocery shelves despite supposedly going through many chains of review.

“It’s not really Kellogg’s,” he explained to the audience of 100 UMB staff, students, and faculty at the SMC Campus Center, saying the picture is just one example of many in modern society. “It’s the idea that the things we face repeatedly throughout our lives send subconscious ideas into our brains that everybody else can have a great time, but the person of color needs to be cleaning up after us.” 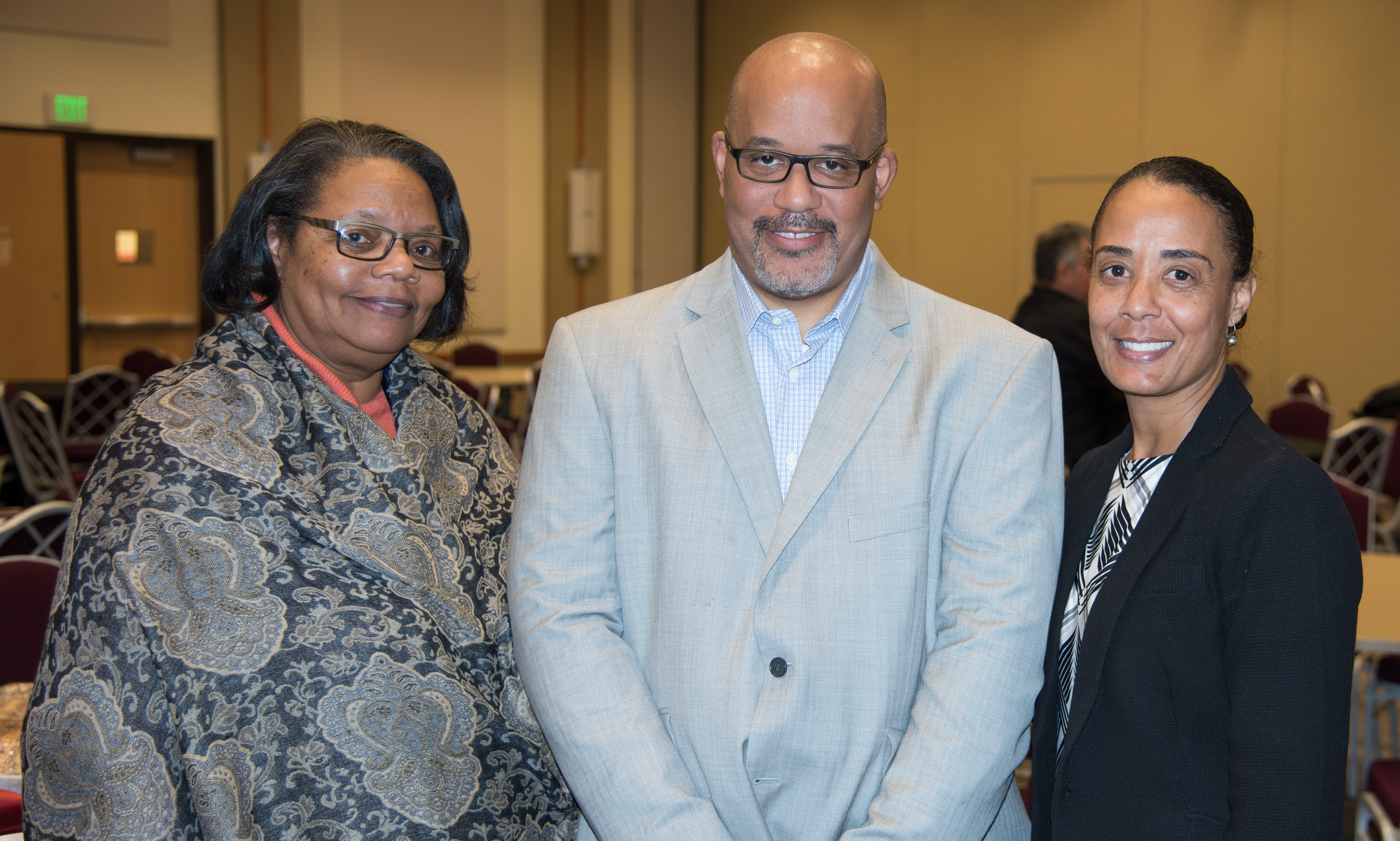 According to McClain, implicit bias describes “subconscious snap judgments we all make concerning our environment.” Studies show we have natural reactions that we develop through socialization for our safety, said McClain. “And they’re good and an appropriate and useful part of our brain,” he noted, giving the example of the brain categorizing snakes as ‘dangerous.’ The problem arises when the brain subconsciously categorizes people. “It works fine when we’re talking about snakes in the garden, but it’s a little less fine when we’re thinking about this happening subconsciously and it relates to people,” he said.

“If you’re a teacher and you have implicit bias that causes you to think some students are not as capable as other students, where are you likely to spend your energy?” he asked.

McClain, who is vice president for diversity for the national Association of Academic Support Educators, noted studies that show some health care providers have implicit bias that can affect diagnoses and treatment decisions. He cited a pediatric pain study that showed in situations with comparable pain complaints, white children were more likely to get the pain medication they needed than black children.

“We all shake our heads, that sounds horrible,” said McClain who was careful to point out that implicit bias is not grounded in a moral choice but a subconscious association. “But it’s probably not based on a conscious ‘I’m going to treat white patients differently,’ that’s probably not what’s happening,” he said. “But there’s something that’s happening in the brain that says I don’t trust that claim of pain as much as I do this one.”

The good news is that implicit bias is not a permanent state of being. “We can do something about this,” said McClain, who kept the audience involved with PowerPoint questions they could text responses to and watch the aggregate response. “It takes a long time to get in our brains and it will take a long time to unwind those thoughts to reprogram our brains,” but it can be done, he said.

Voluntary training can help and he encouraged faculty and teachers in particular to adopt a growth mindset regarding students.  “There are two ways to look at intelligence,” he said. “One is that it’s fixed and [students] are who they are and they can’t do any better. The other way to look at it is the growth mindset, that with nurturing we can grow.”

McClain, who has been a professor at the Carey School of Law for 12 years, said, “If we view those we are teaching with a growth mindset, the more likely they are to believe they can do something, even if in the moment they aren’t doing particularly well.”

He asked University administrators to use a growth mindset when it comes to admissions and hiring, noting the success of the UMB CURE Scholars Program that is creating a pipeline to prepare West Baltimore middle schoolers for health and research careers. “Just think of the work we could be doing in high schools and undergraduate institutions to really help them prepare along the way,” he said.

McClain also discussed “stereotype threat,” a little-known term that describes the fear of confirming a negative group stereotype. It can affect anyone who belongs to a group that is the subject of a negative stereotype, including minorities and women, by lowering self-esteem, increasing anxiety, and hampering performance. He described the phenomenon as “having a second conversation in your head,” in addition to the task before you that increases stress levels. He used the example of a lone woman on a math team might feel added pressure to answer questions correctly because wrong answers would confirm a stereotype that women are bad at math. The increased anxiety creates a cognitive load that takes away from the woman’s ability to function effectively in a competition, according to the theory.

McClain said that stereotype threat can affect both high- and low-achieving students and that it can impact admissions, school, and work performance.

A member of UMB’s Diversity Advisory Council, which promotes the University’s commitment to diversity, inclusion, and equity, McClain said he hoped his presentation would make people “start to think about what we do and how we affect other people and sometimes how what other people do can affect us in ways we don’t appreciate.”

Sarah Archibald, PhD, MA, said she came to the talk to improve her understanding of bias in her role as a graduate program director for online research administration. “If you don’t recognize it, you can’t call it out,” she said.