University of Maryland, Baltimore (UMB) President Jay A. Perman, MD, discussed all of them and more in his sixth annual State of the University Address on May 9 in the School of Medicine’s MSTF Leadership Hall.

(Read the speech or see a video below of the president's address.)

Before a crowd of 500 that included legislators, business partners, community leaders, and UMB faculty, friends, staff, and students, he lauded UMB’s accomplishments of the past year “as a potent force for the public good” and addressed challenges to come in his 70-minute presentation. 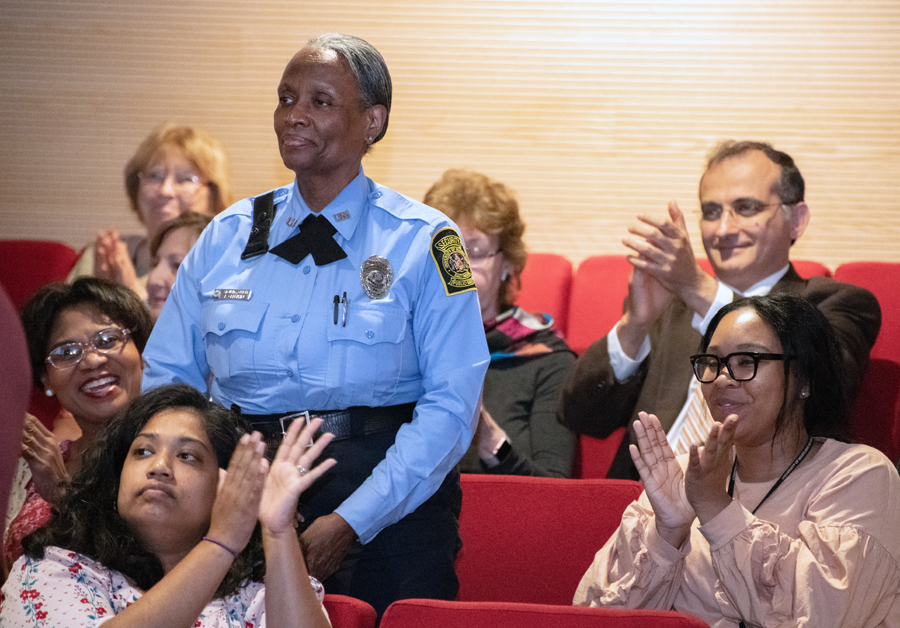 UMB security officer Evelyn Greenhill is applauded during the speech for the impact she is making as a mentor in the UMB CURE Scholars Program.

“It is the honor of my life to lead UMB,” he said. “It is an honor to be challenged every day to lead it in a way that brings pride to all of you who have chosen to learn and work here, all of you who carry out our mission to heal, cure, and strengthen; to save lives, enrich communities, advance justice, and promote the rule of law.”

Perman often credits UMB’s students with having the best ideas, and he stressed this during his address while promoting a new phrase: “Believe students.”

Among the initiatives he credited them with are the Community Engagement Center (CEC) in West Baltimore and the Grid (Graduate Research Innovation District), established to enhance support for entrepreneurs across campus. Future plans that stem from student suggestions include a multicultural center, food options for the 26 percent of students who say they don’t have enough food for themselves or their households, and a significant expansion of UMB’s Student Counseling Center, a primary source of mental health services for students.

“Our students don’t complain a lot. They’re too busy,” Perman said of the 6,800 who attend UMB’s six professional schools and interdisciplinary Graduate School. “Still, I always ask them to leave this place better than they found it. And somehow, every year, they do.”

Perman began his address by mentioning UMB’s “uncompromising” core values. A climate survey on diversity rolled out this spring showed students “do feel welcome here” but some don’t “and that’s not OK,” said Perman, who promised a plan to make UMB more open and inclusive, an effort that began with a 2015 President’s Fellows white paper on diversity. “A major diversity initiative undertaken this year entails using discretionary dollars to support schools in their efforts to recruit diverse faculty of color.”

To open up frank discussions about sexual harassment, Perman and Title IX coordinator Mikhel Kushner, JD, MSW, have been holding town halls. Perman also convened a Task Force on Sexual Harassment. “All schools are represented among the students, faculty, and staff on the task force, and I look forward to their recommendations this summer,” Perman said.

UMB reaching record-breaking levels as a research powerhouse was noted.

“Last May, during this very State of the University Address, I predicted we’d hit $600 million in grants and contracts for the fiscal year. I was wrong,” Perman said. “We hit $667 million. And since that prediction worked out so well for me last year, this year, I’m forecasting that we’ll do at least as well. Our FY18 number is an incredible 20 percent jump over the year before, a 40 percent jump over five years ago.”

In the past year, UMB disclosed 145 faculty inventions for patenting, licensed 43 technologies, and launched eight startups from its own intellectual property. Three startups were acquired by multinational health care corporations for hundreds of millions of dollars.

Community engagement has been a Perman priority since he took over as UMB president in 2010. A 2014 UMB white paper project by the President’s Fellows found a community full of distrust, exacerbated by a century of disinvestment. Two videos Perman presented, one featuring Dotie Page, a Poppleton leader who attended the address, and another marking the CEC’s growth over four years, showed how far UMB has come in reaching across Martin Luther King Boulevard with programs like the Police Athletic/Activities League.

He spoke of the purchase of a 20,000-square-foot building on Poppleton Street to be the CEC’s permanent home. He thanked the late House Speaker Michael Busch for his support of $4 million from the state, with UMB donors raising several million more. The United Way of Central Maryland and the Southwest Partnership neighborhood coalition also were credited for their help.

“Contractors bidding on the CEC project must tell us how they’ll hire local workers, how they’ll engage with workforce development agencies,” Perman said. “I had a meeting a couple of months ago with Ravens legend Ray Lewis, who, I’m proud to announce, now sits on our UMB Foundation board, and he told me that the community won’t ‘own’ the CEC unless they help us ‘bring it up.’ And I believe that.”

Perman also shared how Promise Heights, a program through the School of Social Work, had qualified for a five-year, $30 million grant from the U.S. Department of Education to expand its “cradle-to-career” work in Upton/Druid Heights. He described how Promise Heights helped a neighbor named Jackie gain confidence in her parenting skills and enroll her daughter in Head Start. “Then Jackie finished cosmetology school, as she had hoped to do, and landed the job she wanted, which gave her even more confidence in her ability to support her family,” Perman said. “That’s the virtuous circle.”

He also congratulated the Carey School of Law on its new center, called ROAR — which stands for Rebuild, Overcome, and Rise — where victims of crime and their families can access wraparound legal, social, medical, and mental health services, all in one place. He also shared his excitement about a revitalized “public square” for Lexington Market and UMB’s Live Near Your Work Program.

In addition to the local community, UMB also touches the global community. The University has joined the ACE Internationalization Lab to ensure that global learning opportunities are woven into its curricula. Its Center for Vaccine Development and Global Health (CVD) and its Institute of Human Virology (IHV) are world leaders. UMB is hosting its first Global Summit the end of this month, and “it’s long overdue,” he said.

“You know, between the CVD and IHV alone, we have 1,200 program staff and community health workers at our international sites,” Perman said. “Almost all of these colleagues are nationals of the host country. They work with us to train, treat, and serve people in their own communities. But they don’t always feel they’re a part of UMB. So we need to enlarge our family, and bring them into our goals and our planning.”

Perhaps the biggest ovation came when Perman spoke of security officer Evelyn Greenhill and the impact she is making as a mentor in the UMB CURE Scholars Program. She provides hats, coats, and gloves when the scholars don’t have warm enough clothes and sponsored a seventh-grade scholar to do a spring break tour of historically black colleges and universities along the East Coast. “She donates a portion of her paycheck every two weeks to the UMB CURE Scholars Program,” he added.

Perman closed his presentation by thanking those assembled “for your extraordinary partnership on this journey.” Then, to celebrate State Employee Recognition Day, the crowd moved from Leadership Hall to the plaza outside Health Sciences Research Facility III where food trucks provided pizza, ice cream, funnel cakes, lemonade, and more.

Several students from the schools of pharmacy (SOP), dentistry, and medicine (SOM) joined the throng of UMB guests on the plaza, delighted with an unexpected study break. “This is just what we needed at the end of final week,” said Pavan Patel, a first-year PharmD student who was chatting with fellow students and faculty members from SOP.  “I really like it,” he said of the food and the camaraderie.

Similarly first-year medical student Serban Negoita said he had ceased studying when he got a text from a classmate. Negoita said they had momentarily abandoned prep for a May 20 exam to enjoy pizza and either funnel cake or ice cream. He went with the ice cream, no sprinkles.

Jennifer B. Bannon, MBA, a finance manager in the SOM Oncology Program in the Paca-Pratt Building, was taking in the ambiance of the plaza with its public art. “I don’t work on this side of campus. How green and open it is!” she observed.

Although the outdoor reception was a first, the president’s annual address is a must for Bannon, who said she comes every year. “I’m always inspired by his speech,” she said.

A mentor’s role in the UMB CURE Scholars, in which Bannon is involved through grant management,  and Promise Heights’ impact  in reducing infant sleep-related deaths were  among several topics that moved her in this year’s speech. “It makes you feel you’re a part,” she said.

Patricia Fanning contributed to this article.