In the past year, the University of Maryland, Baltimore (UMB) has faced challenges unlike most in its 209-year history. But through perseverance, teamwork, and community engagement, UMB today stands stronger as an anchor institution that is an integral part of Baltimore's rebirth from the unrest of spring 2015.

Such was the message that UMB President Jay A. Perman, MD, delivered in his third annual State of the University Address on May 4.

“It’s been a busy year — to me, a deeply rewarding year — and, I believe, a watershed year for uniting around the cause that has come to define UMB: improve the human condition and serve the public good,” Perman said to roughly 300 people in the School of Nursing Auditorium.

Following a tradition dating to Perman’s inauguration ceremony in 2010, the program featured a student orchestra from a local partner school — this time students from Franklin Square Elementary/Middle School. After their song, Perman, a pediatric gastroenterologist, pointed out that Franklin Square students recently had taken two medals in the statewide Science Olympiad as part of UMB’s CURE Scholars Program, a pipeline initiative that prepares middle school children for health and research careers. 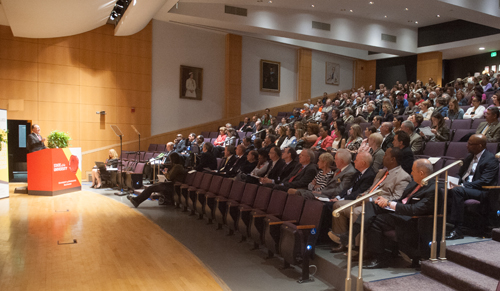 The children of the Franklin Square Elementary/Middle School entertained the crowd with a musical performance before the 2016 State of the University address.

Outreach to the community was a popular theme during the hourlong speech. Already thoroughly invested in its West Baltimore neighborhood, UMB ramped up its efforts after the unrest last spring.

Sometimes progress was slow. When UMB opened its Community Engagement Center last fall, only a few people came despite window signs saying “Free resources for members of our community.”

Said Perman: “So we went door-to-door and asked neighbors why they weren’t stopping in. And they said, ‘We didn’t know that was for us.’” Now, they know, with the West Baltimore center logging 2,000 visitors since last fall, “filling a desperate need” with activities like School of Nursing-led fitness classes, the law school’s Just Advice Clinic, a weekly organic market, School of Social Work financial counseling, Training Tuesdays, Workforce Wednesdays, and more.

“Community engagement isn’t sustainable if it’s not mutually beneficial,” Perman said. “What we get out of this center is just as important as what we put into it. The center is becoming a place for our students to learn what it’s like to do grassroots community work.”

A major fundraising campaign, with help from the General Assembly and matching dollars from private donors, is planned to move the center into a bigger, permanent home in Poppleton.

It was just one of several funding initiatives Perman mentioned. He said he is “thrilled” the University of Maryland BioPark will be growing again. The City Council approved a financing deal enabling construction of the BioPark’s third commercial lab and office building, 873 W. Baltimore Street.

“The deal lures the Cambridge Innovation Center to Baltimore as the building’s anchor tenant,” Perman said. “CIC is the nation’s leading business incubator. They’ll help us fill this 250,000-square-foot building, which will house more than 100 companies and employ 900 people.”

UMB and the BioPark’s developer, Wexford Science + Technology, are also kick-starting a fund for community projects — “and they will absolutely be community projects,” Perman said, “because community members will have control of the board that distributes the money.” After the initial contribution of $1.1 million, BioPark tenants will contribute another $150,000 to the fund every year for 20 years.

Hollins Market and Lexington Market are among the possible beneficiaries. “We have a desperate need in Baltimore for fresh, healthy, and accessible food,” Perman said. “We can remake Hollins Market into this resource for the community.”

“UMB owns a dozen buildings heading up to the market [which is scheduled to be rebuilt by the city]. As the market is remade, these two blocks can be remade in kind,” Perman said. “And we can do all this without displacing people, without wiping out neighborhoods, without destroying the community we intend to strengthen.”

UMB also is helping small local restaurants compete for its catering dollars. A year ago, the University was spending .01 percent of its catering dollars at businesses in West Baltimore, roughly $1,000 a year. “One year later, we’ve spent $36,000 in West Baltimore,” Perman said, adding that with UMB’s help, these eateries have secured another $50,000 in new money from city businesses.

Perman also was proud to announce additional funding for UMB employees and students. The budget passed by the legislature includes a merit increase averaging 2.5 percent for University System employees.

Citing the need for scholarship support, Perman said the UMB Foundation will renew its matching program, a 50-cent foundation match for every donor dollar raised, through the end of the year. This UMBF strategy raised $9.7 million in new scholarship money several years ago. Perman said such support is crucial.

“UMB’s academic programs are competitively priced. But I can guarantee that is cold comfort to students, “ Perman said. “It’s little relief to a new dentist looking at a crushing debt of $200,000, to a new pharmacist struggling under loans of $140,000, to a new physician signing away $2,000 a month in loan repayments.

“And loans can’t be our long-term solution. Because loans aren’t bad only for students; they’re bad for the people they’ll serve. Students make career choices based on their debt load. Graduates who want to serve in underserved communities might not be able to make that choice. Their debt might win out.”

Perman said patients also want to want to be cared for by professionals who look like them—racially, ethnically, culturally, socioeconomically. “Can we really say that our programs are accessible to all students—regardless of wealth? I don’t think we can,” he said. So affordability guidelines and assistance will be part of UMB’s 2017-2021 strategic plan, which will build on the glowing Middle States reaccreditation report UMB received recently.

Perman also mentioned gains UMB made in diversity — “I know we are strong not despite our diversity but because of it” — and “clearing pathways” to career advancement. He praised the services the School of Dentistry is providing in Carroll and Frederick counties, what the School of Nursing is accomplishing with the Governor’s Wellmobile in Prince George’s and Montgomery counties, a physician assistant partnership with Anne Arundel Community College County that is being expanded to the Eastern Shore. “We’re meeting students where they are,” Perman said.

He lauded the many researchers at UMB who are doing extraordinary work. Among them:

“I won’t pretend that there isn’t a lot to figure out in terms of how we best operationalize this legislation by Oct. 1,” Perman said. “But … I’m excited about the future, and I want to thank my boss, Chancellor Bob Caret, for his powerful leadership and support.”

Perman recalled an overflow crowd of 340 that filled the Southern Management Corporation Campus Center ballrooms in March to express its views about Senate Bill 1052, speaking out for UMB’s independence.

There, Human Resources’ Patti Hoffmann said, “UMB has heart. You feel it every day, you see it everywhere we go, and I hope we don’t lose the heart we have.”

The full transcript of the State of the University Address is available.