The occasions were festive, yet in part bittersweet, as the University of Maryland, Baltimore (UMB) Community Engagement Center celebrated the holidays with neighbors in West Baltimore.

On Dec. 13 at the monthly luncheon, some grew teary-eyed as residents bid farewell to UMB President Jay A. Perman, MD, who launched the center four years ago and in October presided at ceremonies to expand its footprint. Perman will become chancellor of the University System of Maryland on Jan. 6. 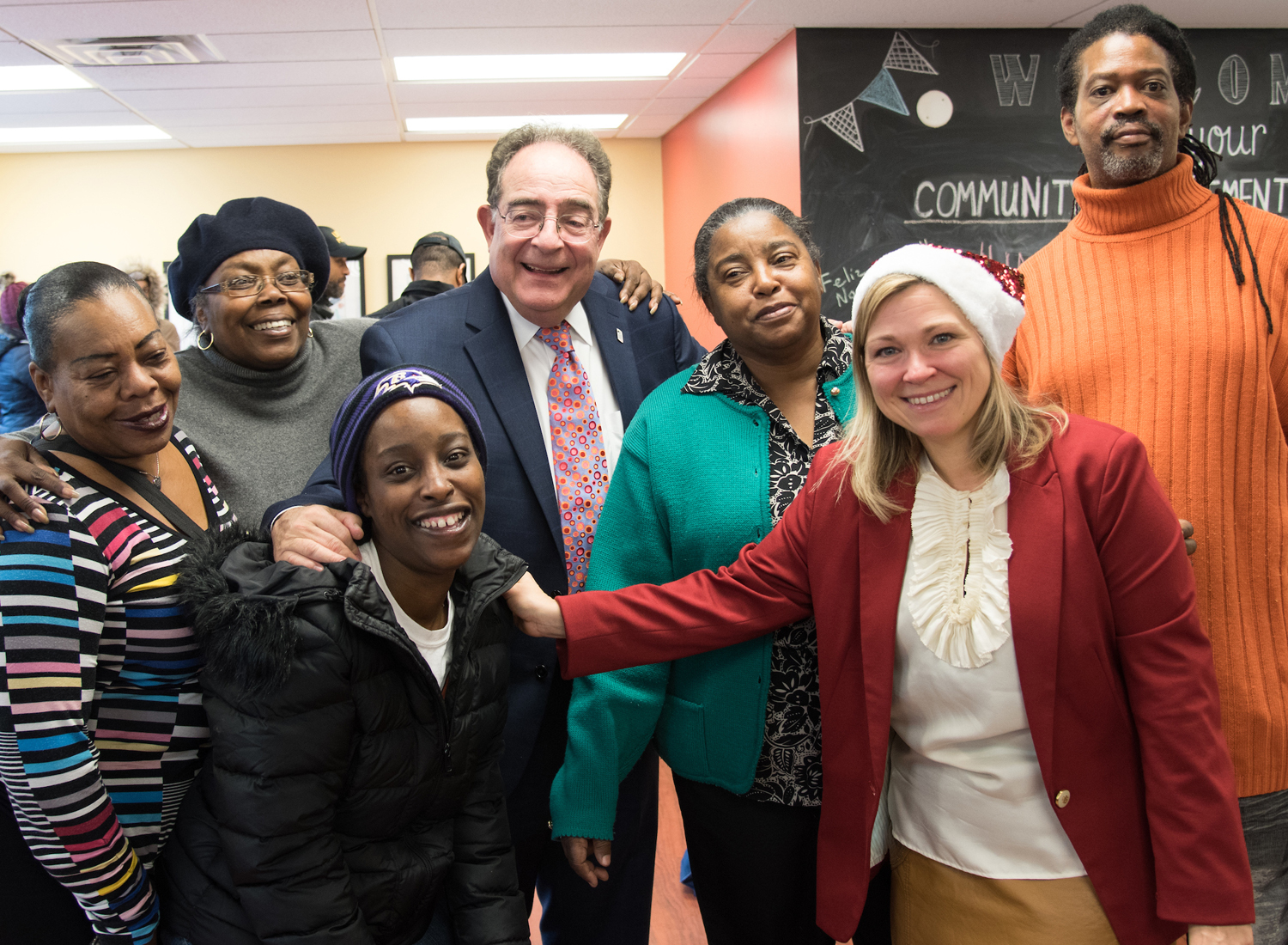 On Dec. 14 and during the previous weekend, neighbors flocked to the CEC to get much of their holiday shopping done. Thanks to a partnership between UMB and Foundry Church, the CEC was transformed into a Christmas Store on two Saturdays, giving West Baltimore residents the opportunity to purchase brand new toys at a deep discount.

Once again, the center has helped to brighten the lives of neighborhood youth, from teens to toddlers. Among the guests at the holiday luncheon were two officers of the UMB Police Department who are active in the UMB Police Athletic/Activities League (PAL) program, based at the center. And the guests included children, such as neighbor Tiffany Pearson’s daughter, Skylah, 6.

Perman’s affinity for the youngsters is not lost on the neighbors. “He especially loves the children,” said Dotie Page, a member of the center’s advisory board who has come to know Perman, a pediatrician, in working closely with the center’s staff and leaders of the UMB Office of Community Engagement (OCE).

It was Page who hugged a tearful Ashley Valis, MSW, executive director of strategic initiatives and community engagement at OCE. Page and Valis stood to begin a period of farewells during the luncheon.

“Dr. Perman is passionate about expanding opportunity to everyone,” Valis told the crowd, which included many members of the Southwest Partnership, a group of seven neighbhorhoods and anchor institutions in which Perman, Valis, and others at OCE and the UM BioPark have played formative roles.

The center has become a hub and will take on added importance after a planned relocation to a larger building that is undergoing renovation at 16 S. Poppleton St.

“Now that he's going to be the chancellor,” Valis said, “other colleges and universities around the state might want to look to see what we've built here and replicate that in their communities.”

Perman was greeted with warm applause as he said, “I want to re-emphasize: “This is not goodbye.” He told the crowd to think of him as being one flight up.

“I came to thank you, and I mean that from the bottom of my heart,” he said. “Thank you for letting us be your neighbors.”

Perman made a reference to students in UMB’s schools of law, social work, nursing, pharmacy, dentistry, medicine, and the Graduate School who are involved at the center through their curriculum or in various interprofessional activities. “You allow us to better educate the professionals whom we have a responsibility to educate so that they become better at treating and serving everybody,” he said.

“We as a well-resourced institution have come to understand our responsibilities to neighbors,” he said. “And all of our neighbors in this room -- and beyond this room --have been gracious in giving us a chance and welcoming us, telling us what you would like us to do, telling us when we do it wrong, telling us how to do it better. And we're grateful for that.”

Among the luncheon guests were Edith Gilliard-Canty, president of the Franklin Square Community Association, and Scott Kashnow, a Franklin Square resident who is Southwest Partnership secretary. The partnership took shape in meetings that Perman hosted in the president’s boardroom, and she pointed out that Perman “played a big part in it.”

“I want to thank him and let him know we appreciate him,” commented Gilliard-Canty, who was chatting with Page as the luncheon drew to a close.  “He saw a vision in all seven communities coming together. He was able to see the needs of the community and bring that to fruition.”

Page commented on the resulting relationships. “He brought all the communities together. We know each other.”

The luncheon provided even more opportunities for people to mingle, from a buffet of shrimp and grits to posing for a photograph with Santa, courtesy of Amerigroup. Others were delighted with the offer of a $20 gift certificate provided by Santa Claus Anonymous. As Valis told the crowd, there’s always a need for that last-minute gift.

Likely some of the parents and grandparents in attendance has already completed their shopping, thanks to the center’s Christmas store, which has been an annual tradition for the past six years. From Barbie dolls and PAW Patrol stuffed animals to Legos and sports equipment there was a gift for every child, at a cost of only $1-to-$5 each (with the exception of a few bigger items like a bicycle that sold for a little more).

The store has become so popular among neighbors that a line starts forming outside of the CEC hours before its opening. Lindsay Ferguson, the director of operations for Foundry Church, says the store is so popular because it allows parents and guardians the opportunity to pick out the perfect gift for their loved ones rather than having them come from anonymous donors.

(Read more in The Baltimore Sun.)

“Once parents ask for help, a lot of times they get shoved aside and the donors kind of take over," she said. “We wanted the parents to be the heroes of Christmas.”

All of the toys in the store were donated by members of the UMB and Foundry Church communities. The profits made from the first Saturday were used to purchase additional toys and anything left over was donated to local youth groups.