The Lion Brothers Building, once an abandoned embroidery factory, now features a sleek, modern space designed to attract startup entrepreneurs seeking a place to develop and grow their business ideas. And it’s not just for students, according to UMB President Jay A. Perman, MD. “This is truly a community space where students, faculty, staff, alumni, and entrepreneurs — inside and outside the University and the University System — can work shoulder to shoulder on the next big thing or the next small thing that can make a big difference,” he said to the crowd of about 150 that attended the launch.

The innovation center, dubbed the Grid, an acronym for Graduate Research Innovation District, will have on-site experts, including an intellectual property law clinic staffed by a University of Maryland Francis King Carey School of Law professor and a Maryland Small Business Development Center where budding entrepreneurs can receive advice and support for their business ventures.

The space also will be home to educational opportunities such as workshops and a new degree program in health and social innovation, whose students will be able to concentrate in areas like life sciences, user experience, or science communication. Jenny Owens, ScD, MS, faculty executive director for the GRID, said the opening of the new space feels wonderful. “The building has been under construction since the summer and the degree program we’ve been working on for a year, so it’s a big day for us,” she said with a satisfied smile.

"What you see here today is the opening of a facility that represents the future,” said UMCP President Wallace D. Loh, PhD, JD.  “We’re no longer just research universities. We are research and innovate universities.”

Christian Kinney, a graduate school student working on a PhD in genetics, is a future innovator. As a newly chosen President’s Entrepreneurial Fellow, he’s been working with UM Ventures to have an invention patented. Kinney said he likes the open floor plan of the space, but more importantly he likes the planning he’ll be able to do with like-minded entrepreneurs. “I think this will be really beneficial,” he said. “I can talk with other entrepreneurs here, people who’ve already been there and done all this, as well as people who are in my shoes just starting out.” 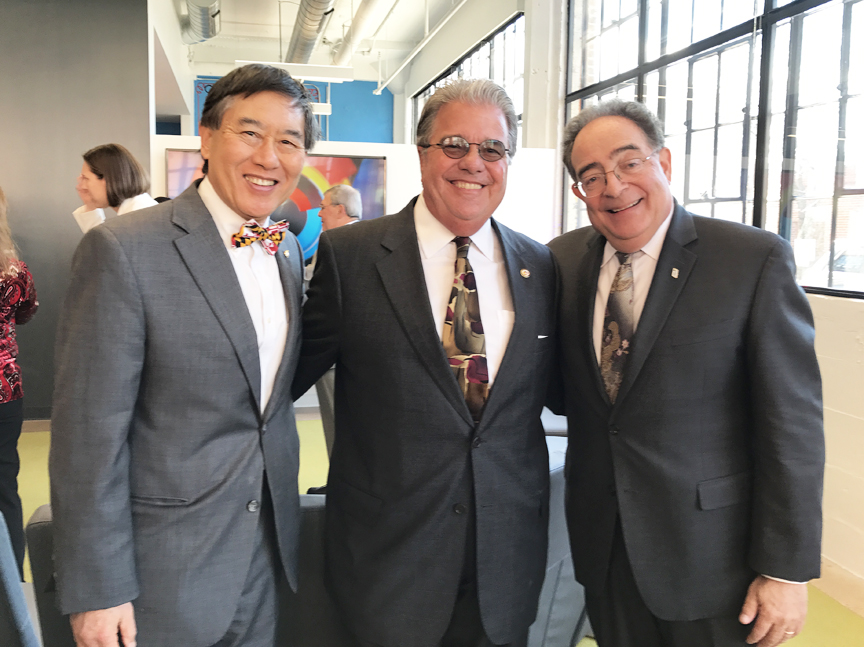 Perman said the GRID is a way to connect people, ideas, and universities. “It’s a way to connect our institutions — because this is truly a system-wide space, and everyone in the system will make it what it’s meant to be.”

University System of Maryland Chancellor Robert L. Caret, PhD, agreed. “Today we see an example of a great partnership between two of our major research universities in the system and the state,” he said.

“[Both universities] will continue to do what they do first for the students that we serve, but also for the economic vitality of the state as a whole.”

The GRID was a natural next step for the UM Ventures partnership, which in just five years has doubled the number of technologies licensed to commercial partners and launched 35 new startup companies in the last two years.

Another important aspect of UM Ventures 2.0 is funding. The Baltimore Fund, a part of the University of Maryland Strategic Partnership: MPowering the State, will provide rent subsidies to companies affiliated with any system institution, including Morgan State and St. Mary’s College. The funding, which can subsidize rent for up to a year, is intended to build upon a growing urban culture of entrepreneurship.

UM Ventures 2.0 is about innovation and entrepreneurship. It’s about connecting makers, doers, and creators with one another and providing the resources to make their dreams a reality.

Albert Zhou, an MDPhd candidate, is studying epidemiology and human genetics. He plans to make use of the GRID to pursue a business idea. “Having a place like this and having a place where you can develop your ideas is wonderful,” he said.