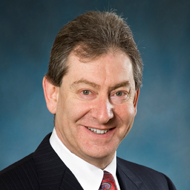 Stephen N. Davis was named the University of Maryland, Baltimore's (UMB) first vice president of clinical and translational science in February 2017, expanding on his previous roles at the University.

He is the Dr. Theodore E. Woodward Chair of the Department of Medicine in the School of Medicine, a founding member of the UMB Clinical Translational Sciences Institute, and since 2010 he has served as director of the General Clinical Research Center, which provides vital resources to UMB’s entire clinical research community. As director, he has grown the center’s research base, increasing the number and scope of projects sponsored by federal agencies and corporations alike.

An internationally recognized endocrinologist and research scientist, Davis chairs the School of Medicine’s largest department, with more than 300 full-time faculty members of physicians and scientists. He has devoted his career to treating adults with diabetes and metabolic disorders as well as studying the biological basis of certain diabetes-related complications.

Davis currently leads research projects totaling $10 million as principal investigator for the Davis research laboratory. He has identified promising new treatments and interventions that counteract these mechanisms and stimulate the body’s ability to defend itself against hypoglycemia. He also explores the mechanisms that cause increased heart attacks and strokes in diabetic patients.

Born in the United Kingdom, Davis has been recognized with many distinguished awards throughout his career, including the Novartis Award for Diabetes Research, considered the highest honor in that field of research. He has published nearly 200 articles, reviews, and textbook chapters in premier scientific journals.