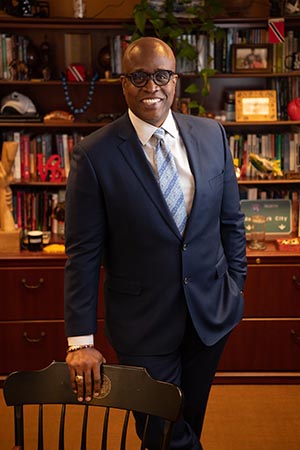 Dr. Ward was named provost and executive vice president of the University of Maryland, Baltimore (UMB) in October 2021 after serving in interim roles since January 2020, when he also was named dean of the Graduate School.

These are the latest in a series of upward moves for Dr. Ward at UMB. He was promoted to senior vice president for operations and institutional effectiveness in January 2018. In that role , he served as UMB’s chief operating officer, directing a portfolio of departments and initiatives that promote institutional effectiveness and assure accountability including human resources, strategic planning, enterprise risk management, and institutional accreditation. In addition, he oversaw areas that promote University compliance and transparency, including the offices of research integrity, conflict of interest, human research protections, and education and equal access. On the academic side, Ward is dean of the Graduate School after serving as vice dean, where he had responsibility for building an array of graduate programs that are self-sustaining and responsive to evolving needs of the health and human services workforce in the state.

Dr. Ward holds an associate’s degree in data processing/computer programming from Kingsborough Community College, a bachelor’s degree in government and a master’s in public administration, both from John Jay College of Criminal Justice. He holds two law degrees: a Doctor of Law degree from New York Law School, and a Master of Science in Law (cybersecurity law) from the Francis King Carey School of Law at UMB. Dr. Ward also holds a Doctor of Education degree (with distinction) in higher education management from the University of Pennsylvania. Dr. Ward has been teaching on-site, online, and in a blended environment since 2004 and has taught graduate courses in ethics, the history of higher education, leadership and organizational behavior, legal issues in higher education policy, and cybersecurity policy, among others.

Back to Administrative Officers