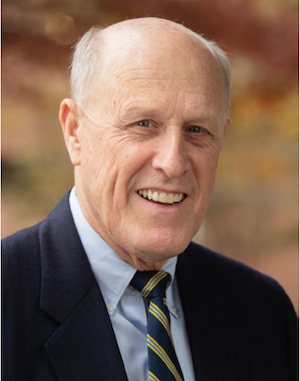 Bruce E. Jarrell, MD, FACS, was selected as the seventh president of the University of Maryland, Baltimore (UMB) on Sept. 10, 2020, after serving as interim president for eight months. During the interim period, Dr. Jarrell guided the University’s efforts to cope with the COVID-19 pandemic once it unfolded in March 2020.

The appointment as president was the latest in a long line of upward moves by Dr. Jarrell at UMB, where he has served as chief academic and research officer, senior vice president, executive vice president, and dean of the Graduate School.

Named chief academic and research officer and senior vice president in April 2012, Dr. Jarrell served as the focal point for all academic matters at UMB and was responsible for facilitating the research mission of the University by working closely with UMB administrators, deans, research leadership of the schools, and others. Through and with the deans and vice presidents, Dr. Jarrell worked to further the University’s core values among faculty, staff, and students in the leadership, management, and promotion of the institution’s education, research, clinical, and community engagement agendas.

Dr. Jarrell was named executive vice president and provost in December 2017, expanding his already wide-ranging duties. In this role, Dr. Jarrell had the authority to act on behalf of the president in a variety of matters and settings. Dr. Jarrell, who was dean of the Graduate School, also oversaw many of the University’s most critical institutional relationships, such as the University of Maryland Strategic Partnership: MPowering the State, UMB’s innovative and structured collaboration with the University of Maryland, College Park, and worked to build and maintain academic interactions with all USM institutions.

Dr. Jarrell arrived at UMB in 1997 as chair of the University of Maryland School of Medicine’s (UMSOM) Department of Surgery. He expanded UMSOM’s surgical programs and developed innovative research studies and clinical trials, leading to its ranking as 11th nationally in total research funding from the National Institutes of Health. In 2003, he moved to the UMSOM Dean’s Office, where he served as executive vice dean, directing the school’s education and research enterprises.

Dr. Jarrell was born and raised in Caroline County on Maryland’s Eastern Shore. He received his bachelor’s degree in chemical engineering from the University of Delaware and his medical degree from Jefferson Medical College in Philadelphia. He completed a general surgical residency and renal transplantation fellowship at the Medical College of Virginia and held faculty positions at Jefferson, where he performed kidney and liver transplantation and hepatobiliary surgery for 10 years, and the University of Arizona, where he was a professor and chair of its Department of Surgery.

Dr. Jarrell is an accomplished metalsmith and a member of the Blacksmith Guild of Central Maryland. Among his creations are a mace holder he made for UMSOM in 2006, a mace holder he crafted for Perman’s inauguration as UMB president in 2010, and the Davidge Elm tree window art that he and Ukrainian blacksmith Anatoliy Rudik created in 2012 that was installed in the SMC Campus Center. Jarrell has written a number of books, including the 2021 edition of the popular textbook “NMS Surgery” and the “NMS Surgery Casebook.”