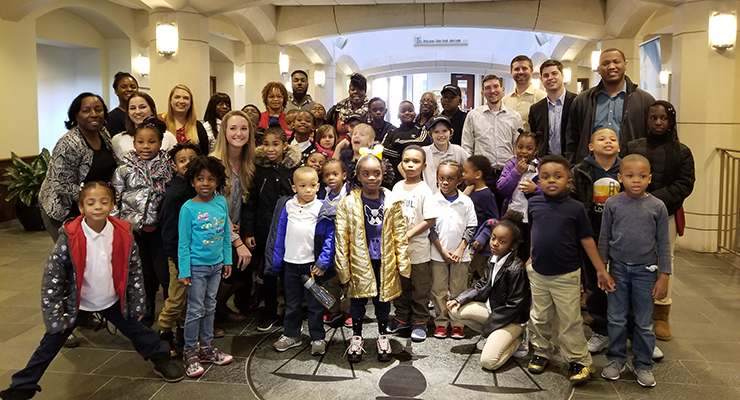 Other law students involved in the activity included third-year student Courtney Watkins as Gold’s mom Curl E. Locks, third-year student Ashley Fellona as the judge, third-year student Tyler Brown as an advocate for Gold, and third-year student Andrew Nagel as an attorney for the Bear Family. The children were split into three separate juries of approximately 10 students each, all of whom got a chance to sit in the jury box. One jury found Gold guilty of having bad manners, but the other two juries were more sympathetic to the defendant, finding her not guilty.

The exercise in career exposure allowed our K-12 community partners an out-of-classroom learning experience that many of our partner schools are not funded to provide. These types of experiences are well-documented to have positive outcomes for participating students and are among the most cost-effective ways for us to engage our community partners.

The Office of Community Engagement challenges student groups, staff, and faculty across the UMB campus to develop creative ways to share their chosen career paths with our K-12 partners. If you, your student organization, or department would like to propose such an activity or for assistance in developing creative ways to engage our community partners, please contact Brian Sturdivant, MSW, director of strategic initiatives and community partnerships, at bsturdivant@umaryland.edu or 410-706-1678.