In May, University of Maryland, Baltimore (UMB) President Jay A. Perman, MD, hosted an inaugural Global Health Summit, where teams of international researchers and clinicians met to discuss their past work and future plans. He referred to the participants from 10 countries being “all part of one big UMB family working to advance health, well-being, and justice on a global scale.”

At his quarterly Q&A session on Sept. 17, Perman said it was time for him to return the family favor, discussing his planned visit with those UMB members working in Africa. Other University leaders, Center for Global Education Initiatives representatives, and Institute of Human Virology personnel have joined Perman in the weeklong trip to Zambia and Botswana that began the weekend of Sept. 21. 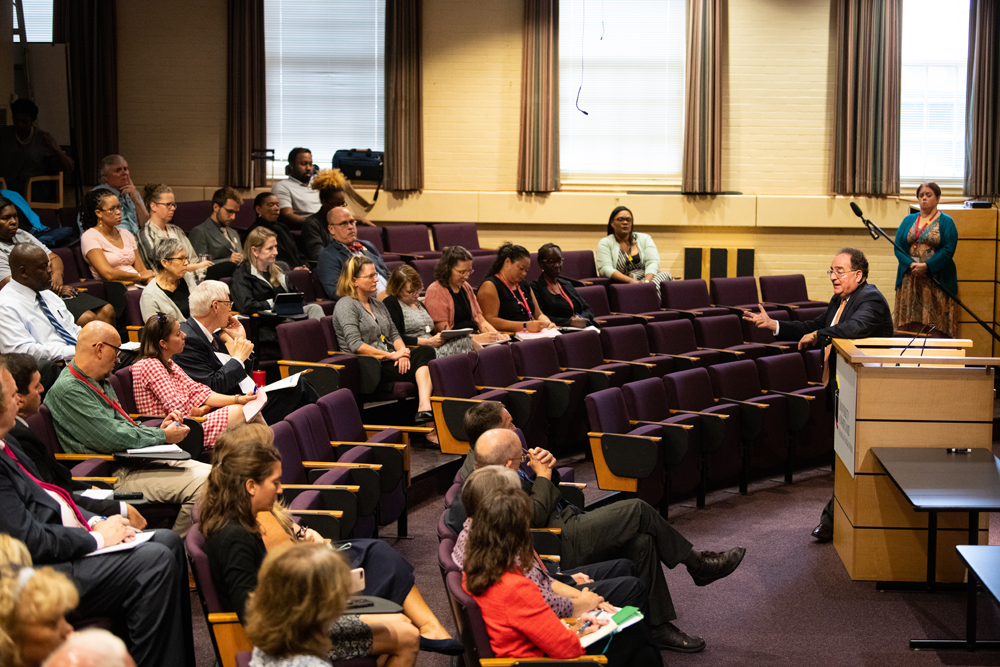 The group’s itinerary includes meetings with University of Zambia and University of Botswana officials to explore and expand academic partnerships; visits to hospitals, clinics, and community sites; the first UMB “Global Meet-Up” web broadcast; and more.

“I believe we need to engage with the people in our UMB family in Africa and we need to thank them for their great work,” Perman told a crowd of 100-plus at the School of Social Work Auditorium. “I’ll report back to the University community here after we visit with the roughly 800 personnel in Africa. They are an important part of our family.”

Perman said UMB-affiliated programs in countries such as Zambia, Botswana, Tanzania, Nigeria, Kenya, Malawi, and Rwanda are doing important work on the prevention and treatment of infectious diseases, particularly HIV.

“Our programs have benefited people with regard to infectious disease and other health and social needs in these countries,” Perman said. “The programs also have provided economic development in terms of jobs, and they’ve allowed our faculty members, students, and staff to learn and contribute.”

He said UMB’s investments in overseas programs and visits are worth it because the University’s participants gain new perspectives on health care problems and ways to solve them.

“Sometimes I’m asked by well-meaning people in the United States: ‘Why do you have to be supportive of issues elsewhere?’ Their argument is: ‘Don’t we have enough problems here? Why do we need to take our resources, apply for grants, and go over there?’

“Well, I have personally seen it again and again that when our faculty, students, and staff spend some time away, they come back with solutions to challenges here that we would have never thought of. We invest so much elsewhere because it’s a win-win.”

Other topics discussed in the 50-minute Q&A session included the UMB task force on women’s issues and the fledgling President’s Council for Women, the creation of UMB’s Center to Prevent Gun Violence, and efforts to train more people at UMB on the use of naloxone.

The women’s task force, chaired by School of Pharmacy Dean Natalie D. Eddington, PhD, FAAPS, FCP, was asked to independently examine issues of sexual harassment and discrimination at UMB as well as Title IX education and compliance. The group has presented its recommendations to Perman in outline form and will deliver its full report in October.

“The report will dovetail nicely with the President’s Council for Women,” said Perman, who added that the council will consist of 30 to 35 members and include representation from all UMB schools and various administrative units. “I want to make sure that UMB has a platform for women to be successful and free from harassment. But it’s about more than Title IX and sexual harassment. It’s about equity in regard to compensation. It’s about appropriate policies for promotion. And it’s about other matters that are concerning to women, areas where they’d like our institution to do better.

“That council will be a standing body,” he added. “It will create bylaws, terms, et cetera, and it will get started on the task force’s recommendations. I hope and expect that the President’s Council for Women will be at UMB forever.”

“Dean Tobin is doing an inventory first, which is the right thing to do,” Perman said. “Once he does that, he will come back with more specifics on how to organize this initiative. There have been many offers to help us in the formation of the center.”

Regarding naloxone, a drug that reverses the effects of opioid overdose, UMB Police Department Chief Alice K. Cary, MS, said that all of her police officers are trained in its use and that training would be expanded to the security officers stationed inside buildings on campus.

“We want to get everyone on board, even citizens,” Cary said. “Having the availability of that drug hopefully will reduce some of the opioid deaths. Part of that is getting the community educated about naloxone, its immediate effects, and what to look for.”