A hush fell over the full audience at Black Cherry Puppet Theater as children from the West Baltimore community readied themselves to share the stage with police officers from the University of Maryland, Baltimore (UMB). 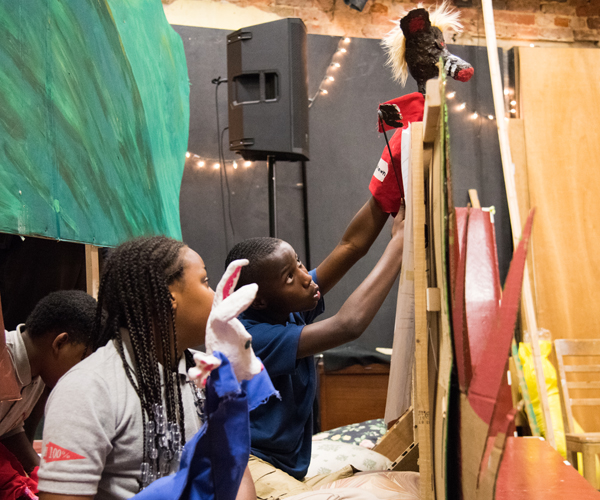 The PAL kids practice with their puppets in their final rehearsal at the Black Cherry Puppet Theater.

Hazel Lewis, a corporal on the UMB Police Force and the co-coordinator of UMB’s Police Athletic/Activities League (PAL) program, stood in the spotlight to introduce the show.

“These kids have done some hard work here,” she explained to the audience. Lewis saw firsthand just how much hard work the children put into bringing the story, How Coyote Got His Song, to life with a puppet show.

Their performance was the final product of a 10-session puppeteering workshop put on by the Black Cherry Puppet Theater and facilitated by the PAL program at the UMB Community Engagement Center (CEC). UMB police officers worked alongside the youngsters throughout the workshop, providing hands-on mentorship and guidance to prepare for the show. As a team, they created a story board, assigned parts, practiced their lines, and hand-made their own puppets.

The workshop demonstrated the fundamental message behind the PAL program, which is to foster strong relationships and create a foundation of trust between police officers and children in the communities they protect. PAL is a national after-school program that was launched at UMB in February 2018 and is one of only two programs in the nation offered at a university.

“I have to say I’m really excited about working with the PAL program and engaging police officers in this kind of programming,” said Michael Lamason, the Black Cherry Puppet Theater’s executive director and coordinator of the puppet workshop.

UMB’s PAL was able to bring on Lamason as an artist-in-residence thanks to a grant from the National PAL as well as generous donations from two private donors. However, the idea to have the PAL program partner with a local puppet theater came from Kelly Quinn, PhD, coordinator of the CEC. Quinn says the two were an obvious pairing because the theater is located a few blocks away from the CEC in the Hollins Market neighborhood, allowing the children to learn new skills in an easily accessible and interactive environment.

“Our children really love to make things,” Quinn said. “And in this workshop, they make their rod puppets, embody a character, and read their lines out loud, so to me, it was an exercise of having fun and reading comprehension.”

The youngsters took their final bows at the performance on Sept. 13, but it’s not the final curtain call for this partnership between PAL and the Black Cherry Puppet Theater. This puppeteering workshop is only the beginning of a mutually beneficial relationship. The Black Cherry Puppet Theater will provide a platform for neighborhood children to exercise their creativity and public speaking skills through performance. Meanwhile, the children will be drawing in new audiences and spreading awareness of the theater.

Quinn and Lamason also have expressed an interest in using the newfound partnership between PAL and the Black Cherry Puppet Theater to help strengthen the West Baltimore neighborhood by writing original scripts about issues in the community.

“It would be a way for us to address social needs and the public health needs of the community through storytelling with our young children,” Quinn said.

The Black Cherry Puppet Theater plans to return to the CEC in October for another PAL puppeteering workshop.