Asking the right questions is essential to maximizing an institution’s potential in diversity and inclusion. That was among the messages conveyed by Marc A. Nivet, EdD, MBA, as he kicked off the Diversity Advisory Council Speaker Series at the University of Maryland, Baltimore (UMB) on Sept. 28.

Nivet, executive vice president for institutional advancement at the University of Texas Southwestern Medical Center and former chief diversity officer for the Association of American Medical Colleges, spoke for nearly an hour and then answered questions in “Diversity 3.0: From Fairness to Excellence.” 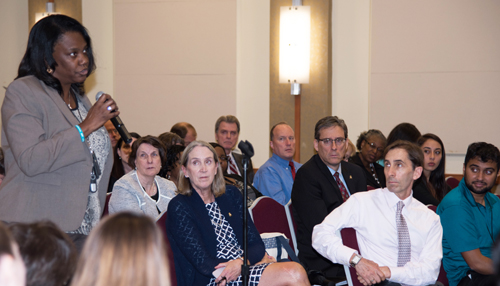 SON Assistant Professor Yolanda Ogbolu, PhD ‘11, MS ‘05, BSN ’04, CRNP-Neonatal, director of the Office of Global Health, is among those who asked questions.

He pointed out that Motorola engineer Martin Cooper invented the cell phone in 1973 when he asked the right question. Told to create the next generation of car phone, Cooper “realized at that time you had to call a place — a home, office, pay phone,” Nivet said. “Why don’t we call a person? Cooper wondered. All the technology existed to do it, but no one had asked the right question until him.”

Nivet urged the 150 or so assembled at the SMC Campus Center to come up with the right questions in diversity matters as well. While he praised UMB’s “phenomenal” pipeline programs that guide West Baltimore youths into future health care careers, he said more could be done.

“How much does this institution source on food each year?” Nivet asked. Told millions of dollars, Nivet asked, “How far is the nearest food desert? Blocks away. What if you went to your food source, with whom you spend millions a year, the next time you went to bid and say ‘We want to have a joint partnership on a food desert eradication program.‘ Which company is going to say no, we don’t want to do that? We don’t need your multimillion-dollar contract.”

The same could be done with technology, Nivet said. If a computer company wants to keep your account, have it supply modern equipment to schools in the area. “Why is there a child anywhere within five miles of this university who doesn’t have high-speed internet access or a laptop, or their school doesn’t have up-to-date technology?” Nivet said. “Tell the technology company, ‘We’ll put up $100,000 and we need you to put up $1 million.’ Which company is going to say no to that? The reason that doesn’t exist is because no one has asked the right question.”

In his previous role as chief diversity officer for the Association of American Medical Colleges (AAMC), Nivet was responsible for the AAMC’s vision and leadership on issues of community engagement, diversity, and health equity at medical schools and teaching hospitals across the U.S. and Canada. “I like to think I effectively agitate,” he said with a smile.

Nivet, who started his UT Southwestern post on Sept. 1, has spent over 20 years in academic medicine and has lectured around the country, finding many similarities. And despite gains made in diversity and equality, he said much work still remains.

“I’ve been to 137 colleges and universities and all care about this work,” he said. “They have quality leadership like you have here with Dr. Perman and direct day-to-day responsibility of the diversity board. There’s investment. But despite all that investment, [nationally] we had fewer black men in the first-year medical school class in 2014 than we did in 1978.”

At his morning presentation — one of four Nivet did at UMB on Sept. 28 for groups ranging from students, members of the Diversity Advisory Council, and UMB’s deans and vice presidents — he said getting comfortable with being uncomfortable was a necessity. “There’s nothing magical or inherently good about diversity,” he said, admitting that was strange coming from a diversity officer. “If you don’t believe me turn on CNN and see what happens when you smash different religions together, different cultures together, different people together around the world and create artificial connections.

“Every one of you has your own definition of diversity,” he said, mentioning it can be a minority issue, gender, LGBT, or disability issue. “But diversity means nothing more than difference. We put on this word all these different meanings. That difference doesn’t matter unless you have a culture of inclusion. Inclusion is the necessary fuel that animates the diversity.”

In his introduction, UMB President Jay A. Perman, MD, recalled an AAMC Diversity 3.0 event Nivet spoke at several years ago in Washington, D.C. “I knew immediately that he had something very important to teach us,” Perman said. “I was drawn to the way Dr. Nivet framed the case for moving diversity from our periphery to our core and that … this is the only way we’ll achieve institutional excellence.”

Equating diversity to a software program, Nivet said Diversity 1.0 includes a social justice movement that seeks fairness and accessibility for women and minorities. Diversity 2.0 turns to cultural competency, population parity, and a focus on recruitment and retention. “Education is better when we are diverse. When we have people with conflicting views. Sure it’s great to give a kid an opportunity, but really the thinking is the reason we’re doing this is because it makes us better. That was Diversity 2.0.”

Diversity 3.0 moves to a broader definition of diversity, moving it from the periphery to the core, with a focus on an institution thriving. “It’s when the shift happens that you realize we can’t be an excellent institution unless we’re diverse and inclusive.”

Perman began the presentation by saluting UMB’s Diversity Advisory Council, which he formed shortly after his arrival in 2010. He applauded the launch of the DAC Speaker Series pointing out UMB has had many compelling discussions in recent years on diversity, equity, and inclusion. “We were eager to bring in others — experts who can inform our own debate, who can share the best scholarship in diversity, and who will contribute perspectives that lend nuance to our understanding and depth to our dialogue.”