“Just as you cannot treat a disease without a diagnosis, you certainly cannot fully understand our current society without understanding our history that got us here.” That’s how University of Maryland, Baltimore (UMB) President Bruce E. Jarrell, MD, FACS, explained the urgency and excitement surrounding the presentation of poet, writer, and teacher Clint Smith, PhD, in the Diversity Advisory Council’s Virtual Diversity Speaker Series.

In his presentation to the UMB audience, “History Reconsidered,” Smith challenged viewers to examine the often-hidden realities not taught in our schools about the history of racism in the U.S. and how that history has shaped nearly every part of our lives today. 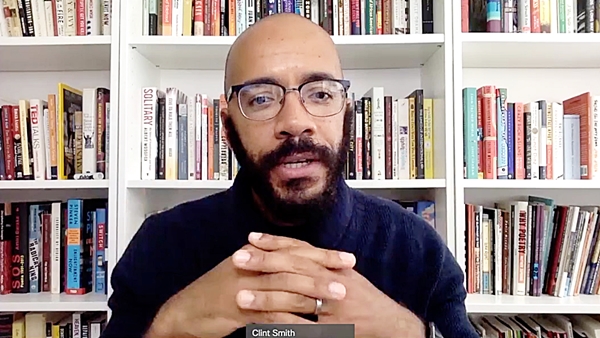 To be sure, Smith’s long list of accomplishments made any introduction to the audience of UMB students and employees a challenge. First, there are the awards: National Poetry Slam champion, recipient of the Jerome J. Shestack Prize from the American Poetry Review, named to Forbes magazine’s 30 Under 30 list and Ebony magazine’s Power 100 list, and many more.

Those awards are only a sign of the impact of Smith’s writing — poetry and prose. When Smith signed on as the newest writer at The Atlantic this summer, editor in chief Jeffrey Goldberg said, “Clint has emerged in recent years as a top-tier commentator, essayist, and poet.” And he called Smith’s writing “elegant, penetrating, and morally urgent.”

That moral urgency has been displayed in many venues. On the PBS News Hour, Smith read his poem, “Letter to Five of the Presidents Who Owned Slaves,” an effort to “complicate the narrative around who they were.” His first full-length collection of poetry, Counting Descent, won the 2017 Literary Award for Best Poetry Book from the Black Caucus of the American Library Association and was a finalist for an NAACP Image Award.

In his two TED Talks, seen collectively by more than 7 million viewers, Smith explored the way young lives are shaped by a culture founded in and perpetuated by racism. In “How to Raise a Black Son in America,” he recalls how playing with super soakers one evening brought about “the talk” from his father, and the hurt he felt on being told “you can’t act the same as your white friends.”

In his other TED Talk, “The Danger of Silence,” Smith reminds us of Martin Luther King’s warning that we’ll remember less the deeds of our enemies than the silence of our friends and explores the role of silence as the “residue of fear.”

Beyond his poetry and spoken word successes, Smith is widely known for his many articles and essays in The New York Times, The New Republic, Paris Review, and many other publications, like “Ralph Ellison’s Invisible Man as a Parable for Today in The New Yorker,” or, “Becoming a Parent in the Age of Black Lives Matter” in The Atlantic.

His newest book, How the Word Is Passed, has just been released. It examines seven places in America built by enslaved people, from Monticello to Angola State Prison, and looks at how the legacy of racism is regarded and reflected in each.