University of Maryland, Baltimore (UMB) officials recently shared with Montgomery County Executive Marc Elrich some of the lessons learned over 15 years while developing the UM BioPark  from a collection of startups on 4.7 acres in West Baltimore into an economic tour de force. 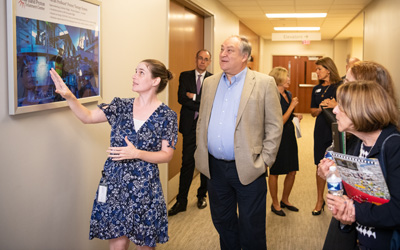 The 14-acre BioPark is now home to dozens of leading biomedical companies and employs more than 1,000 people. The multi-tenant space, which is Baltimore’s biggest biotech cluster, has been creating a buzz in the bioservice sector and the county executive came to see the thriving space for himself.

Elrich, who is contemplating a similar project in Montgomery County, toured the BioPark and was impressed. “I like the scope and the scale of the projects here,” he said. “There’s an amazing accumulation of intellectual capital and investment programs that seem to have attracted a really interesting group of entrepreneurs and scientists.”

University President Jay A. Perman, MD, tweeted after the meeting, “Never get tired of talking up our @umbiopark. Today, I told the good news to @MontgomeryCoMD Exec @Marc_Elrich. He met w @UMBaltimore leaders & anchor tenant@pharmaron, 1 of the world’s fastest growing #biotech companies. Pharmaron is expanding its BioPark space, jobs & revenue.”

The county executive’s tour included a stop at the BioPark office of Beijing-based Pharmaron, a global leader in life science research and development. One of the world’s fastest-growing biotech companies and one of the BioPark’s many success stories, Pharmaron is expanding its revenues, employment, and space in the BioPark. It’s also expanding collaboration with the University of Maryland School of Medicine’s (UMSOM) Center for Vaccine Development and Global Health.

Pharmaron senior vice president of strategy Ashok Tehim credits part of that growth to two things: proximity and partnership. “A lot of times people ask, ‘Why Maryland?’ My answer is very simple,” he told the county executive. “If you want to be in close proximity to the FDA, NIH, the National Cancer Institute, and a leading medical center at the University of Maryland, this is the place to be.”

The good news about the BioPark doesn’t end with Pharmaron’s success. There’s also the 10-story, 300,000-square-foot tower, dubbed the Gateway Building, that will soon be built at the corner of Baltimore Street and Martin Luther King Boulevard that will double the tenant space in the BioPark with more labs and offices.

In April, news broke that BioPark tenant Paragon Bioservices would be acquired for $1.2 billion by Catalent, a New Jersey-based biologic drug manufacturer. Paragon is adding more employees at the BioPark as well as opening two new manufacturing facilities in Anne Arundel and Montgomery counties.

And then there’s Illumina, which WIRED magazine called the “Google” of genetic testing. In July, the DNA sequencing giant announced that it chose the BioPark as its first East Coast commercial location because of its proximity to UMSOM’s Institute for Genome Sciences.

“Even though we have Baltimore in our name,” Perman said, “we have a statewide mission, and that’s why I invited the county executive and his colleagues to Baltimore to see our BioPark.”