Patricia Brennan, PhD, RN, FAAN, FACMI, a pioneer in the development of information systems for patients, was ready to enjoy retirement when she was asked to join the National Library of Medicine (NLM) as its director two years ago, and she has not looked back since.

“I was well on my way to the lounge chair and the knitting club and then I took this job,” Brennan said during her keynote lecture Oct. 11 at the University of Maryland School of Nursing (UMSON) titled “Precision Health and the National Library of Medicine: From Accelerating Discovery to Improving Health and Well-Being.”

“Now, why would someone who was well on her way to nirvana move to Washington?” she asked. “Well, it’s a fabulous job. It’s an amazing place. But I control the biomedical knowledge of the world. So, by shaping the way we index, curate, distribute research …I am able to broaden the conversation from medicine to health.” 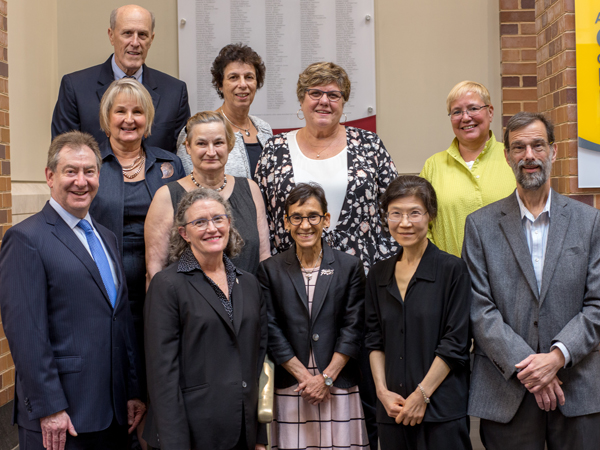 The NLM is the world’s largest biomedical library and the producer of digital information services used by scientists, health professionals, and members of the public worldwide. Brennan became its 19th director in August 2016.

The lecture centered around the concept of precision medicine, which Brennan described as an approach to patient care that allows providers to pursue treatments most likely to help patients based on the genetic understanding of  diseases.

Nurses play a critical role in broadening the conversation from precision medicine to precision health, said Brennan, a nurse herself.

“To transform precision medicine to precision health, we have to have patients as partners. We’re not going make them partners by giving them research papers to read,” Brennan added.

In introductory remarks, Mary J. Tooey, MLS, AHIP, FMLA, associate vice president for Academic Affairs, executive director of the HS/HSL, and director of the National Network of Libraries of Medicine, Southeastern/Atlantic Region, was excited about welcoming Brennan, calling her the HS/HSL’s unofficial “captain.”

“As a health sciences library, and a health sciences librarian, we think of the National Library of Medicine as the ‘mothership,’ and so I guess that means that Dr. Brennan is our leader, Captain Patty T. Kirk,” Tooey quipped. “I can't underscore the importance and great fortune of having the National Library of Medicine as the leader and partner of the important work of collecting, organizing, and making biomedical information available in whatever the format, print, digital, and certainly, data. The NLM articulates and sets strategic directions for our profession.”

“Patti Brennan came to the NLM a little more than two years ago, developed a new strategic plan with a cast of thousands, and has health sciences librarians and libraries casting themselves forward into new and exciting places — to boldly go where many had never considered going before. So, you can see why our library community is excited to have her here,” Tooey said.

Joining Tooey in her excitement about Brennan’s visit to UMSON was Eun-Shin Nahm, PhD'05, RN, FAAN, professor, and director, Nursing Informatics master's speciality, and co-director, Biology and Behavior Across the Lifespan organized research center. She introduced Brennan at the event, calling her “a visionary leader in health care informatics and my esteemed mentor.”

Since assuming her directorship, Brennan has positioned the NLM to be the hub of data science at the National Institutes of Health and a national and international leader in the field, Nahm said. “She spearheaded the development of a new strategic plan that envisions NLM as a platform for biomedical discovery and data-powered health," Nahm explained.

The NLM is committed to a national network of libraries of medicine made up of 7,000 institutions around the country that extend NLM’s reach “into everywhere and most importantly into the homes of those who need the health information that we have,” Brennan said. And it all began as a small bookshelf in a hospital in the 1830s, she noted.

“It has grown to touch every corner of the world and has shaped every biomedical discovery that has happened in the last 50 years,” Brennan said. “You can’t innovate, discover or peer [review] without us.”

The lecture was co-sponsored by the following entities:

“It also reflects our authentic commitment to interprofessional research, education, and practice. Given our commitment to the research enterprise, clinical excellence in public health, and to the education of the next generation of health professionals … we are precisely the configuration of institutions that can support the National Library of Medicine in realizing its inspiring mission of advancing human health and discovery," Kirschling said.

To view a video of the event, click here.