UMB Spring Fest ‘Shows What We Can Do Together’

Ten-year-old Sijay Brown’s eyes opened wide as she looked into the eyes of an eastern screech owl staring right back at her.

“I’ve never seen anything like it, never, ever,” Sijay said of the bird perched on the gloved arm of a naturalist from Scales & Tales, an environmental education program of the Maryland Park Service that provides people the opportunity to see live wildlife, mostly native to Maryland, up close and personal. She also marveled at the red-tailed hawk, tree frogs, box turtle, and king snake that were on display. (View a photo gallery.) 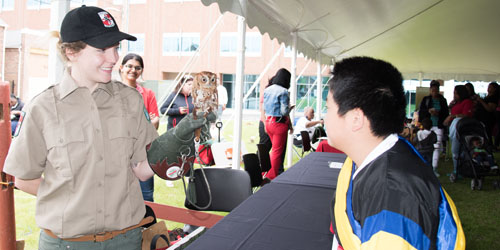 The encounter was just one of many enjoyed by more than 400 West Baltimore residents attending the University of Maryland, Baltimore's (UMB) Neighborhood Spring Festival on May 5 on the grassy lawn next to the University’s Community Engagement Center (CEC). The event, in its third year, is sponsored by the UMB Council for the Arts & Culture, of which Maryland First Lady Yumi Hogan is honorary chairperson, and UMB President Jay A. Perman, MD.

“We are so proud to be part of the West Baltimore community and as such, we bring our health services, our legal services, all the incredible know-how that we have at the University to our neighbors,” Perman said. “But every once in a while, it’s also important that we have a little fun together. So together with the First Lady of Maryland, Mrs. Yumi Hogan, she and I for the past three years have been putting a festival together where we bring in entertainment, good food, health services, just a lot of fun for a couple of hours, all of us together, out on this grassy area in our BioPark, and I am already looking forward to next year.”

While performances took place under a large tent outside, festival participants took advantage of various health screenings inside the CEC and in a mobile unit provided by the University of Maryland Medical Center.

Inside the CEC, 9-year-old London Coples took part in free dental screenings provided by students of the University of Maryland School of Dentistry.

“The lady said I take very good care of my teeth,” Coples reported of the assessment she was provided by third-year dental student Raman Kaur. “I’m really happy about that.”

The University of Maryland School of Social Work provided information on its B’more for Healthy Babies initiative, which aims to improve the health of infants and decrease rates of infant mortality.

Perman and Hogan also presented Community Schools Coordinator Heidi Stevens with a basket of toys and supplies to be used at the James McHenry Elementary/Middle School's Positive Behavior Intervention and Supports store that were purchased through donations by festival vendors. Students who display acts of good behavior receive vouchers to "shop" in the store to purchase toys.

It was Margert Wagner’s third year attending the festival.

“I think it’s a great idea to have something like this so that people can be aware of what the University has to offer,” said Wagner, who visits the CEC regularly to purchase fresh produce.

“It’s good to get the neighbors together to socialize and talk and meet new people, and to give the kids something positive to do,” added resident Deborah Randall.

“It brings the community together,” agreed Cynthia Poindexter, who attended the festival with her 4-year-old granddaughter, Carter. “And with UMB being a part of the Southwest Partnership, that shows a true partnership. It shows it’s not all talk.”

Resident Sierra Johnson added, “Things like this show that the University is not just about tearing things down but about building things up together. It’s a wonderful day to show what we can do together.”