Supporters from the University of Maryland, Baltimore (UMB) and beyond recently marked the accomplishments of 80 middle school students whose participation in the UMB CURE Scholars Program at such an early age has made them national pioneers.

UMB CURE was the first to start with students as young as middle school. Part of the National Cancer Institute’s CURE (Continuing Umbrella of Research Experiences), the initiative is supported by NCI’s Center to Reduce Cancer Health Disparities (CRCHD). The center now encourages others nationwide to emulate UMB’s program, and CRCHD Director Sanya Springfield, PhD, was in Baltimore to encourage students whom she has come to know personally. 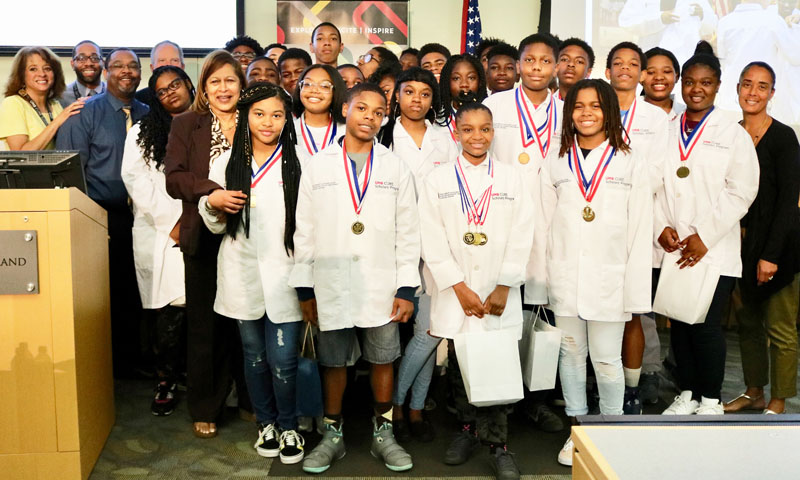 Sanya Springfield, PhD, director of the Center to Reduce Cancer Health Disparities, in the second row, left, stands with eighth-graders in the UMB CURE Scholars Program who are anticipating their selective high school placements. They were among 80 scholars honored for 2017-18 accomplishments on May 5 by leaders including executive director Robin Saunders, EdD, MS, back row, far left.

On May 5, during the UMB CURE Scholars Program end-of-year celebration, these same students had become poised adolescents, beaming as they accepted honors for their work as eighth-graders and for gaining placements in selective high schools. They are known as Cohort 1, referring to the outcomes research that distinguishes UMB’s program. (View a photo gallery of the end-of-year event.)

Meanwhile, one week earlier, the eighth-grade scholars joined with their seventh-grade and sixth-grade fellow scholars at the April 28 UMB CURE STEM Expo. The topic of this year’s culminating research was Science, Technology, Engineering, and Mathematics (STEM). The expo provided the platform for all 80 scholars from all three cohorts to showcase their individually selected research projects through poster presentations and research articles included in the inaugural edition of the “UMB CURE Journal of STEM.”

At the expo, the keynote speech was given by the winner of the 2018 leadership award, Shereen Farquharson, a seventh-grader at GSA. On May 5, the award for CURE Scholar of the Year went to Samiatu Yussuf, a sixth-grader at SBCS.

At both events, held at the UM School of Pharmacy, a group from FSEMS was honored for completing the Saturday Science Academy, nine weeks of instruction at the National Institutes of Health in Bethesda, Md. The group consisted of seventh-graders Zoe Fisher and Janiya Andrews and sixth-grader Lynijah Russell.

“This is a longtime dream of mine, to take the children of our community and give them the opportunity to get excited about science and health care, and most importantly, about becoming successes,” Perman said.

He spoke at the expo during welcoming remarks to the dozens of parents, teachers, supporters, and mentors. The ratio of mentors to scholars is 5:1, and most of the 250 mentors are from the UMB community.

“Your children, our children,” he continued, “are well on their way to fulfilling that dream.”

The scholars have become accustomed to delving into science on Saturdays and during after-school activities held twice weekly. They competed at the expo in categories based on their chosen topics, ranging from artificial intelligence to nano-robotics, which were depicted on posters.

The scholar who gave the keynote speech had researched osteosarcoma, for example. She and her partner, GSA sixth-grader Najah Johnson, learned that this bone cancer afflicts children and young adults.

The girls answered queries from judges, who were mostly UMB volunteers, and from guests, including Perman.

The scholars also have used multimedia to spread their health knowledge, collaborating by Skype with a nonprofit organization, Health Disparity of Scarsdale, N.Y., to produce several videos that were shown at the expo. The scholars portrayed doctor, patient, and parent in scenarios such as a prenatal health check and an anti-smoking intervention.

The scholars in Cohorts 2 and 3 are anticipating three weeks of summer programming at UMB from June 25 to July 13 at sites such as the UM School of Dentistry, the UM School of Nursing, the UMSOP, and the URecFit pool at the Southern Management Corporation Campus Center. A field trip is planned to NASA’s Goddard Space Flight Center in Greenbelt, Md.

Throughout, the scholars are being motivated to aspire to careers in health care and research, surrounded by accomplished mentors and supporters.

Lin, who is CURE program director at CRCHD, gave advice to scholars in all three grades but directed her concluding remarks to those about to enter high school. For all, she spoke of overcoming adversity, describing a man who had fulfilled a childhood dream of becoming a surgeon. “One day he discovered he has a rare type of eye disease,” she said. He lost an eye and his sense of depth perception.

“Does he understand struggles and obstacles?” she asked the youngsters, who come from some of Baltimore’s poorest neighborhoods and continue to face adversity. Did he give up? No, she said. The physician changed course and became a successful researcher.

A majority of Cohort 1 will go to high school at one of three UMB CURE partners. Twelve chose GSA, a charter school for grades 6 through 12 that has been a UMB CURE partner since the outset. Two will go to Western High School, a college-preparatory high school serving young women. Seven will attend Dunbar High School, including five scholars who will enroll in Dunbar P-TECH, a six-year program that integrates high school and college coursework leading to an industry-recognized postsecondary degree in a health care field.

UMB CURE executive director Robin Saunders, EdD, MS, invited the eighth-graders to the front of the auditorium, congratulating them for their perseverance in overcoming tremendous challenges to achieve amazing results. Saunders went on to acknowledge each of the scholars by announcing their stellar high school placements and to thank their families for entrusting them to the UMB CURE Scholars Program. She went on to posit:

“This proves to everyone that when you were presented with this rigorous educational opportunity, you far surpassed our greatest expectations. I’m honored and proud to work with each one of you, and I know you’ll achieve continued success in high school.”