The University of Maryland, Baltimore (UMB) is again playing a role in civic affairs as its Community Engagement Center (CEC) hosts an early voting site for the 2018 primary election. Baltimore residents can vote and register to vote at the center from June 14-21.

Polls will be open during that period from 10 a.m. to 8 p.m. every day including Saturday, June 16, and Sunday, June 17. A space at 870 W. Baltimore St. has been designated for handicapped parking.

Before turning over the premises to the Baltimore City Board of Elections for the duration of early voting, the CEC involved children and their mentors in making decorations with a get-out-the-vote theme. 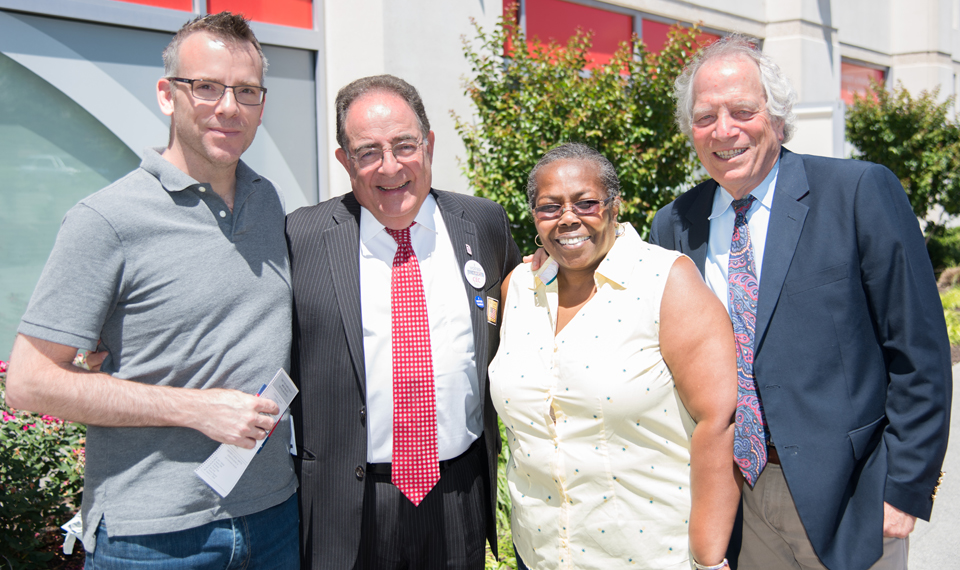 “I think it’s terrific that UMB can provide our neighbors a convenient place to vote, a place where they can show their children the importance of this civic right and civic responsibility,” says University President Jay. A. Perman, MD. “This is exactly what we do at the Community Engagement Center: We partner with our neighbors to strengthen our shared community. And central to that is electing and re-electing the leaders who understand our challenges, who share our vision for a better Baltimore and a better Maryland, and who will work with us to make that vision real.”

Perman came to cast his ballot June 14 at the CEC, where he encountered others involved in the Southwest Partnership (SWP), a coalition of seven neighborhoods and six institutions including UMB. The opening of early voting had drawn residents from Pigtown to Poppleton. (View a photo gallery.)

Dorothy “Dotie” Page, a leader with the SWP and an officer of Poppleton Now, said she was elated when the CEC was chosen as an early voting site. “It’s so easy and convenient to walk to our polling place,” she said. “I hope there’s a large turnout from our seven communities.”

One voter from Pigtown was Work Printing co-owner Rob Dickerson, who chatted with Perman and Page outside the CEC. They were joined by professor Doug Colbert, JD, who had strolled over from UM Francis King Carey School of Law to cast his ballot.

All could admire a window adorned with the letters VOTE. The cutouts were decorated by children and mentors in UMB’s Police Athletic/Activities League (PAL) program. Their art project has opened up a discussion about voting, said Kelly Quinn, PhD, CEC coordinator.

Quinn said the CEC has taken several steps to raise civic awareness among adults who participate in the center’s activities as well as to urge West Baltimore residents to vote. Canvassing SWP neighborhoods, volunteers recruited 11 people to register to vote and obtained commitment cards signed by more than 100 people who vowed to go to the polls during the primary, perhaps during early voting.

To further engage residents of surrounding neighborhoods, the CEC is holding a cookout and poll party on Saturday, June 16, on the adjacent lawn. The party is supported in part by a $1,000 grant from #BaltimoreVotes. The organization is a group dedicated “to providing all Baltimoreans, without prejudice or bias, the confidence to engage in every election.”

Attendees will receive a specially designed “Vote” button crafted by the CEC staff and volunteers using the Innovation Space at the UMB Health Sciences and Human Services Library.

To remind would-be voters of their vows to get to the polls, callers used CEC phones as a resource leading up to the early voting period. Volunteers were welcomed from UMB and other institutions in the University System of Maryland, whose stated goal is “to graduate civically literate students, who are prepared to accept their responsibilities as citizens in a complex and global interdependent world.” The Board of Regents Civic Education Workgroup presented a report, “Civic Learning and Democratic Engagement,” to the board’s Education Policy and Student Life Committee on May 15.

The get-out-the-vote volunteers included Sidney Pink, a student, employee, and instructor in the Department of Dance at Towson University.

Others involved in raising civic awareness at the CEC were UM School of Social Work student Sara Haile, UM School of Medicine student Ellen Moore, and Cpl. Hazel Lewis, who engages with children in the PAL program.

The CEC, which is located at 1 N. Poppleton St., is a part of the University of Maryland BioPark, as is the Lion Brothers Building. One of the latter’s new tenants, Neopol Savory Smokery, celebrated the first day of early voting with a donation. Co-owner Dorian Brown prepared a platter as a late-afternoon snack for the Board of Elections poll workers.

The proximity to the CEC was a boon for Jenny Owens, ScD, MS, faculty executive of The Grid, the entrepreneurial space also housed in the Lion Brothers Building. She was among UMB leaders who took advantage of having access on campus by voting early.

The CEC will reopen June 22. The PAL program is among the many activities involving neighborhood residents that will resume in late June. These range from yoga to a food market. (Call the CEC at 410-706-8260 for details.)