The University of Maryland, Baltimore (UMB) was the host as a group of new citizens took the oath of allegiance during a naturalization ceremony held at Westminster Hall by U.S. Citizenship and Immigration Services (USCIS), a part of the Department of Homeland Security. The ceremony was held on June 18 in advance of the international observance of World Refugee Day on June 20.

“This is a very special day in the story of your lives,” Luke Hall, section chief of USCIS Baltimore, told 49 applicants hailing from 26 countries. (View a photo gallery on Flickr.) 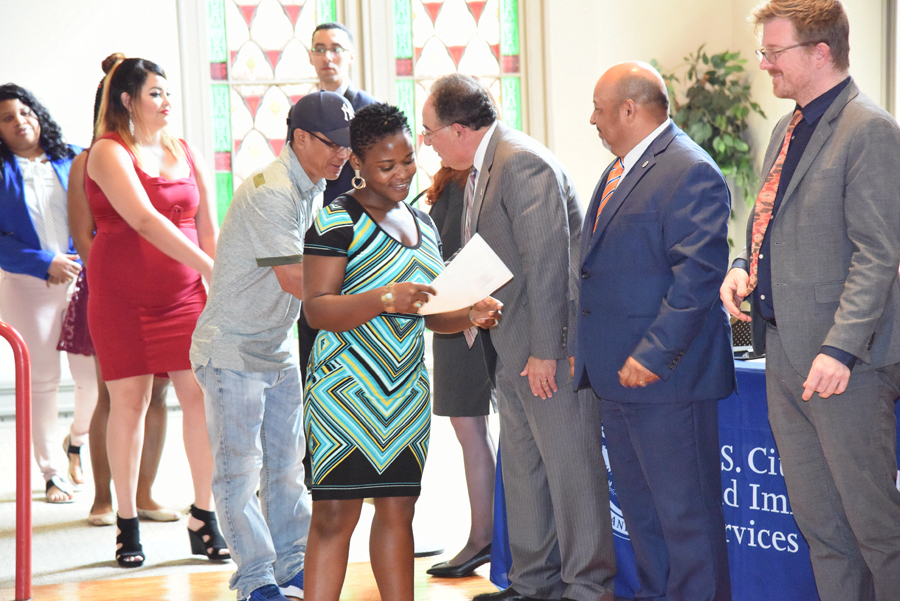 The individuals were greeted by the applause of family members and friends as officials read aloud names and nations, going from Bhutan to Ukraine.

It was fitting that one of the countries was Ukraine, the homeland that President Jay A. Perman, MD, said his parents had fled in the 1930s because of religious persecution. They had yet to meet each other and left separately “as tens of thousands of Jews were being brutally massacred … killed in massive pogroms intended to rid the country of my people,” he said. They found each other years later in Chicago. (The wedding photo of Rose and Max Perman can be viewed on Flickr.)

“They also found a close and loving community there, a community of their own, filled with people who sought refuge from tyranny and death in Eastern Europe,” Perman told the new citizens. “My father ran a hand laundry. My mother was a seamstress. We didn’t have much money. But what we did have — what I had — was the American Dream.

“It was always within my reach. I had an education. I had opportunity. I had a vision of a better future, and I had the means to make it real,” said Perman, who with the help of a scholarship attended college and earned a medical degree. He is a pediatric gastroenterologist and continues to practice in a weekly clinic.

Perman acknowledged the struggles of many other immigrants then and now and gave the new citizens a special charge. “I know that there are people in immigrant and refugee communities across the U.S. who have a very different story to tell. And so — now that you are citizens of this country — I ask that you be a loving and welcoming community to those who will come after you.”

He told the group that in addition to immense opportunity there is tremendous need in this nation, asking that they add care and compassion to the price of their citizenship. “I ask that you strive to make those around you as happy and as proud and as hopeful as you are right now — in this very moment.”

Given that Westminster Hall was brimming over with a palpable sense of pride and optimism, Perman was exhorting the group to a high level of commitment. Similarly, the other speakers sought to draw out the best in the women and men who had prepared for this day.

Conrad J. Zaragoza, field office director, USCIS Baltimore, praised their courage and urged them to hold tight to the heritage of homes left behind while at the same time embracing America. “I encourage you to immerse yourself in this nation’s political life. Use that voice,” he said.

The ceremony featured the presentation of colors by the Cryptologic Warfare Group Six Honors Color Guard; the national anthem performed by Taylor Sutton, immigration services officer, USCIS Baltimore; and the Pledge of Allegiance led by one of the newly naturalized citizens, Endam Josephine Fombe. In their oath, each renounced any foreign allegiance and promised among other things to support and defend the Constitution and laws of the United States against all enemies, foreign and domestic, and to serve in the military when required by law.

A video message from President Donald J. Trump was followed by the presentation of naturalization certificates by Christine Klobus, supervisory immigration services officer, USCIS Baltimore. As the new citizens approached the podium, Perman was among those offering congratulations and a handshake.

One new citizen was a retiree from Sharpsburg, Md., who was accompanied by an entourage of nine well-wishers. As a British citizen, journalist Simon Barber had gotten a green card in 1979. Nearly four decades later, he decided it was time to become a U.S. citizen, according to his son, Stephen Barber, a videographer with tripod in tow.

According to federal figures, 703,000 aliens were naturalized in Fiscal Year 2017, down from 753,000 in FY16. Just over 40 percent of those naturalized were from Mexico, India, Philippines,  China, Dominican Republic, and Cuba.

In Fiscal Year 2017, the United States admitted 54,000 refugees,  down from 85,000 refugees in FY16. Last year, 63 percent of refugees were from five countries: Democratic Republic of the Congo, Iraq, Syria, Somalia, and Burma. Ukraine and Bhutan were the sixth- and seventh-leading countries for refugees.

Since 2001, the United Nations and more than 100 countries have observed World Refugee Day annually on June 20.