When 17-year-old Jima Chester visited the University of Maryland, Baltimore Police Department (UMBPD) last summer to talk about the impact of trauma on youth, she didn’t know at the time she’d end up presenting officers a handcrafted gift that would be displayed at the department for years to come. Not only that, but it would also become a symbol of an emerging and promising relationship between UMBPD and youth of Baltimore. 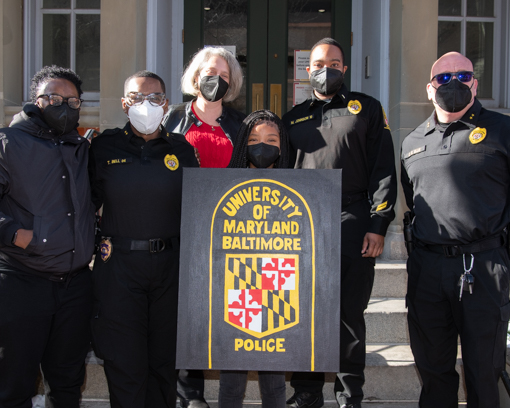 On Jan. 4, Chester presented Lt. Matthew Johnson, who leads UMBPD’s Community Outreach and Support Team (COAST), and Acting Deputy Chief Chad Ellis with an acrylic painting of the department’s traditional patch, as a gesture of appreciation for its willingness to reach out to area youths. (UMBPD Chief Thomas Leone, MSL, was unable to attend.)

“I painted this for the police department out of appreciation for all their genuine efforts and success with caring, bonding, and teaching youth,” Chester explained. “They probably don’t even know it but being around them and being able to see some of the things they do and experience created transparency and vulnerability between me and officers. The painting was a thank you for them helping me understand their job and for them understanding me and for treating me as family.”

In July, Chester gave a PowerPoint presentation on youths and trauma as an ambassador of the Healing Youth Alliance (HYA), a culturally responsive program focused on healing for African American youth. HYA is a collaboration among the University of Maryland School of Social Work (UMSSW), the Baltimore City Health Department’s Office of Youth and Trauma Services, and two Baltimore nonprofits: HeartSmiles, LLC, and the Black Mental Health Alliance.

Spending time with officers that day, and on subsequent visits to the department, has opened the West Baltimore resident’s eyes to a new way of thinking about law enforcement.

“We just had really good conversations,” she said. “They gave us a tour, we got to see the different parts of the department. Everybody was really nice. And we just kind of made a really good relationship and bond. It was a different outlook on police officers for me, living in the city all my life.”

Johnson said fostering strong relationships with the city’s youth is a key focus of UMBPD.

“The relationship between law enforcement and Baltimore City citizens can be contentious at times,” said Johnson, who grew up in Baltimore. COAST is working to build positive relationships with communities surrounding UMB.

The department is partnering with HeartSmiles to collaborate on programs that youths and UMBPD officers can plan together, Johnson said. HeartSmiles seeks to provide exceptional enrichment and leadership development opportunities to youths in Baltimore's most underserved communities.

“What we're trying to do to be different, to be at the cutting edge of policing is really digging deep in the community to build those bonds starting at a young age,” he said.

When Kyla Liggett-Creel, PhD, LCSW-C, clinical associate professor at UMSSW, introduced Johnson to HeartSmiles, he felt it was an excellent opportunity for youths to be invited to come to the UMBPD station to meet officers one-on-one.

Through her work with Baltimore youths and HYA, Liggett-Creel suggested to HeartSmiles president and co-founder Joni Holifield that she consider exploring a partnership between the nonprofit and UMBPD, which had already expressed an interest in the idea.

“I work with a lot of youth in Baltimore City. And unfortunately, I hear a lot of stories about how they've had really negative, scary, traumatizing interactions with police in Baltimore,” Liggett-Creel said. She had already been working with Leone and Johnson on other projects, including the UMSSW internship program with UMBPD. “I knew that this could be a healing relationship, and that my kids that I work with could benefit from being able to talk about what their experiences have been and have a positive experience with somebody in law enforcement, and that the police officers could benefit from hearing from the kids about what their experiences were.”

As eager as Liggett-Creel was to bring the two groups together, Holifield wasn’t having it. She was skeptical about UMBPD’s commitment to serving the community. “They didn't think that we were actually doing the community things that we do. So, I invited her to come,” Johnson said.

Johnson’s invitation to Holifield and HeartSmiles youths to visit the station was met with apprehension at first. Holifield readily admits she was not a fan of the idea. Now she describes the relationship UMBPD is building with HeartSmiles as an “amazing collaboration” she never expected to see.

“I'm not even gonna lie to you. I probably would not even be at this table had I not trusted Dr. K [Liggett-Creel], because when Dr. K first presented this idea, I was like, you know, no, no, it's just too bad.”

Some HeartSmiles youths have been recently released from incarceration or juvenile detention, Holifield noted. “So, it's a very, very, very sensitive situation. And we have young people who have been, in their words, victimized by police officers and law enforcement. But Dr. K said, ‘No, this will be different. These people are not like that.' She said meet them first and we’ll go from there.”

Within 10 minutes of arriving, “I knew Dr. K. was right,” Holifield said. “Just even in some of the language that they used about how they treat community. And us being able to roll up on some of the officers and see them engaged with community members on the corner, without knowing who I was, and just not how they were talking to them but also showing them respect. I mean, it was just something that was unheard of.”

So impressed was Holifield with UMBPD’s community outreach efforts that she shared her experience in a presentation she gave at the American Public Health Association Conference in Denver in front of an audience of 10,000 people attending the virtual and in-person summit.

“I said, ‘Well, lucky for y'all, I just saw a model in my own city that works,’” she said. “I'm happy but at the same time, I'm angry, because it's our best-kept secret and nobody is really taking this seriously and thinking OK, well, how can we scale this? How can we take this model and do something that's going to benefit the entire city and not just these few blocks?”

With Holifield’s skepticism abated, about 15 HeartSmiles youths visited the station in November for a tour and to share pizza with officers. They visited the roll call room where they took turns with MILO, a virtual training simulator officers use to depict real-life scenarios in which split-second decisions must be made.

“They really enjoyed it. Nobody wanted to leave at the end of the night,” Johnson said.

Plans are underway to do another collaboration with HeartSmiles this spring, expanding the number of participating youths. Johnson also wants to bring in members of different units from throughout the department to discuss career opportunities.

Johnson said he hopes teens let their peers know that police are people, too.

“No, we don't want our department to be some closed-off thing that the public can't see. We're transparent. We want people to be here,” he said.

Of the painting, Johnson said, “we had no idea that she was going to do anything like this. It’s touching and makes me feel like we're going down the right path.”