“We are up to $3,930,” he announced, a $20 increase from 10 minutes earlier and far more than some other — much larger — police departments across the state.

Johnson has organized a team of plungers from the UMBPF for the past 10 years, with the exception of last year when he was on military leave. This year, seven police officers and two police communications officers were on the team, which is called UMB Cool. (View video below) 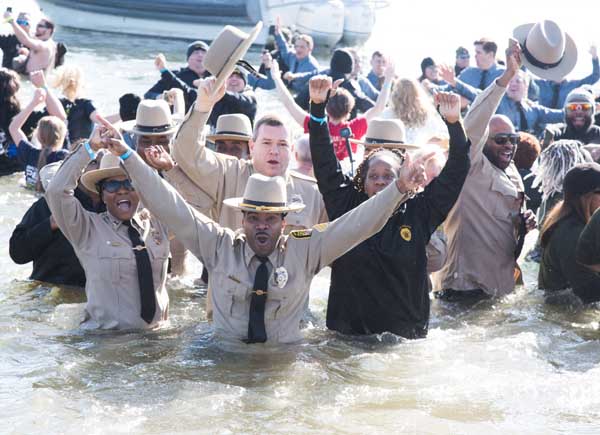 “I believe in the cause,” Johnson said. “My officers are motivated to do things for the community in general, and this is one of the ways we give back.”

The MSP Polar Bear Plunge benefits Special Olympics Maryland, which provides year-round sports training and athletic competition for people with intellectual disabilities. The main Polar Bear Plunge is held Jan. 27, but the Police Plunge was Friday, Jan. 26, and included officers from departments around the state and even a few Bobbies from England.

At a team breakfast before the plunge, rookie Pfc. Kevin Gaskins was plotting his strategy.

Gaskins said he’s always had a soft place for people with special needs and thinks it’s important to get out and help.

“These people are extremely talented. It takes a lot of toughness that I don’t have, but these people have it,” he said. “It’s a good cause.”

Pfc. Edouardo Edouazin, who was team captain along with Johnson, said he planned to take his time getting into the frigid water.

“I want to enjoy every second to say thank you to the people who donated on my behalf to the Special Olympics,” Edouazin said.

In reality, Edouazin — along with the others on the team and a few hundred other police officers — was in and out of the Chesapeake Bay within seconds. But he, Johnson, and Lt. Tom Leone went back in for a second plunge a few minutes after the first.

“The second time wasn’t as bad. You get more used to it,” Johnson said about a half hour later while warming up in the toasty police van. “I’m just getting my feet back.”

Leone said there were chunks of ice floating in the water that bounced off his legs when he was running in.

The water temperature was about 35 degrees and the air temperature was in the 40s. There was a light wind and the sun was shining — much better than a couple of weeks before, when the temps were well below freezing and the bay totally frozen in spots.

Johnson admitted he was a bit worried during the long December cold snap. He remembers the year it was 12 degrees and the ice on the bay had to be broken up so the plungers could get in.

“I had a hard time making myself leave home and act like I wanted to do it” that year, he said.

After the plunge and once she was back in dry clothes, Pfc. Kelli Blackwell said she loved every minute of the experience.

“I think this is so great. I like to give back and I’ll do anything for a cause,” she said. “It allows people to see police in a different light.”

Next year, Blackwell would like to see a team representing the entire University.

“Think of how much money we could raise for the cause as a University,” she said

Meanwhile, Johnson was not disappointed the team didn’t reach its $10,000 goal.

To make a donation to the UMB Cool team, visit its 2018 Police Plunge donation page.