Baltimore Mayor Catherine Pugh praised the University of Maryland, Baltimore (UMB) for its effort to encourage employees to “Live Near Your Work” in a post to her official Facebook account that urges others to spread the word.

In the mayor’s social media post on Jan. 25, she called attention to the kickoff event held Jan. 9 at the University of Maryland BioPark in which she spoke about the value of collaboration as the city seeks to increase its population and promote home ownership. 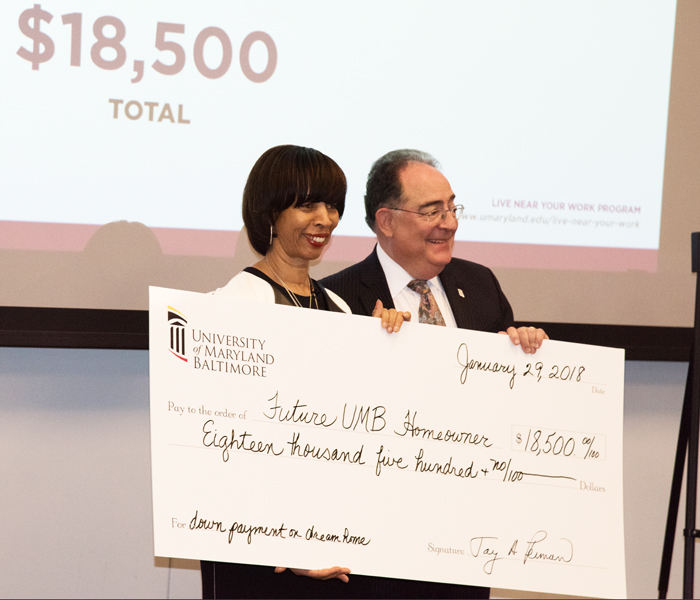 Baltimore Mayor Catherine Pugh praised University of Maryland, Baltimore President Jay A. Perman, MD, for UMB’s commitment to offer an incentive of $16,000, which when combined with a city incentive, would give qualifying employees a total of $18,500 to help buy a home.

(Video of her remarks at the kickoff appears on the mayor’s Facebook page and can be seen below.)

“This is an exciting opportunity because this is a homebuying assistance program (for eligible participants) that offers money toward the down payment and closing costs of homes in select Southwest Baltimore neighborhoods. This is in addition to Baltimore's Live Near Your Work Program,” the mayor wrote.

The post provided a link to the UMB website explaining the program for full- and part-time University employees. The University is contributing $16,000 toward purchase of a home and the city $2,500, for a total of $18,500 if various stipulations are met. For example, the individual must live in the home as a primary residence for five years.

Applications for the UMB’s program will be available Jan. 29.

In the video, the mayor observes that the incentives that have been put on the table say a lot “about what our partners are willing to do.” In addition to expressing gratitude to UMB, she named partners such as Live Baltimore, which is conducting a trolley tour on Jan. 27.

The tour departs the Southern Management Corporation Campus Center at 8:30 a.m. for stops in 10 city neighborhoods, including many of those in the UMB program. The eligible neighborhoods are Barre Circle, Franklin Square, Hollins Market, Pigtown/Washington Village, Poppleton, Mount Clare, and Union Square.

On Jan. 25, WBFF-TV published an article on Foxbaltimore.com announcing the mayor's video, called "How We Increase Population in Our City," and linked to information on UMB's initiative.

In her Facebook posting, Pugh urged visitors to share it. “Be sure to share and tag people you know who work at University of Maryland, Baltimore so they can see if they qualify to take advantage of this great opportunity,” Pugh wrote.